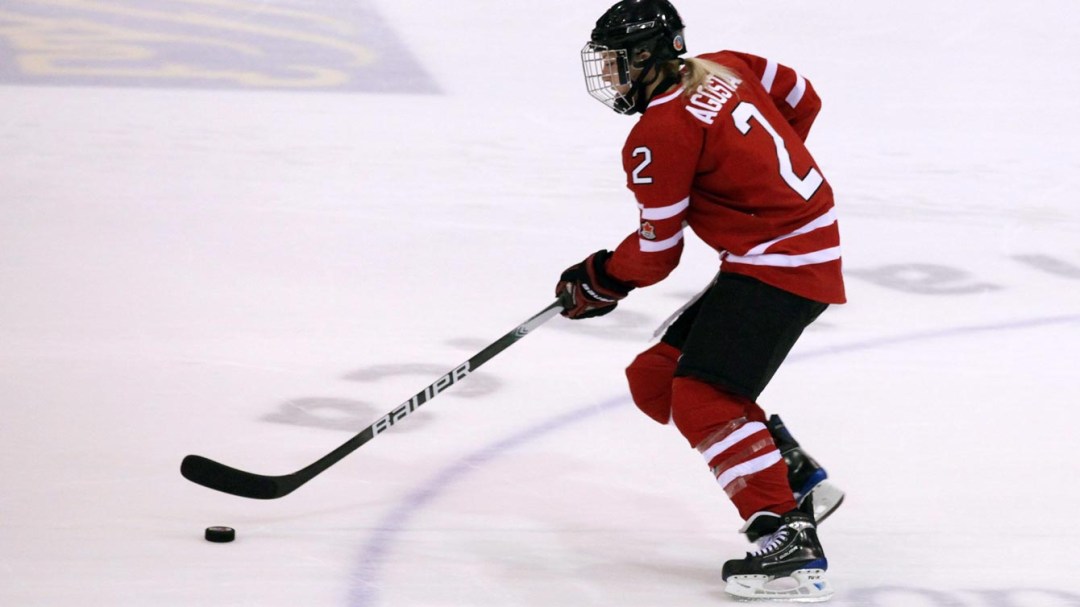 Meghan Agosta has been a member of Canada’s National Women’s Team since 2004. She has played in four Olympic Winter Games, winning gold at Turin 2006, Vancouver 2010, and Sochi 2014 followed by silver at PyeongChang 2018. With nine goals and six assists, she was the top scorer at the 2010 Olympic Winter Games and was voted Most Valuable Player and Best Forward as well as being named to the Media All-Star Team. Agosta has also been a part of eight world championship teams, winning gold in 2007 and 2012 to go with six silvers.

After Sochi 2014, Agosta took a break from hockey to focus on her police career. She returned to the national team program in the fall of 2015, competing at the world championships in 2016 and 2017. While playing for the Montreal Stars of the Canadian Women’s Hockey League in 2012-13, Agosta became the first player to win the Angela James Bowl in back-to-back seasons as the CWHL’s leading scorer. In 2011-12 she had set the CWHL’s single season scoring record.

Collegiately, Agosta had played for Mercyhurst College where she was named four times as a finalist for the Patty Kazmaier Award as the top women’s NCAA player. Without a CWHL team in Vancouver, Agosta keeps her skills sharp by practicing with a local Midget AAA team and playing for the Vancouver Police hockey team.

A little more about Meghan

Getting into the Sport: Was inspired to play hockey because of her older brother… Her older sister figure skated so her parents put her in that first but she was more interested in playing with a stick and ball on the neighbourhood streets… At age six, after a year of begging, her parents relented and registered her in hockey… In her first game, she scored 19 of her team’s 21 goals and was immediately moved up a level… She played with boys until peewee minor AAA because there was no girls team… Outside Interests: Enjoys playing golf and softball… Has her own hockey camp, Agosta’s High Performance Hockey Academy… Graduated from Mercyhurst College in 2011 with a major in Criminal Justice Law Enforcement and a minor in Criminalistics Psychology… Joined the Vancouver Police Department as a probationary constable in the fall of 2014… Graduated from the Vancouver Police Department Academy in May 2015 and became a sworn member of the force… Took a leave of absence to be centralized with the National Women’s Team in 2017-18… Odds and Ends: Growing up she admired Steve Yzerman and Cassie Campbell, who she says is the best captain she’s ever had… Always puts on the left side of her equipment before her right… Favourite quote: “Somewhere behind the athlete you’ve become and the hours of practice and the coaches who have pushed you is a little girl who fell in love with the game and never looked back. Play for her.”