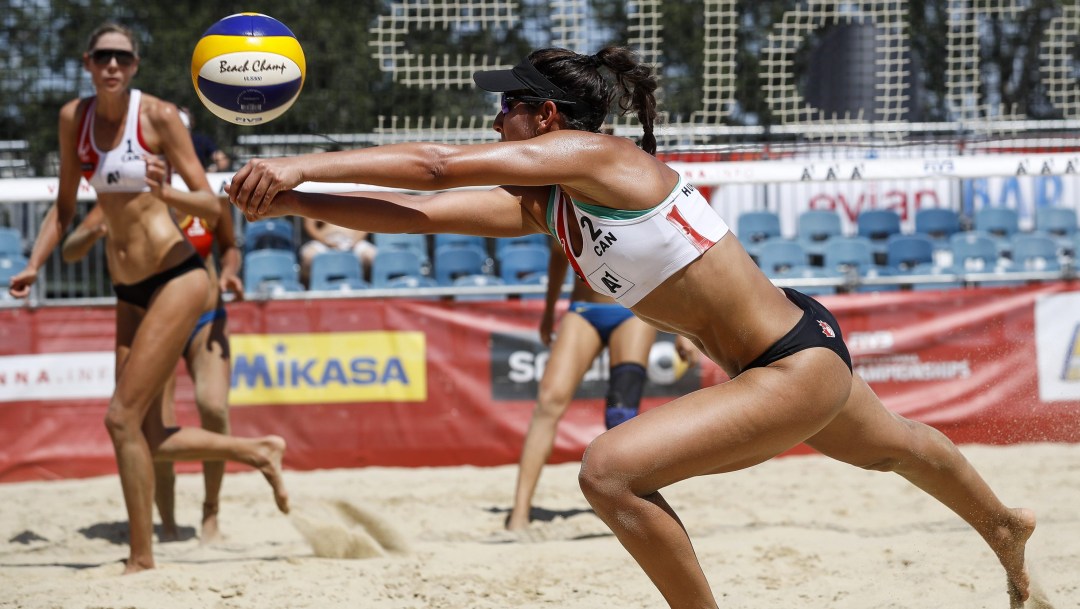 Since teaming up in the spring of 2017, Melissa Humana-Paredes and Sarah Pavan have been one of the top teams on the FIVB Beach Volleyball World Tour. In 2019, they made history as Canada’s first ever world champions in beach volleyball, a victory that secured their spot at Tokyo 2020, though they would also finish atop the FIVB Olympic Ranking. At the end of 2019, they were named the FIVB Most Outstanding Female Beach Volleyball Team. Humana-Paredes was also named the FIVB’s Best Defensive Player and Best Setter, the latter for the second straight year.

Humana-Paredes made her Olympic debut at Tokyo 2020 where she and Pavan were quarterfinalists, matching Canada’s best ever Olympic result in women’s beach volleyball.

Humana-Paredes and Pavan started their 2018 season by becoming the first ever Commonwealth Games champions in beach volleyball. At the end of this year, Humana-Paredes was honoured as the World Tour’s Best Setter.

Humana-Paredes’ played her first full season on the FIVB World Tour in 2014 with former partner Taylor Pischke. They posted a fifth-place finish at the Grand Slam event in Sao Paulo and won the NORCECA Continental Championship, all part of earning Humana-Parades Top Rookie honours from the FIVB. They went on to finish fourth at the 2015 Pan American Games in Toronto. Previously the duo had won back-to-back bronze medals at the 2013 and 2014 FIVB World Under-23 Championships. Humana-Parades was also a silver medallist at the 2011 World Junior Championships with partner Victoria Altomare.

Getting into the Sport: Started playing beach volleyball at age 12… Was exposed to the sport through her father Hernan and was hooked on the atmosphere as well as the fun, beautiful, and challenging nature of the sport… Hernan was the coach of John Child and Mark Heese who won beach volleyball bronze at Atlanta 1996… Brother Felipe was a national team athlete in beach volleyball… Outside Interests: Enjoys vlogging on her YouTube channel, playing board games, binge-watching TV shows… Loves going to concerts and supporting artists in small venues… Graduated in 2017 with a degree in  Communications from York University where she played four years and was the school’s female athlete of the year in 2012… Studying at the Smith School of Business…. Was an assistant coach with the York Lions in 2017-18… Odds and Ends: Nickname: Mel… Inspired by her parents for moving to a new country and learning a new language to give her the best life she could ask for…  Good luck charms include an elephant necklace and a lapis lazuli four-leaf clover… Favourite motto: “A ship in the harbour is safe, but that’s not what ships were built for”…