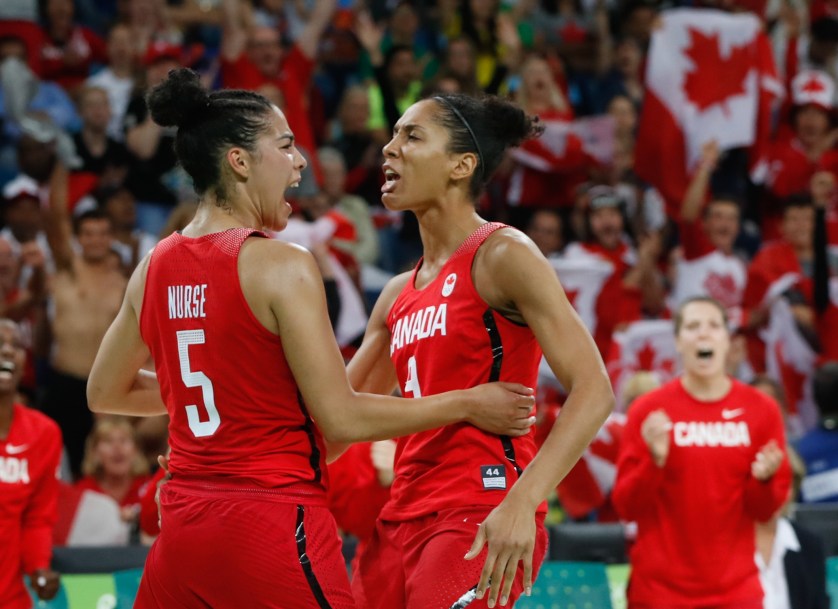 Miranda Ayim has been representing Canada since she was a junior, helping Canada to a silver medal at the 2006 U-19 FIBA World Championship qualifying tournament. During the summer of 2007, she played in both the U-19 and U-21 FIBA World Championships. Ayim was named to the senior national team in 2008 and helped Canada qualify for London 2012, putting the women’s team in the Olympic tournament for the first time since 2000.

She made her debut at the FIBA World Championship in 2014, averaging 8.3 points and a team-leading 5.4 rebounds in helping Canada to a fifth-place finish, the country’s best result since 1986. In 2015 she helped Canada win gold on home soil at the Pan American Games in Toronto, averaging 7.8 points per game. She was also part of the Canadian team that won the 2015 FIBA Americas Championship, qualifying the squad for Rio 2016. In her second Olympic appearance, she averaged 17.3 minutes per game as Canada made it to the quarterfinals.

After taking some time off to start 2017, she rejoined the national team at the FIBA AmeriCup where she served as captain as Canada won gold. She was named to the tournament all-star team on the strength of her 22.8 minutes per game in which she averaged 14.5 points per game.

During the 2018 FIBA World Cup, Ayim contributed a total of 42 points and 15 rebounds as Canada finished seventh. In 2019, she helped Canada to a silver medal at the FIBA AmeriCup and averaged 11.3 points per game at the FIBA Olympic Prequalifying Tournament as Canada advanced to the next phase. In February 2020, she played 59:05 as Canada went 3-0 at the FIBA Olympic Qualifying Tournament to book their berth at Tokyo 2020. Ayim was given the honour of serving as Team Canada’s Opening Ceremony flag bearer at Tokyo 2020 alongside rugby player Nathan Hirayama.

Ayim had one of the top careers in Pepperdine University history during her four years there. A three-time All-WCC first team selection and three-time WCC All-Academic selection, Ayim set the school record for blocked shots with 182, including a single season record of 85 in her senior year. In 2009-10 she was chosen as the Division I-AAA women’s basketball Scholar-Athlete of the Year. Since graduation, Ayim has played basketball professionally in various leagues from the WNBA to the top leagues in France (LFB) and Turkey (TKBL).

A Little More About Miranda

Getting into the Sport: Has been playing basketball since she could walk, drawn towards its propensity for intensity and speed as well as the level of athleticism and intelligence required to compete at a high level… Outside Interests: Graduated from Pepperdine University in 2010 (Public Relations and Psychology)… Enjoys reading and, when there is time off in between competitions and training, visiting friends, family and squeezing in a small vacation… Odds and Ends: Favourite quote: “It’s never too late to be who you might have been.” – George Eliot… Nickname: MJ…