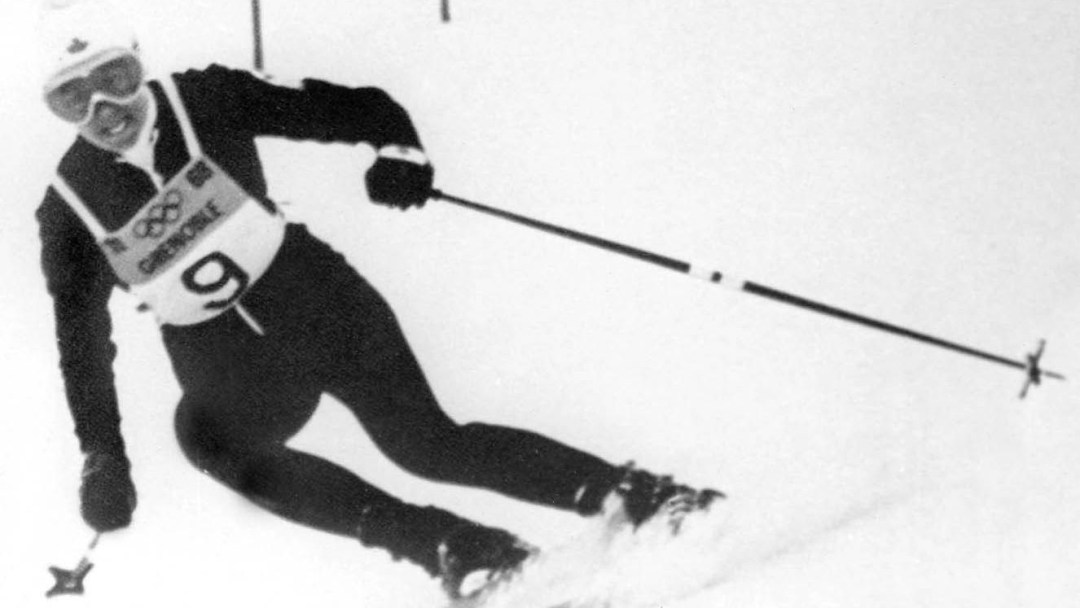 Three-time Olympian Nancy Greene was just 16 when she made her Olympic debut at Squaw Valley 1960, alongside her sister Elizabeth, with modest results in three events. In her second Games, Greene’s top finish at Innsbruck 1964 was seventh in the downhill where the Austrians swept the podium in front of their home crowd.

Despite not finding much success in her first two Olympic appearances, Greene was Canada’s Opening Ceremony flag bearer at Grenoble 1968. She was brimming with confidence when she arrived in France, having broken the European dominance of the sport to win the 1967 overall World Cup title and knowing she could go home with three Olympic medals. But a mix-up with her ski wax left her 10th in the Olympic downhill, leaving her anxious and desperate with two chances left – the slalom and giant slalom.

Greene went for broke in her next race and won a silver in the slalom. Still dissatisfied, she was the heavy favourite in the giant slalom and determined to win Olympic gold. To distract from her race day nerves, her coaches took her out for a snack and chat about ski politics, arriving at the start hut with minutes to spare. With technical precision, Greene executed an impeccable run, winning by a massive 2.64 seconds, in what was the largest margin of victory in the history of the event. After the Games, Greene won every race for the next month in all disciplines and won her second World Cup title. She was greeted by more than 100,000 fans dressed in green in Vancouver when she finally arrived home.

Greene’s memorable skiing career included 13 World Cup victories and 17 Canadian championships in all disciplines. When she won the inaugural World Cup in 1967, she won seven of 16 events (four giant slalom, two slalom, one downhill) and was named 1967 Canadian Athlete of the Year, an award she also received in 1968.

Having joined the national team in 1959, Greene retired from competitive skiing at 24. In 1969, she married Al Raine, and together they continued to make skiing their life’s work. They had twin boys (one of which, Willie, became an Olympic skier at Albertville 1992), developed ski tourism in their home province of British Columbia, built ski lodges, started a ski league in her name (entry level race program for young children), volunteered as race officials, and served on committees for federations.

Parks and lakes and roadways have been named in her honour including “Nancy Greene Provincial Park”, “Nancy Greene Lake” and “Nancy Greene Way.” Involved in both of Canada’s Olympic Winter Games Opening Ceremonies, Greene was a torch bearer within BC Place along with Steve Nash, Rick Hansen, Catriona Le May Doan and Wayne Gretzky at Vancouver 2010 and a bearer of the Olympic Flag at Calgary 1988.

Greene was appointed as Senator for British Columbia for the Government of Canada in 2009 and remained a passionate advocate for health and fitness, playing a key role in establishing the first Saturday in June as National Health and Fitness Day in Canada.

Perhaps the most famous name in Canadian alpine skiing, in 1999 Greene was named Canada’s Female Athlete of the 20th Century by Canadian Press. Among her many other tributes, Greene twice won the Lou Marsh Trophy (1967, 1968), was made an Officer of the Order of Canada and a member of the Order of British Columbia in 1968, had her name was placed on Canada’s Walk of Fame, was made a member of the British Columbia Sports Hall of Fame, the United States National Ski Hall of Fame, and was featured on a Canada Post stamp. Greene was inducted into Canada’s Sports Hall of Fame in 1967 and Canadian Olympic Hall of Fame in 1971.