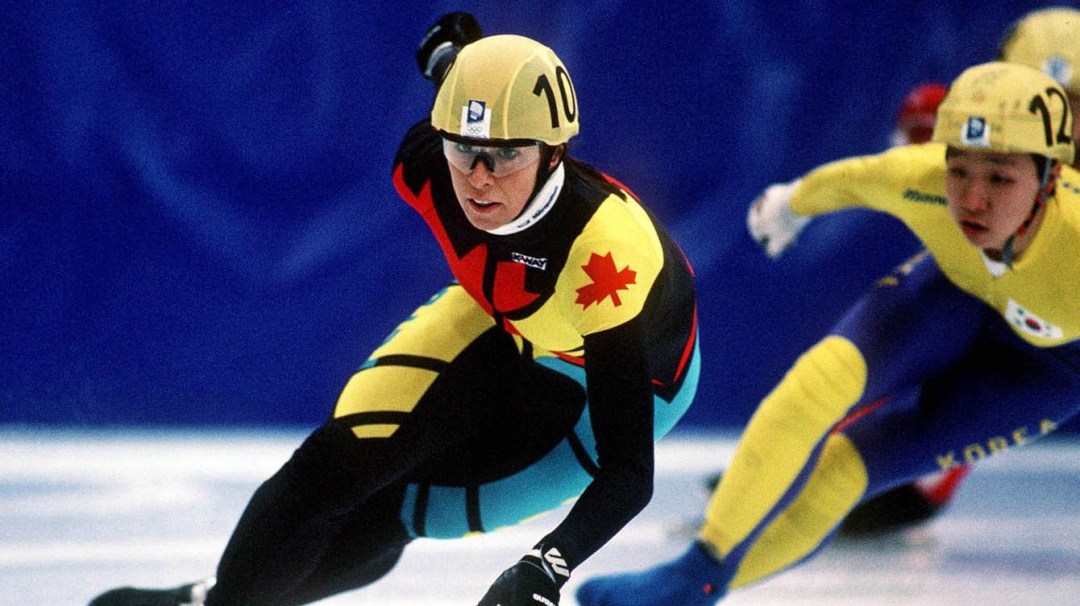 At Calgary 1998 short track speed skating was a demonstration sport and Nathalie Lambert made her first appearance at the Olympic Games. She had four top-10 finishes including finishing third in the 3000m relay. By Albertville 1992, Lambert was a multiple World champion and short track was on the official Olympic program. Despite the 500m not being one of her strongest events, Lambert’s chances for gold increased after the two favorites were eliminated in the heats, but she fell in the semi-final and did not advance. Lambert was a member of the Canadian relay team that arrived in Albertville having won six straight World Championships and 10 of the last 11 championships in the 3000m relay. The anticipated duel between Canada and China (the world record holders) never materialized when China crashed in the semi-final. In the final, Lambert and her teammates held off every challenge the Americans presented and won the gold medal. Lambert carried Canada’s flag during the Closing Ceremony.

In her final Olympic appearance at Lillehammer 1994, Lambert, along with Canadian teammate Sylvie Daigle, were the only two skaters from the 1992 Olympic gold medal relay team. The Canadian team arrived in Norway having not lost a major race in six years. In the 3000m relay final, Christine Boudrias crashed taking the Canadians out of the running for gold. But a Chinese disqualification promoted Lambert and her team to the silver medal. Four days later, 30-year-old Lambert captured her first individual Olympic medal in the 1000m silver, the other two medalists were teenagers.

Despite not winning an individual Olympic gold medal, Lambert was widely regarded as one of the best short track speed skaters in history. She captured 20 World Championship medals (16 gold, two silver, two bronze) and won the Overall All-Around three times (1991, 1993, 1994). At the 1991 World Championships, Lambert won every gold medal available (1000m, 1500m, 3000m, 3000m relay, all-around) dethroning her legendary teammate, five-time overall World champion Sylvie Daigle. From 1986 to 1994, Lambert was a member of every Canadian 3000m relay team that won nine consecutive gold medals. During her 22-year career, she set four world records: two in the 1000m (1985, 1993), one in the 3000m (1987) and one in the 3000m relay (1993). A broken ankle in late 1997 ended Lambert’s hopes of participating at Nagano 1998. When the osteoarthritis in her knees worsened and she lost muscle mass and strength while off with her ankle injury, she officially retired.

Growing up in the Le Plateau-Mont-Royal area of Montréal, Lambert started speed skating at the indoor rink across from her family’s home – a legacy facility of Montréal 1976. While she first specialized in long track, she also gained experience in short track by virtue of the available training facilities. She represented Québec at the 1979 Canada Winter Games in Brandon, Manitoba and then made the switch to short track in 1983.

Lambert studied physical education at the Université de Montréal. She married physical education teacher Daniel Gaudette and they adopted two daughters from China. Devoting her life to sports as a coach, official, mentor, instructor and administrator, Lambert was Team Canada’s assistant Chef de Mission at Athens 2004 and Chef de Mission at Vancouver 2010. She sat as chair of the Short Track Technical Committee at the International Skating Union. Her professional career included promoting fitness at a Montréal health club.