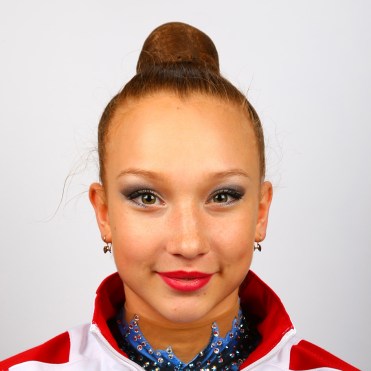 An emerging star of Canadian rhythmic gymnastics, Patricia Bezzoubenko was the top gold medal-winning athlete from any sport or country at the 2014 Commonwealth Games where she captured six medals, including five gold. Proficient across all apparatuses, Bezzoubenko won gold in the all-around as well as three of the individual events and helped the Canadian team to a dominant victory. She went on to qualify for the all-around final at the FIG World Championships, competing against the sport’s elite from Europe and Asia. Earlier in the year Bezzoubenko won the all-around title at the Pacific Rim Championships and was a multi-medallist at the Pan American Championships. A dual citizen of Canada and Russia (a hotbed for the sport), Bezzoubenko splits her time between Toronto and Moscow where she trains with members of the Russian national team.

Family: Mother Snezhana Dorogan… Getting into the Sport: Started rhythmic gymnastics after moving to Russia when she was four… Joined the elite national program run by legendary coach Irina Viner… When it became known she had a Canadian passport, her coaches contacted Svetlana Joukova because her future in the sport had more possibilities in Canada… Has never felt more Canadian than when the anthem played and the flag was raised at the Commonwealth Games… Odds and Ends: Shares a birthday with the only Canadian to win an Olympic rhythmic gymnastics medal, Los Angeles 1984 gold medallist Lori Fung…