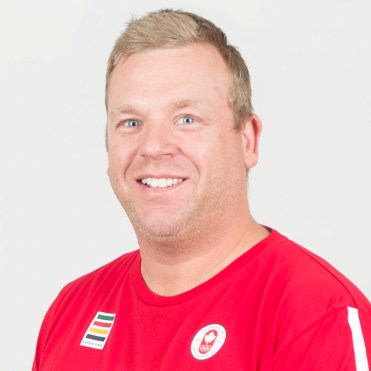 Family: Parents Johan and Irene Koert… Brother Bastien, sister Peggy… Moved to Canada at age 2 when his father was transferred from his position at IBM in the United States… His father came close the making the Olympic track and field team for the Netherlands… Wife Allison Koert… Children Gabrian and Asher…

Getting into the Sport: Started playing softball at age 10… Wanted to play for Team Canada after winning the national championship at an early age… After making the U19 national team, the desire to be world champion and play competitive fastpitch for 20 years drove him… Outside Interests: Enjoys golf, baseball, hockey, swimming, the cottage life… Works as vice-president of sales for Scil Animal Care… Odds and Ends: Favourite motto: “Adversity causes some men to break, others to break records”… Role models include Nolan Ryan and ,specifically for fastpitch, Darren Zack and Todd Martin… Nicknames: Koerty, Lefty, PK… Always carries change in his back pocket and has used the same glove for years…