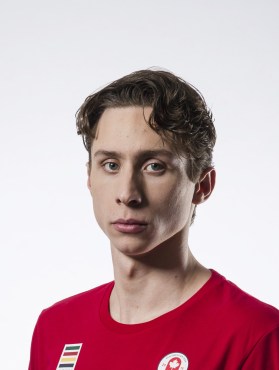 Russell Wood had a memorable 2013 season when he qualified for his first FINA World Championships and earned two top-ten finishes at the Universiade. Another highlight was defeating American star Ryan Lochte to win 100m backstroke gold at the Mel Zajac Canada Cup. For Wood, making it to the world championships changed his whole life because it suddenly became realistic that he could represent Canada at major international events. His success continued in 2014 when he swam in five finals at the Commonwealth Games, just missing the podium in the 4x100m medley relay. He also competed at the Pan Pacific Championships and won three gold medals at the CIS Championships for the University of Calgary Dinos, sweeping the backstroke events. After sweeping the backstroke events at the 2015 Canadian Trials, Wood made the finals in both the 100m and 200m backstroke at the Pan Am Games in Toronto and won a bronze medal with the 4x100m medley relay. A few weeks later he competed at his second FINA World Championships.

Family: Parents Harvey and Margo Wood… Older sister Alana… Getting into the Sport: Started swimming at age 9… Saw the charter bus his sister rode to swim meets and was so jealous that he wanted to start so he could also ride the bus… Was disqualified in his first-ever race… Inspired by Michael Phelps’ 8 Olympic gold medals and Mark Tewksbury’s gold medal at Barcelona 1992… Outside Interests: Two years complete at the University of Calgary; has put school on hold until after Rio 2016… Enjoys playing computer games, camping, and playing with his cats…Odds and Ends: Collects pins and headwear from this travels… Is close friends, and has a friendly rivalry, with relay teammates Coleman Allen, Richard Funk, and Yuri Kisil… Inspired by Ryan Cochrane’s talent and professionalism… Nicknames: Russ, Gabriel…