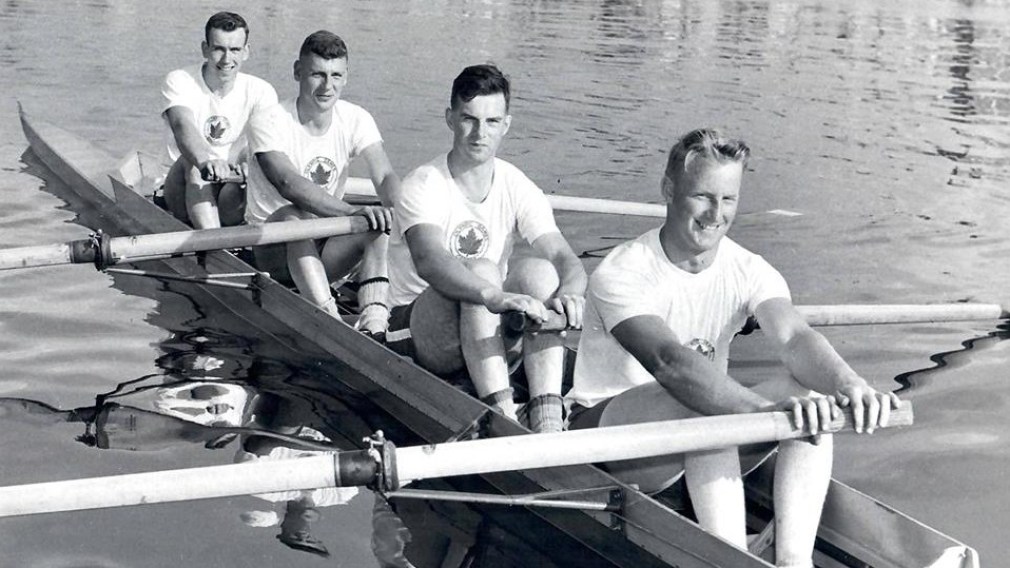 Walter d’Hondt had only been a member of the University of British Columbia’s (UBC) coxed eights crew for a year and as part of their training they competed at the Canadian Olympic Trials in the coxless fours, which they won, and went on to represent Canada at Melbourne 1956. In the Olympic final, it was no contest in the race for gold. D’Hondt, with the “Cinderella 4” teammates of Don Arnold, Lorne Loomer and Archie MacKinnon, took the lead at the half-way point, winning by 10 seconds over the Americans. It was Canada’s first Olympic gold medal in rowing. At Rome 1960, D’Hondt was on the Canada eights crew that was represented by UBC’s men’s eight crew and were by no means the favourites to win the gold medal. In the Olympic final, the Canadian crew remained even with the favoured boat until, with 200m to go, the Germans pressed ahead, and d’Hondt won a silver medal, with teammates Arnold, David Anderson, Sohen Biln, Nelson Kuhn, John Lecky, MacKinnon, Bill McKerlich and Glen Mervyn. It was Canada’s only medal of the Games and his final race.

In the men’s eights at the 1958 British Empire and Commonwealth Games, d’Hondt along with his gold medal winning coxless fours team at Melbourne 1956 won the gold medal, the
Canadian team dominating the competition.

Graduating from England’s prestigious John Fisher School in Surrey, d’Hondt was the third best hammer thrower in England at under-18 level and when he moved to Canada to compete, he
became the national champion. He lived and worked as an engineer in Seattle, Washington at Boeing. He had two daughters and three sons. His sister Danica d’Hondt was Miss Canada
1959 and a Canadian-American-British actress, restaurateur and author; daughter Gillian d’Hondt was an international basketball player; and niece America Olivo was a film actress.