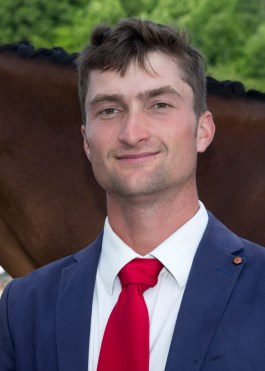 Waylon Roberts has been representing Canada in international competition since the age of 14, when he attended the 2002 FEI Children’ Final for Show Jumping in Brazil. From there, he went to ride for Canada at the North American Young Riders’ Championships on five separate occasions. In 2007, at just 18, Roberts forewent the North American Young Riders’ Championship in order to compete for Canada at the Pan American Games in Rio de Janeiro, Brazil, where he was a member of the silver medal team. He spent the 2009, 2010 and 2011 seasons in England, where he trained with show jumping master John Whitaker and also worked as assistant trainer for British eventing rider Oliver Townend. He is currently back in North America training with well-known American eventer Phillip Dutton and has been enjoying tremendous success. In 2014, after acquiring the ride on Kelecyn Cognac, Roberts competed at the Fair Hill International, finishing fourth in the CCI 2* in a field of 120 riders. Roberts was the top placing Canadian, delivering the best Canadian CCI 2* result in North America in over two years. Since the start of the 2015 season Roberts has continued to prove himself as one of Canada’s top eventers, earning four top-10 results at the 2* and 3* level with Kelecyn Cognac and Bill Owen.

Family: Parents Ian Roberts (Athens 2004, eventing) and Kelly Plitz (Los Angeles 1984, eventing) were both Olympians, making him born to be an eventer…Says his father is his role model for never losing his focus and drive to compete for Canada… Younger brother Wyatt… Getting into the Sport: Grew up watching his parents ride and teach, and has been attending eventing competitions since the age of two… Outside Interests: Competed in diving at the provincial level… Enjoys doing home and vehicle improvements.. Odds and Ends: Sporting philosophy: “It is really about getting on horses. You need to have good eyes on the ground and you have to get on as many horses as you can.”