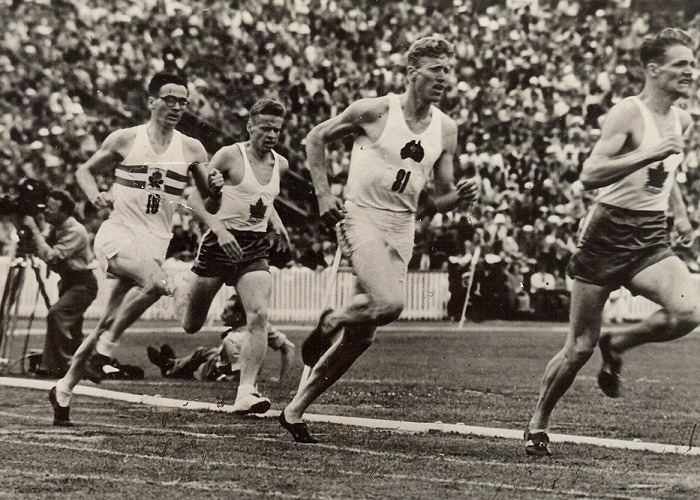 In his Olympic debut at London 1948, middle distance runner Bill Parnell did not advance out of the first round of the 800m and 1500m. At Helsinki 1952, Parnell was chosen to carry the flag of Canada in the Opening Ceremony in what was the proudest moment of his running career, and then he reached the semi-finals in both the 800m and 1500m.

Parnell found his greatest success at the 1950 British Empire Games in Auckland where he won a bronze medal in the 880 yard race, and was the only Canadian ever to win a Commonwealth Games gold in the mile, where he set a Games record. His record would stand until Roger Bannister and John Landy bettered it in the ‘Miracle Mile’ four years later. Following his Commonwealth Games victory, Parnell was honoured with a civic reception and a “Bill Parnell Day” celebration in his hometown of Vancouver. At the 1954 British Empire and Commonwealth Games, he captained the Canadian team taking the athletes’ oath in the Opening Ceremony at the then-brand-new Empire Stadium, finished seventh in the 880 yard race and did not advance to the mile final.

Born and raised in Vancouver, Parnell originally was a high school high jumper but his daily run to school to beat the morning bell improved his running skills. He attended Washington State University on athletic scholarship and in 1951, Parnell was named to the All-American College track & field team by the National Collegiate Athletic Association (NCAA).

Once retired from competing, Parnell taught physical education and coached football, basketball, and track and field at Delbrook High School in North Vancouver from the day it opened in 1957 until the day it closed in 1977 due to a major fire. He moved to Handsworth Secondary School and retired as a teacher in 1988, but continued coaching until just before his death in 2008. The North Shore Secondary Schools’ Athletic Association recognized Parnell with a 50-year-coaching award.