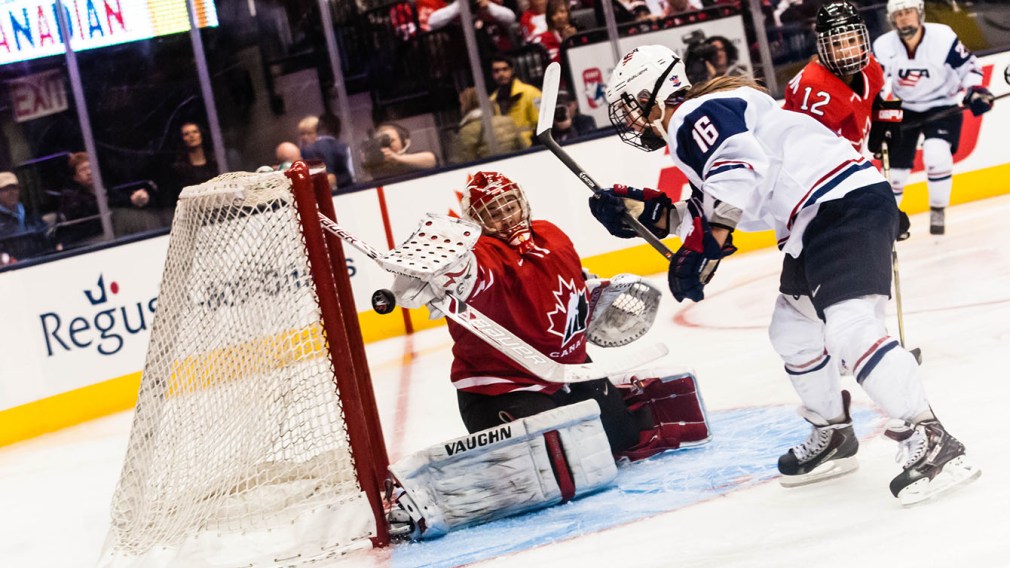 Canada’s National Women’s hockey team closed out 2013 with a 3-2 loss Monday night to Team USA at the Air Canada Centre in Toronto.

It was also the final tilt in a six-game exhibition series between the two teams where Canada had a 2-4 record. All of their losses came in the most recent four games.

After a scoreless first, the United States broke the zeroes at 2:32 of the second when forward Hilary Knight reached out and got a stick on a Kelli Stack feed through the slot.

Only 51 seconds later it was Stack who managed to beat Geneviève Lacasse again. It was a powerplay goal because of a Brianne Jenner hook.

Stack finished with one goal and two assists including a contribution to the third USA tally by setting up a second period Megan Bozek shot four seconds into a Hayley Wickenheiser holding penalty.

Despite getting a late second period goal from Natalie Spooner and a shorthanded notch from Brianne Jenner in the third, the Canadians spent too much time a man or two down. The team took eight minors in the game. “The confidence is not there right now, there’s areas of our game tonight that were unacceptable. We lost too many races to the puck, we took too many penalties and it’s hard when you have to kill so many penalties and on the other end we have to do better on our powerplay,” said veteran forward Caroline Ouellette after the game.

The announced crowd was 17,227 in a nearly full Air Canada Centre. But Ouellette and the rest of the Canadian team weren’t able to use the energy, “We had a great crowd behind us and I’m sad that we weren’t able to give our fans a better show.”

In October, Canada won the first two match-ups in Burlington, Vt. and then Boisbriand, Que.

The US would then take three straight in December, first in Calgary, then Grand Forks, N.D. and St. Paul, Minn.

There was also a meeting in the Four Nations Cup, Canada won that 4-2 and went on to win the tournament. Team USA finished third.

The series had some larger margins, and was hence speckled with nastiness, including a few bench clearing dust-ups. But mainly, the series was a process for the players and coaches.

“We’ve been trying to find some stability in our group, keep our lines the same, that’s always a process. You’re trying to find players that compliment each other,” said head coach Kevin Dineen.

The team will take a three-day break before continuing the midget series in Canada, and closer to the Sochi Games a 10-day trip to Austria where further exhibition contests are scheduled.

“We feel that playing the games is really beneficial for our group, I think there are areas we need to work on and we’ve talked about it,” said Dineen.

The experienced Ouellette seems to have been listening to her coach’s directions, “We have to figure out our personnel in practice and every day until we know exactly where we are we and feel comfortable with each other.”