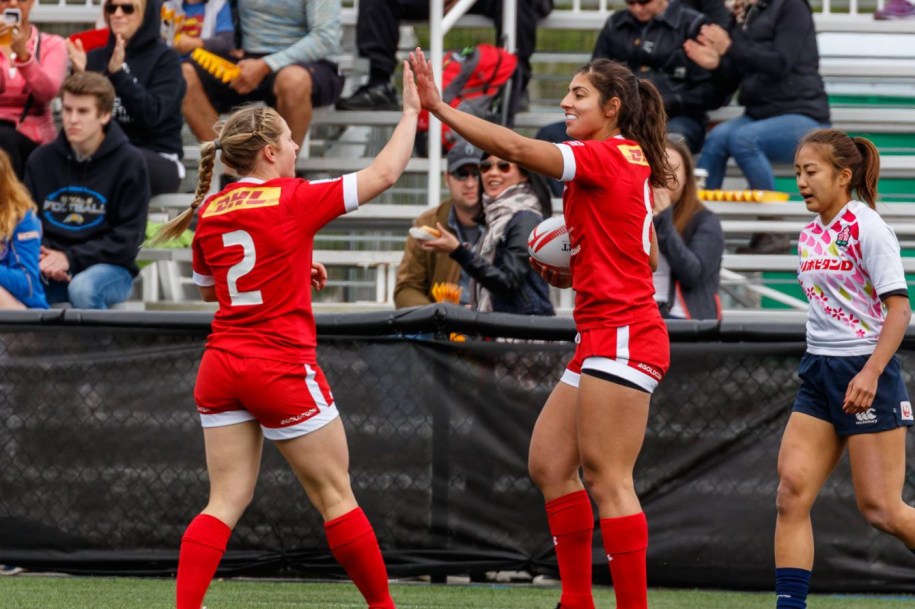 The Canadian women are riding a wave of success after winning the World Rugby Sevens Series finale in Clermont-Ferrand. Now they’ve learned who their opponents are on their Olympic debut.

This week it was learned that Canada will be drawn in a group with Great Britain, Rio 2016 host Brazil and the country that will welcome the world to the following Olympiad, Japan.

Both the men’s and women’s rugby sevens competitions will consist of 12 teams. In each competition the teams will be split into three pools of four for the opening stages. Upon completion of the pool matches, the top two teams from each grouping, plus the two best third-placed sides progress to the quarter-finals. 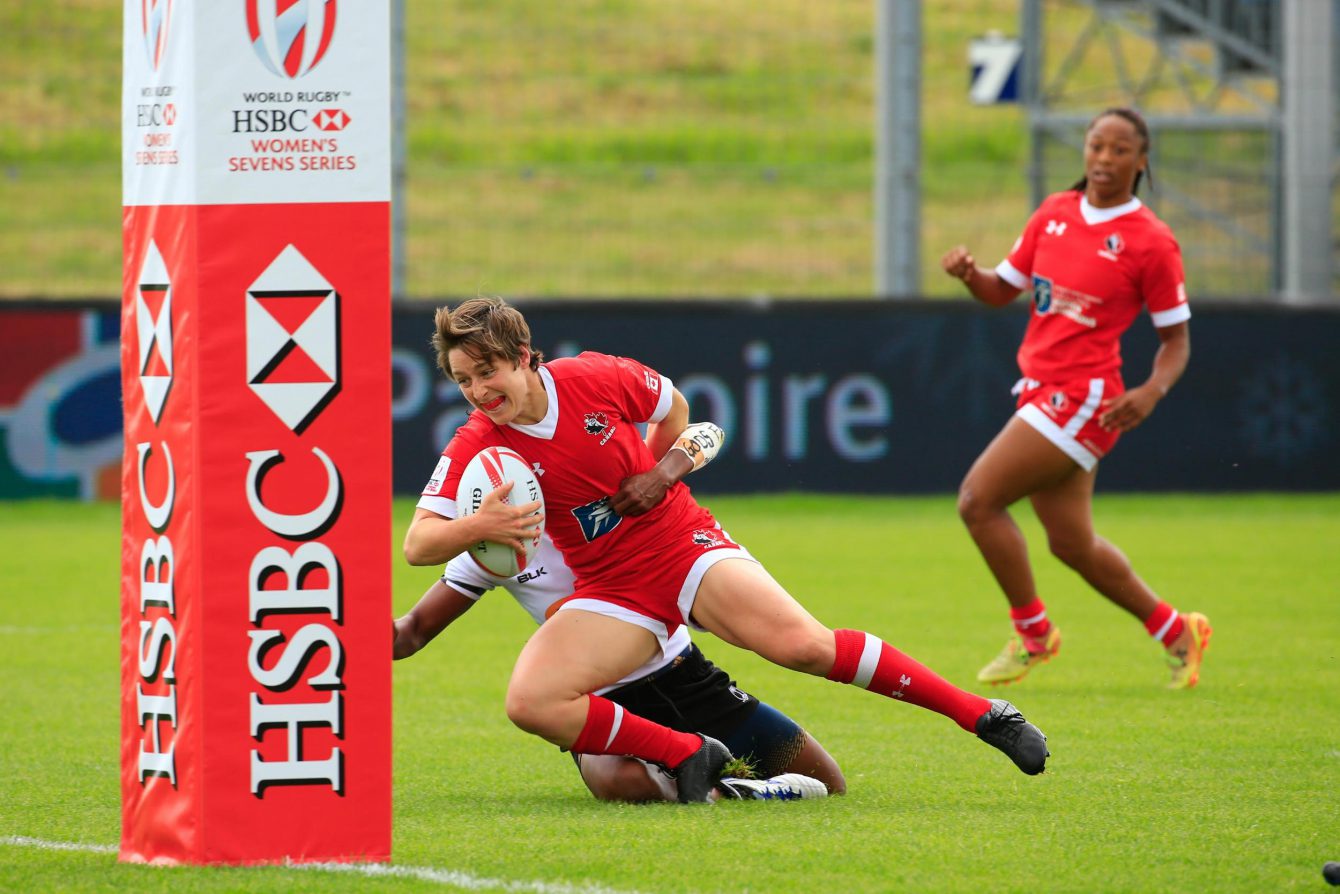 Ghislaine Landry approaches the try line at Clermont-Ferrand in the 2015/2016 World Rugby Sevens Series (Photo: I Picarel via World Rugby).

Pools were determined based on the team’s World Rugby Sevens Series seed from the previous two seasons of competition. Canada automatically earned a top four seed by finishing second in the 2014-15 Sevens Series. From there, the Canadian women earned a third place seed for Rio 2016 based on their combined score over the past two seasons. Topping Canada on the list are number one seeded Australia and no. 2 New Zealand, both obvious medal contenders. Great Britain will round out the top four. 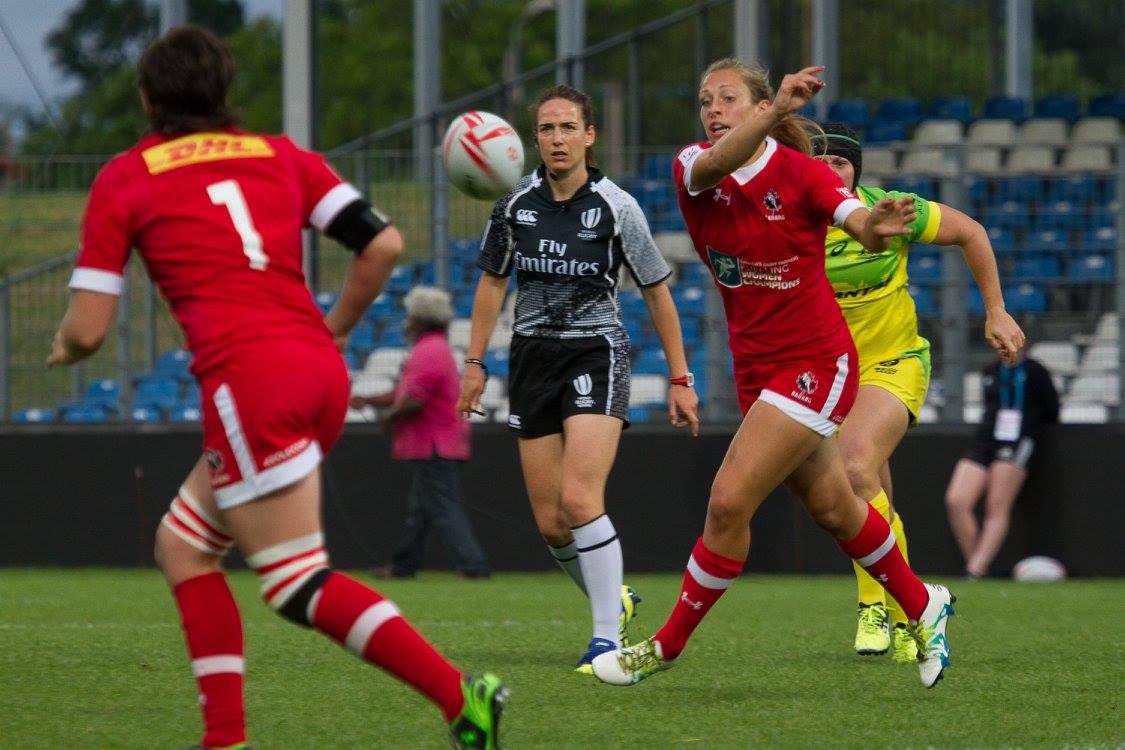 Megan Lukan makes a pass to Britt Benn in a match at Canada Sevens in April 2016 (Photo: Rugby Canada).

As the top seeded team in Pool C, Canada will face Great Britain, Brazil, and Japan in the first round of competition. The pools for the Rio 2016 Women’s Rugby Sevens Competition will be as follows: 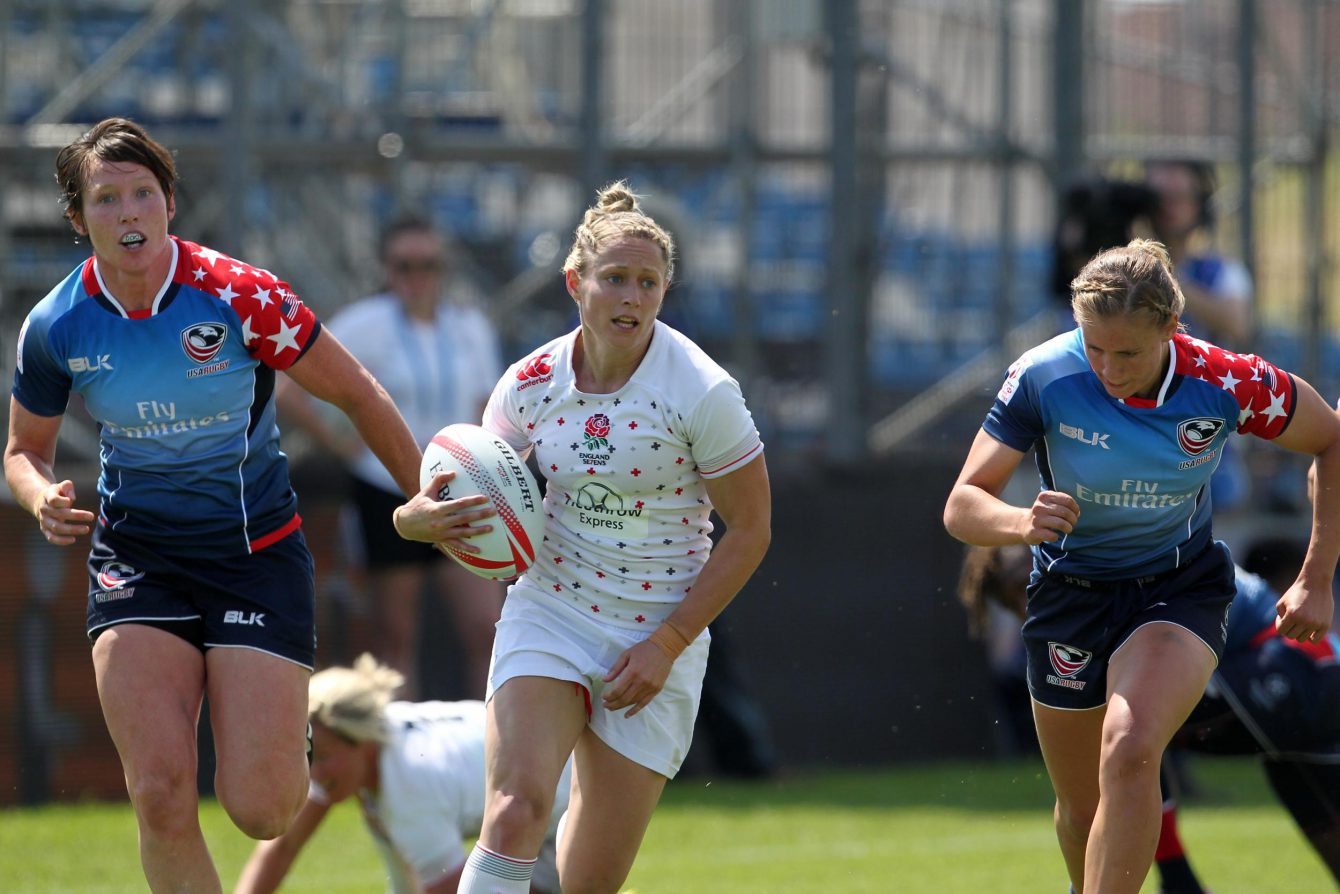 As a result of British nations competing as one in the Olympics and as three entities in World Rugby competition, if one of England, Wales or Scotland qualifies then Great Britain earns a spot in the Olympic Games. England specifically had an impressive showing on the world stage this season, which included winning Canada Sevens in Langford, BC in April 2016. During the 2015-16 Sevens Series, Canada was 1-2 against England but won their final match 31-10 to advance to the Clermont-Ferrand Sevens final. 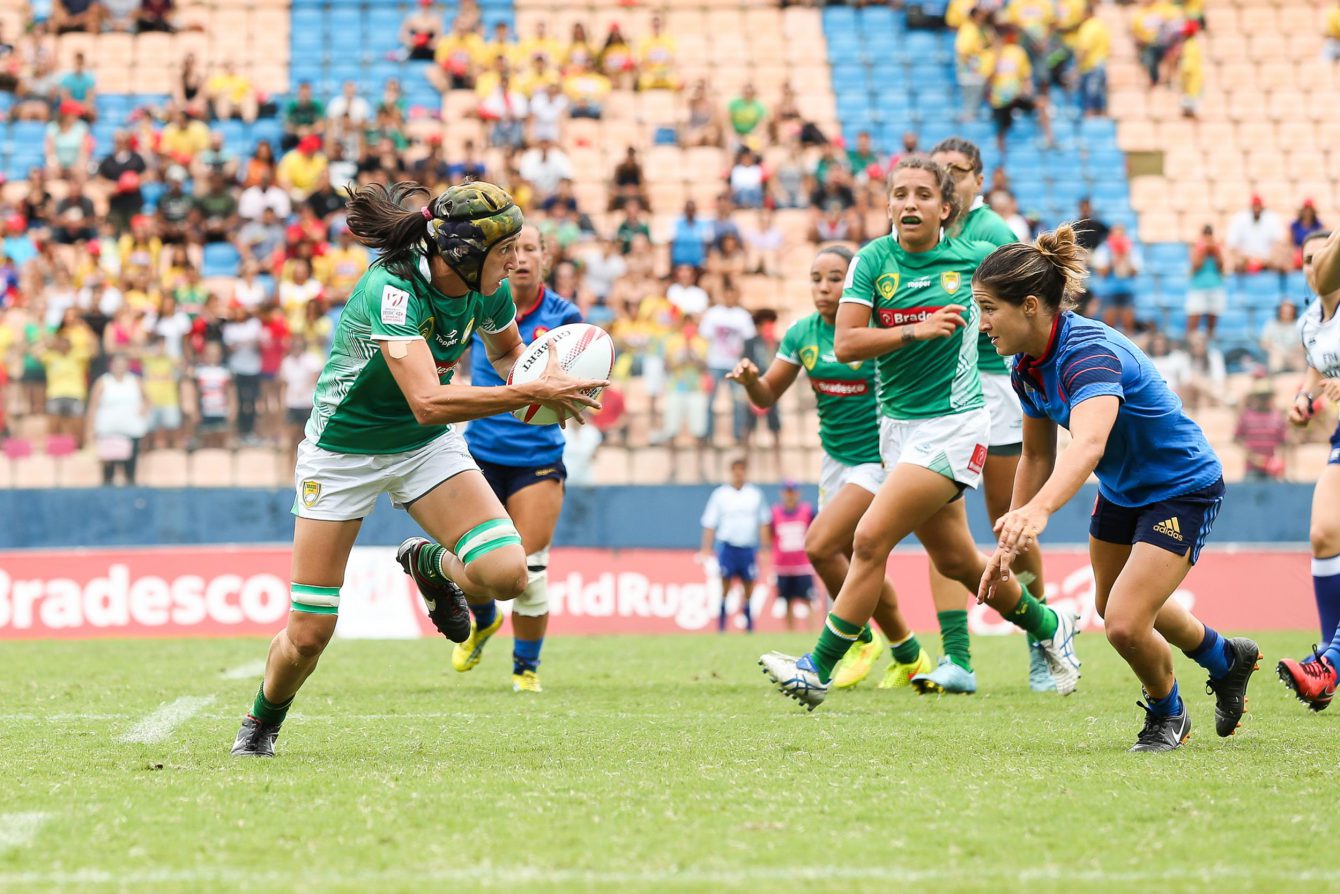 Brazil, not a core team of the World Rugby Sevens Series, made three appearances on the tour in the 2015/2016 series, finishing 10th in Dubai and Langford, and eighth at home in Sao Paulo.

Canada did not face Brazil in any matches in the last season. However, Canada did overcome Brazil 36-0 in the pool stages of play during the Toronto 2015 Pan Am Games, where Canada went on to win Gold with Brazil capturing the Bronze. 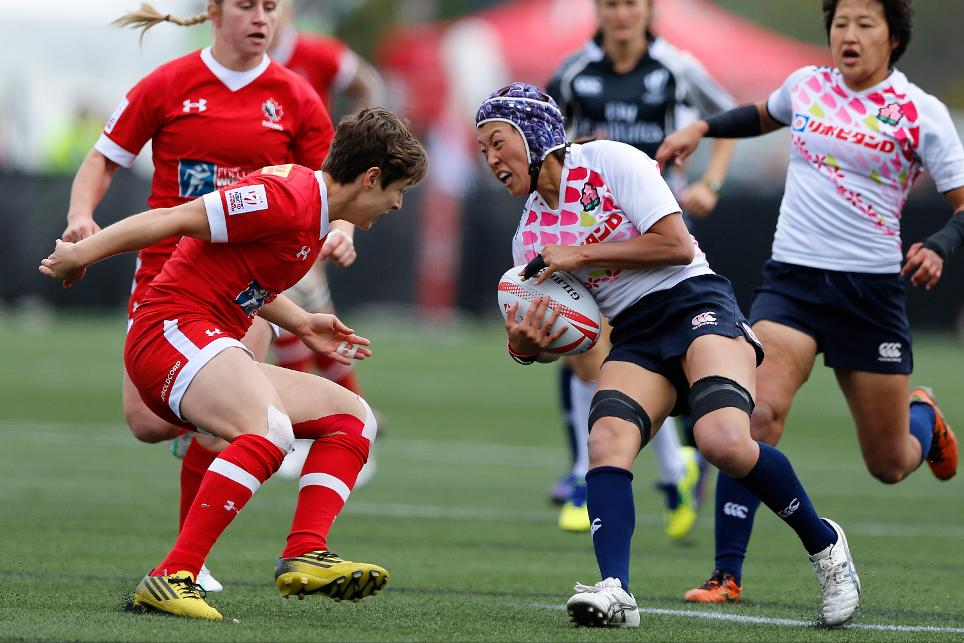 Japan readies faces a tackle in a 38-0 loss to Canada (Photo: Mike Lee via World Rugby).

Japan qualified to become a core team on the World Rugby Sevens Series in 2015 and finished out the tour 11th overall. 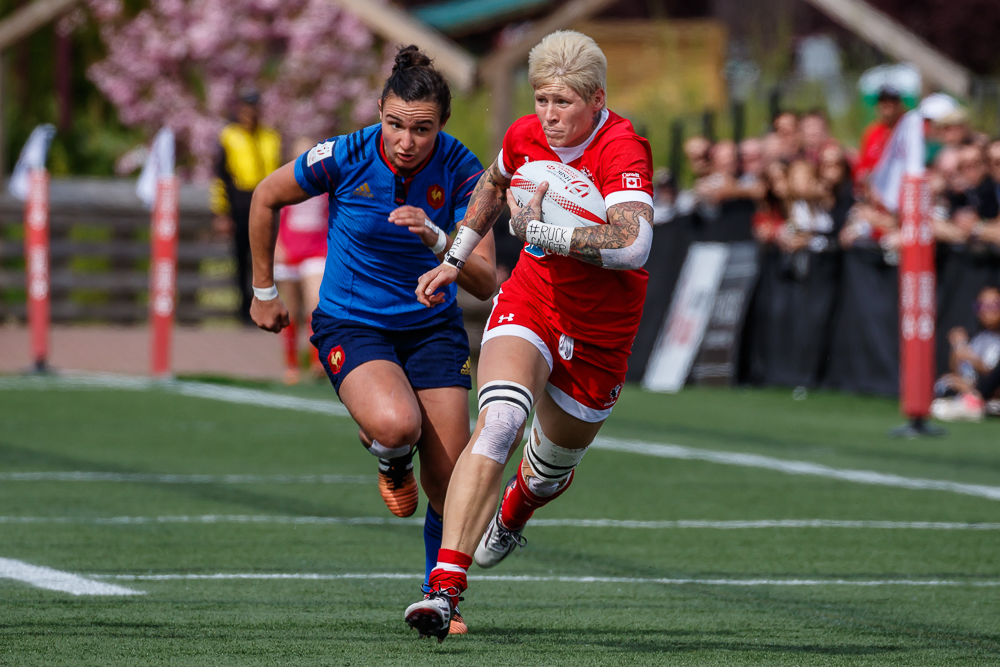 Jen Kish breaks away during Canada’s cup quarterfinal match at Canada Sevens in Langford, BC on April 17 (Photo: Lorne Collicutt).

“We welcome the challenge with having three very physical teams to compete against,” said Canada’s captain Jen Kish. “They all bring something different to the table which allows us to apply our different structures in both defence and attack. We will need to be at our very best during every minute of the games and will not overlook any team no matter their world ranking.”

The Women’s Rugby Sevens event will run from August 6 to 8 at Deodoro Stadium in Deodoro Olympic Park, pictured in the video below: