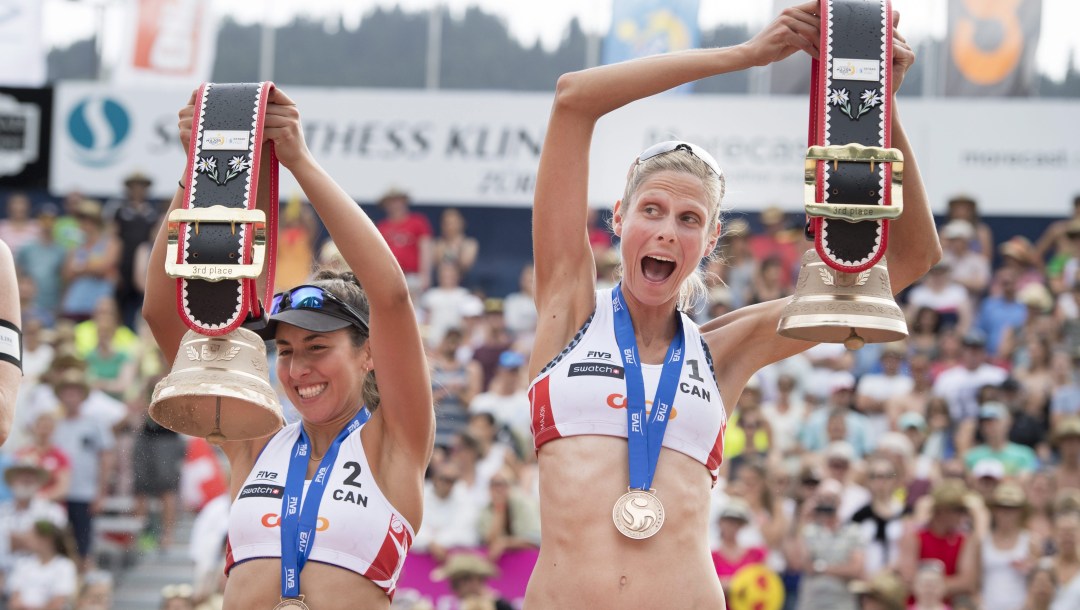 Some Canadian athletes won medals, others made history this past weekend, including a couple of breakthroughs on the international sports stage that had never been seen before.

Here’s what went down.

National volleyball history was made in Curitiba, Brazil on Saturday when the Canadian men’s team came from behind to beat the United States for its first ever FIVB World League medal, taking the bronze at the Americans’ expense. This was Canada’a first year playing in Group 1 after winning Group 2 last year for an overall placement of 13th. The country’s previous best finish was fifth in 2013. The men’s volleyball team captured the hearts of all Canadians last summer when they advanced to the quarterfinals at Rio 2016.

When you're caught opening the champagne before the ceremony is over 😳😂 Back to back medals at the #swatchmajorseries events, bringing home 🥉 from Gstaad. Such an amazing event! As always, we were so sad to leave, but we had some extra hardware and a cowbell to carry on the plane with us! 👯🙌🏻🔔

Sarah Pavan and Melissa Humana-Paredes’ dream first season together continued on Saturday with an FIVB World Tour bronze at the Gstaad Major in Switzerland, where the Canadians beat local Swiss duo of Anouk Vergé-Dépré and Joana Heidrich 2-0 (21-15, 21-12). This follows their tournament victory on Canada Day at the Porec Major in Croatia. They’ve reached the podium in three of five events this season and finished fourth in another.

At the World Rowing Cup III in Lucerne, Switzerland on Sunday, Canada came away with two medals from women’s events, a bronze in the four by the crew of Hillary Janssens, Susanne Grainger, Christine Roper and Nicole Hare as well as a silver in single sculls by Carling Zeeman. This was the first international regatta this season for Team Canada.

Been a long time coming… But we're just getting started. #WeAreTeamCanada #FIBAU19 (📸: @fiba)

Canadian athletes were on the ball this Sunday as the U19 men’s basketball team became the first Canadian team to win gold at the FIBA U19 Basketball World Cup in Cairo, Egypt. They outplayed Italy in the final for a dominant 79-60 win. It is Canada’s first ever gold medal at an international FIBA competition.

The gold medal game was a team effort as four Canadians cracked double figures to lead 14-4 early in the game and 24-10 after the first quarter. Seventeen-year-old R.J. Barrett from Mississauga, Ontario was named MVP after leading the tournament in scoring with 21.6 points per game, including 18 points and 12 rebounds against Italy.

Team Canada’s bigger victory, however, came in Saturday’s semifinal against the United States, who hadn’t lost a U19 game in six years. Canada swept aside the defending champions with a 99-87 win, highlighted by Barrett pouring in a total of 38 points.

Antoine Valois-Fortier‘s road to the 2017 World Judo Championships at the end of August is running smoothly.

After being crowned champion of the Hohhot Grand Prix just last week, the judoka from Quebec City brought home the gold medal from the Asia Open on Sunday in Taipei, Taiwan.

Valois-Fortier dominated the 81kg division, scoring ippons in all three of his bouts. He defeated Tseng Wen of Taipei in the preliminary round and Lim Jooyong of South Korea in the semifinal. In Sunday’s final, he faced off against another local judoka, Chang Wei-Cheng. Valois-Fortier, a 2012 Olympic bronze medallist, reached the podium at the last two world championships. This was just his fourth competition since Rio 2016 after undergoing surgery.

Ottawa was the place to be this past weekend as the host of the 2017 Canadian Track and Field Championships.

Andre De Grasse and Crystal Emmanuel dominated the sprint competitions, both becoming double champions in the 100m and 200m. De Grasse clocked 19.96 seconds to secure the 200m victory, two days after he posted a victory in the 100m with a time of 10.11 seconds. The track star secured his spot on Canada’s world championship team.

World silver medallist Melissa Bishop cruised to her way to her fourth national 800m title. Halfway into her race, she had opened a gap on the field that stretched back a good 10 metres. Bishop’s spot is officially booked for next month’s world championships.

Making their way into the national championship record books were Sage Watson, Alysha Newman, Liz Gleadle and Brittany Crew. Watson ran the 400m hurdles in 54.97 seconds. Crew won the shot put with a distance of 18.38m while Newman won the pole vault with her height of 4.65m. Gleadle took her seventh javelin crown with a distance of 60.62m and then finished fourth at the Muller Anniversary Games in London, England with a toss of 64.47m, her best throw since 2015.

7x 🇨🇦 Champion & a new Meet Record of 60.62m!
Big thanks to family & friends in Ottawa for looking after me and coming out to the track ♥️ pic.twitter.com/Ah1ALTp6mx

Unfortunately for reigning Olympic and world high jump champion Derek Drouin, this weekend was not what he planned. Drouin had to withdraw from the competition due to a nagging Achilles tendon injury. He is confident, however, that he will defend his world title next month.