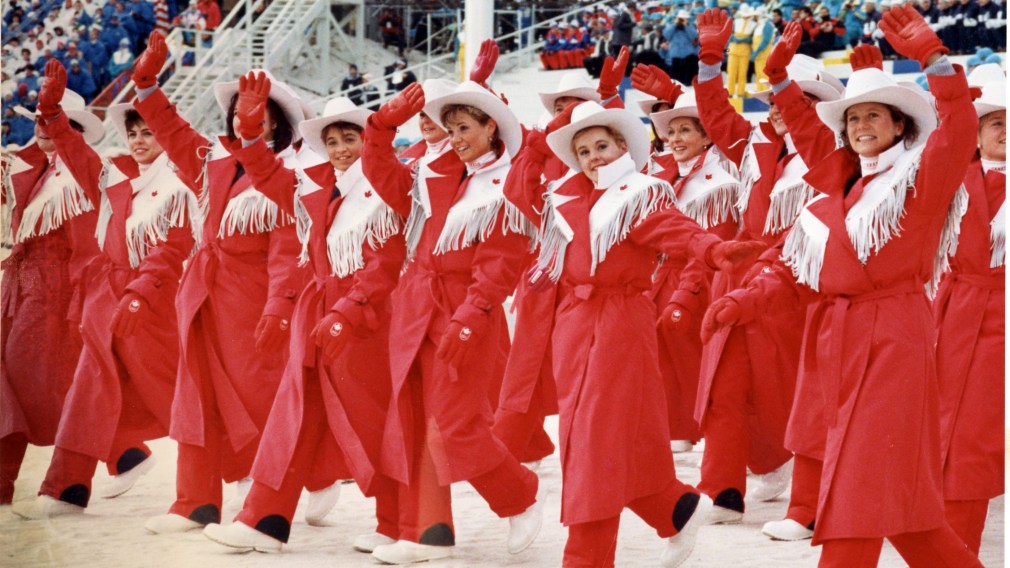 For 16 glorious days in February 1988, Calgary welcomed the world to celebrate the XV Olympic Winter Games.

But the joy stretched across the country, beginning with the torch relay.

In the largest contest of its kind in Canadian history, more than 6.6 million entries were received to be one of the 6520 torch bearers. Those selected were not alone as the Olympic flame went on an 88-day, 18,000km journey through 800 villages, towns and cities. Share the Flame, indeed. Who remembers standing alongside a road holding one of the candle torches with its little red cup?

When the Games got going, more great memories were created.

As Canada’s only reigning world champion, figure skater Brian Orser was given the honour of leading his teammates into McMahon Stadium for the Opening Ceremony. Marching last, Team Canada could not have been better outfitted for Calgary than in their red coats with white fringe while sporting those iconic white Stetsons.

Then there was the incredible image of 12-year-old Robyn Perry running up a steep set of stairs and stretching as far as she could to touch the Olympic flame to the cauldron, lighting it up. 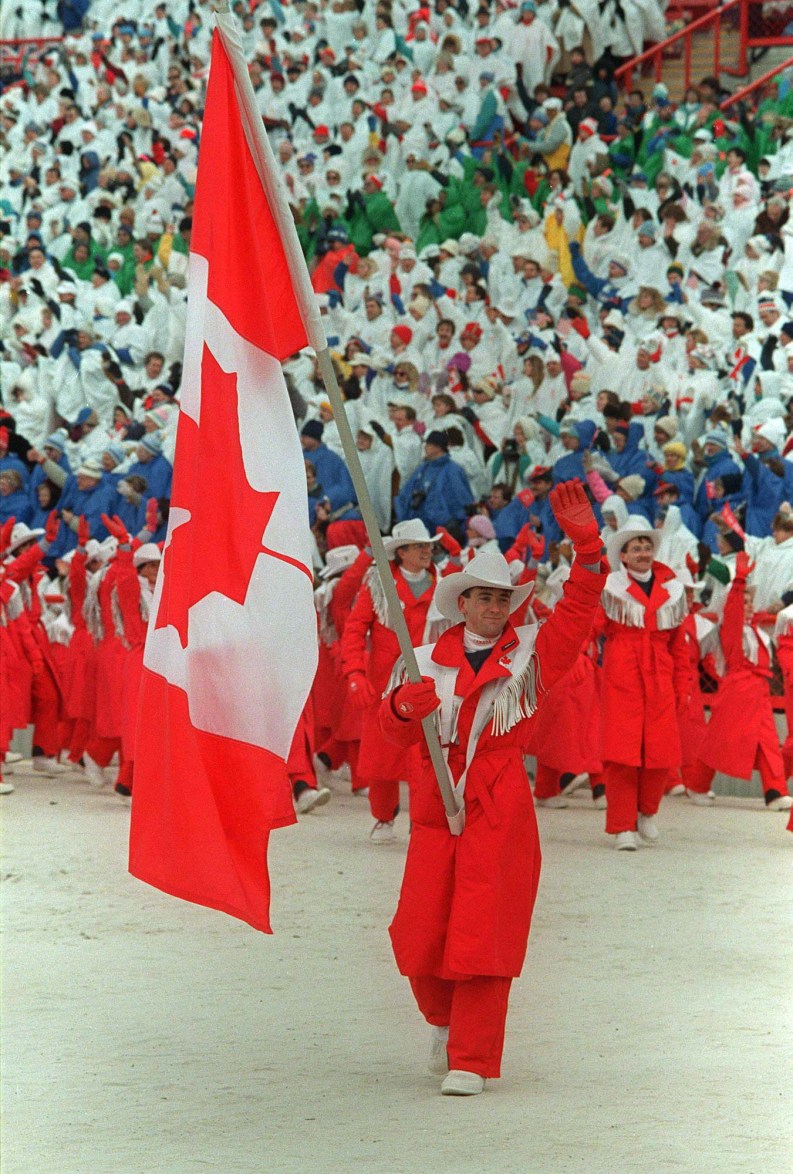 World figure skating champion Brian Orser carries the Canadian flag as he leads the Canadian Olympic team into McMahon Stadium in Calgary during the opening ceremony of the XV Olympic Winter Games on February 13, 1988. THE CANADIAN PRESS/Paul Chiasson 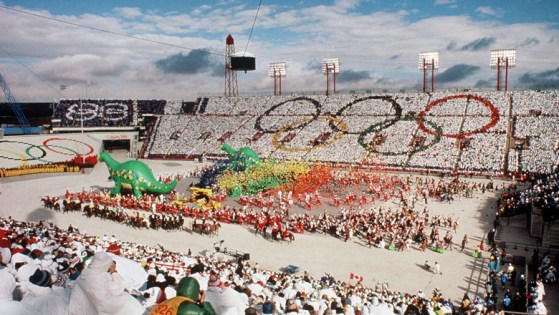 The opening ceremony of the Calgary 1988 Olympic Winter Games. 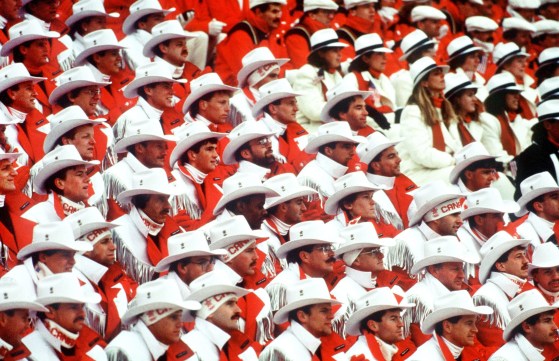 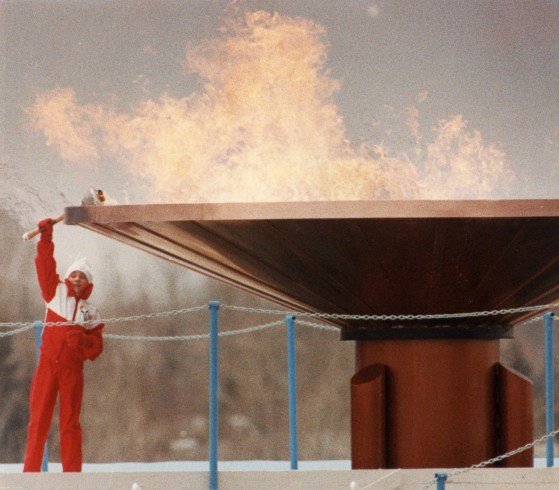 The Olympic flame burns bright over Calgary’s McMahon Stadium Saturday, Feb. 13, 1988, after 12-year-old Robyn Perry, a novice figure skater from Calgary, held the torch aloft to light the massive cauldron and light the flame which will burn for16 days. THE CANADIAN PRESS/Philip Walker

Elizabeth Manley became Canada’s Sweetheart by breaking up the Battle of the Carmens with a career best skate at the Saddledome. That ice was also the site of two other Canadian medals.

The Battle of the Brians was one of the most hyped showdowns in Olympic history and Orser vs Boitano delivered the drama. Before Virtue and Moir, there was Tracy Wilson and Rob McCall who had a historic podium breakthrough in ice dance.

Completing the country’s medal count was Karen Percy who had the slopes of Nakiska as her stage as she sped to bronze in both the downhill and super-G. 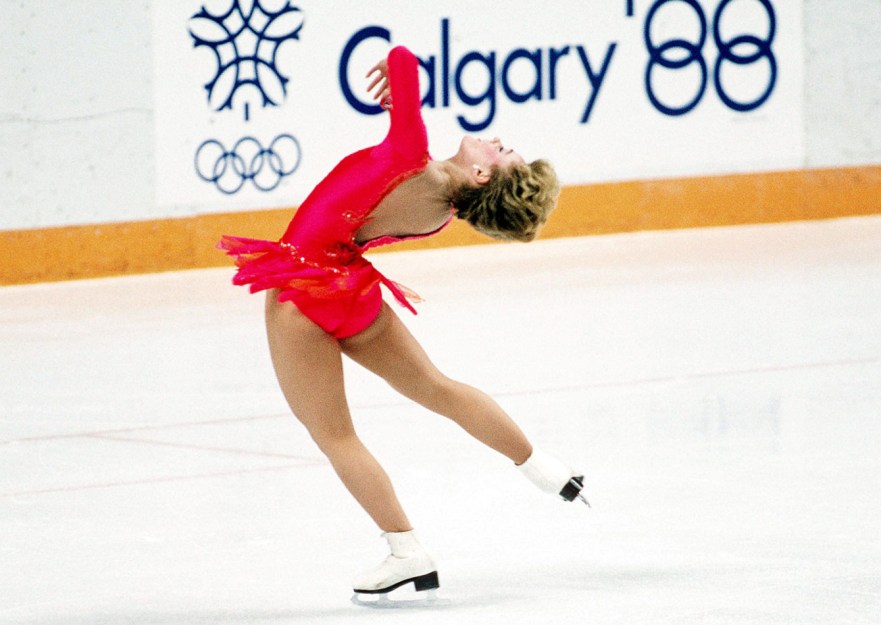 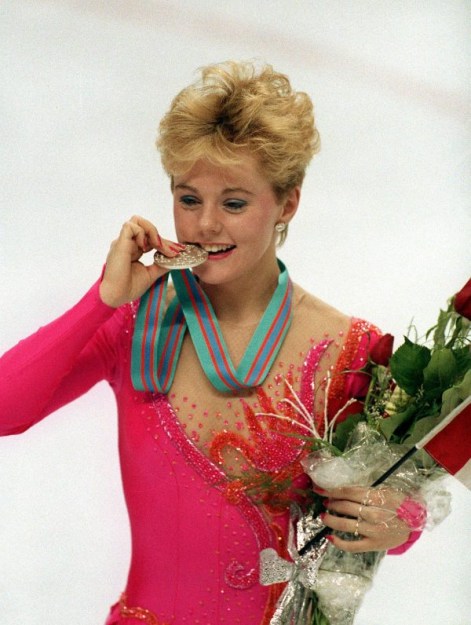 Elizabeth Manley bites the silver medal she won at Calgary 1988. 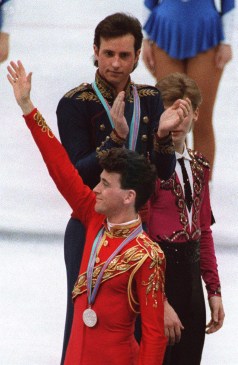 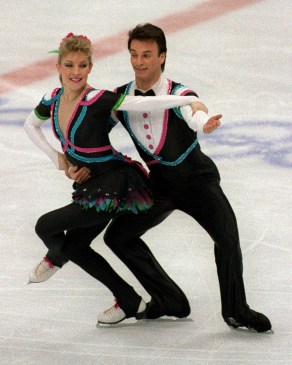 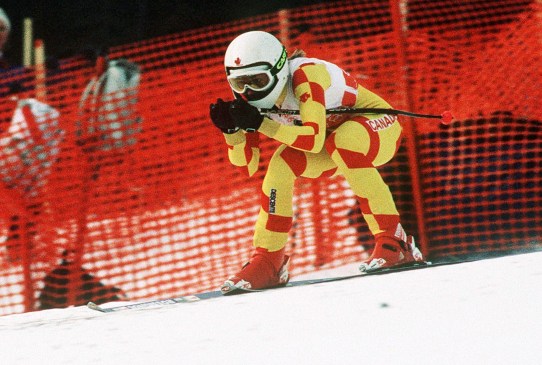 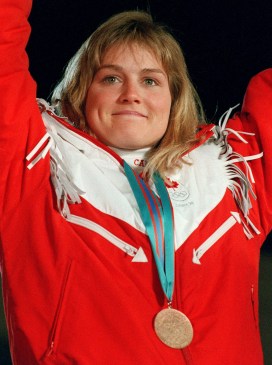 Of course, the Olympic Games aren’t just about the host country or city.

Canadians cheered on and made legends of some of the mightiest underdogs in Olympic history. The Jamaican bobsleigh team was a novelty then, but a constant presence on the international scene now. Eddie the Eagle regularly returns to show his love for the city where his Olympic dreams became a reality just by soaring off the ski jump.

Both of those stories were so good, movies were literally made about them. 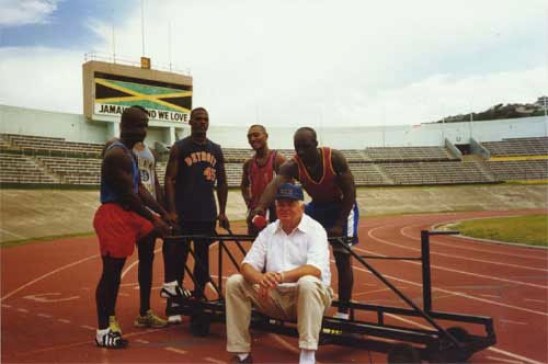 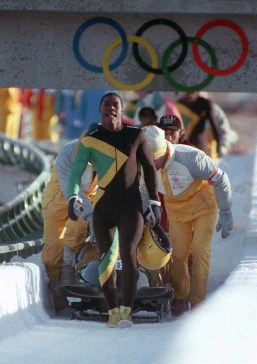 The Jamaican bobsleigh team leaves the track after their final run at Calgary 1988. 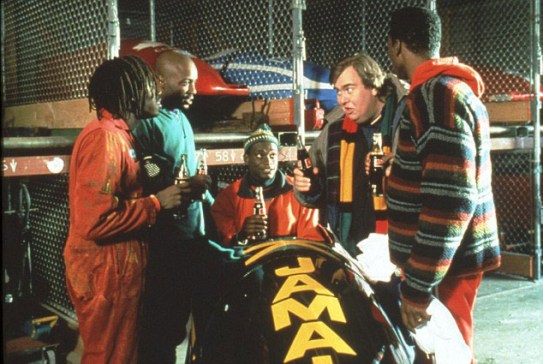 The cast of Cool Runnings, the feature film about the 1988 Jamaican Olympic bobsleigh team. 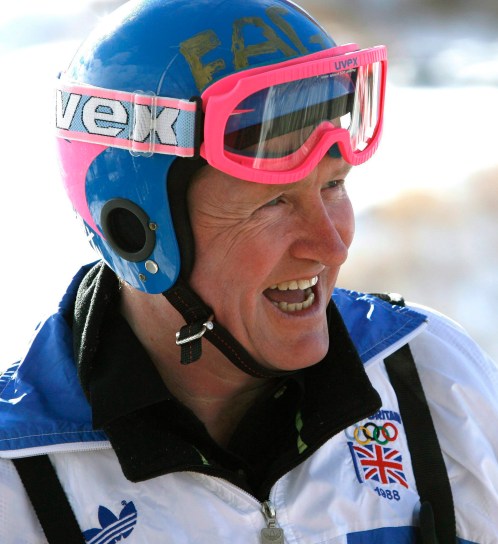 Former Olympic ski jumper Eddie “the Eagle” Edwards, from Britain, laughs after a ride from the 90 metre ski jump tower to commemorate the 20th anniversary start of the 1988 Olympics in Calgary, Alberta on Feb. 13, 2007. (THE CANADIAN PRESS/Larry MacDougal) 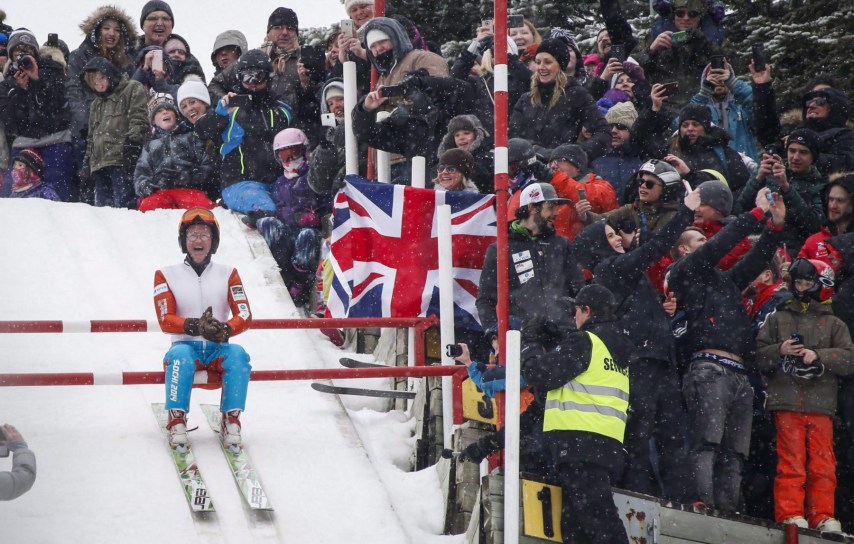 There was also the larger-than-life personality of Alberto Tomba “La Bomba”, the flashy and flamboyant Italian alpine skier who won two gold medals. One of the aforementioned Carmens, Katarina Witt of East Germany, played the role to perfection to become the first woman to win back-to-back figure skating titles.

The Games left a remarkable legacy for Canadian athletes. The sliding centre at Canada Olympic Park became the training ground for Olympic champions such as Pierre Lueders, Kaillie Humphries, and Jon Montgomery. The Canmore Nordic Centre is where Beckie Scott and Chandra Crawford honed their craft.

Speed skating was held indoors for the first time in Olympic history. After having been established as the fastest rink in the world, the Olympic Oval saw record after record broken during the Games before it became a vital facility for Canada’s future stars of the sport, such as Cindy Klassen, Clara Hughes, and Catriona Le May Doan. 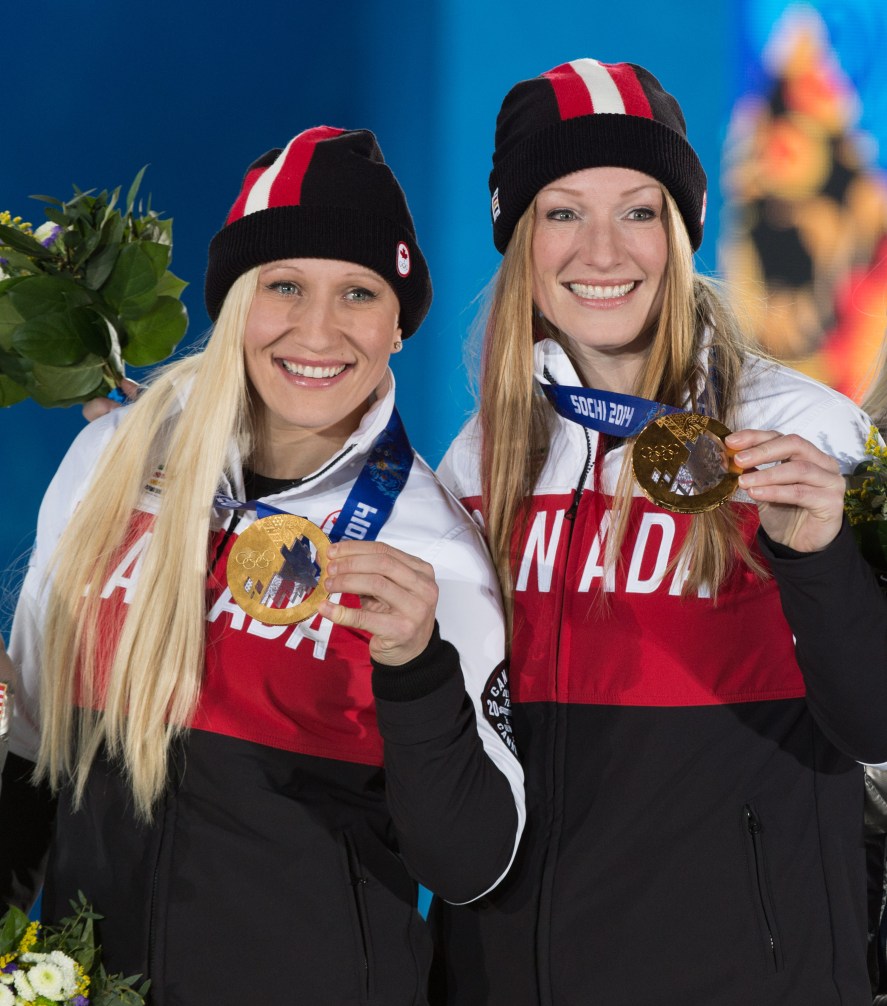 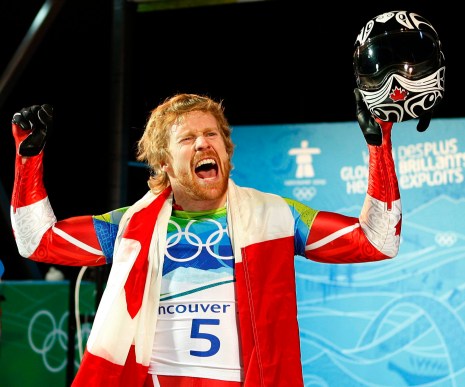 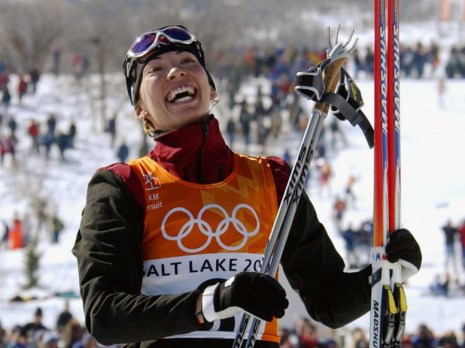 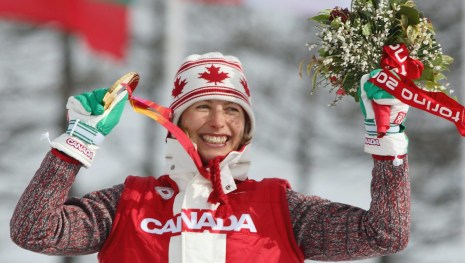 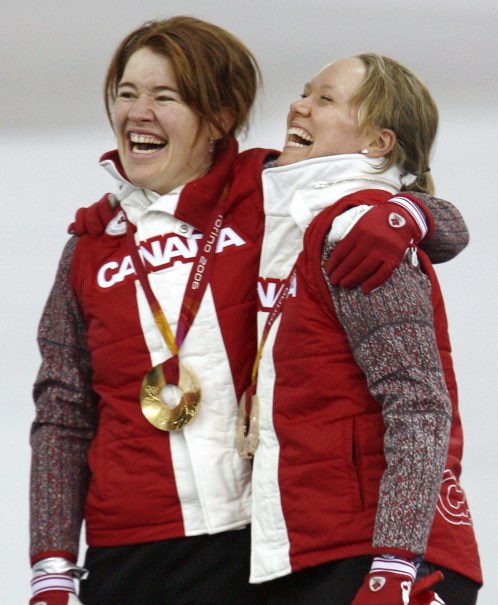 Clara Hughes and Cindy Klassen sing O Canada together after winning gold and bronze in the 5000m at Turin 2006. 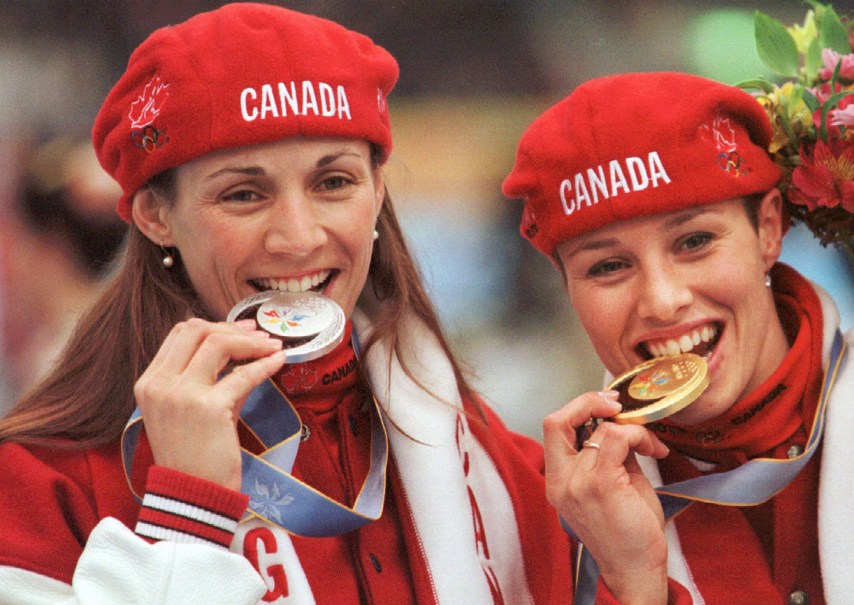 People were undoubtedly passionate about Calgary 1988. The community spirit was on full display with more than 24,000 volunteer applications processed and more than 9500 of those people committing to work 120 hours at the Games.

There were no worries about empty stands at the venues. More than 53,000 orders were post-marked for the opening day of ticket sales. The demand was so great that capacity at several venues was increased, making more tickets available than at any previous Olympic Winter Games.

The Olympic Plaza where nightly medal presentations took place was designed for 10,000 people but the average attendance was 35,000 and peaked at 70,000 on the second last day. Yet, the good humour of the crowd meant there were very few problems.

Thirty years ago, one of the biggest earworms was David Foster’s theme song for the Games, “Can’t You Feel It?” Do we have you humming it yet?

Also beloved were the mascots. Hidy and Howdy were a popular pair of polar bears in their colourful western wear. They conveyed their message of welcome through hugs at their 50,000 public appearances. Were you lucky enough to receive one?

If you’re looking to immerse yourself in the spirit of Calgary 1988, the official film is available on YouTube.

Calgary 1988: Let the Olympic Games nostalgia begin
Getting vertical: The highest jumps in sport
Shuttlecock and balls: The fastest moving objects in sport
Parrot wins gold at FIS big air World Cup in Austria
Korea 101: Korean Customs and Traditions
What are the differences between baseball and softball?