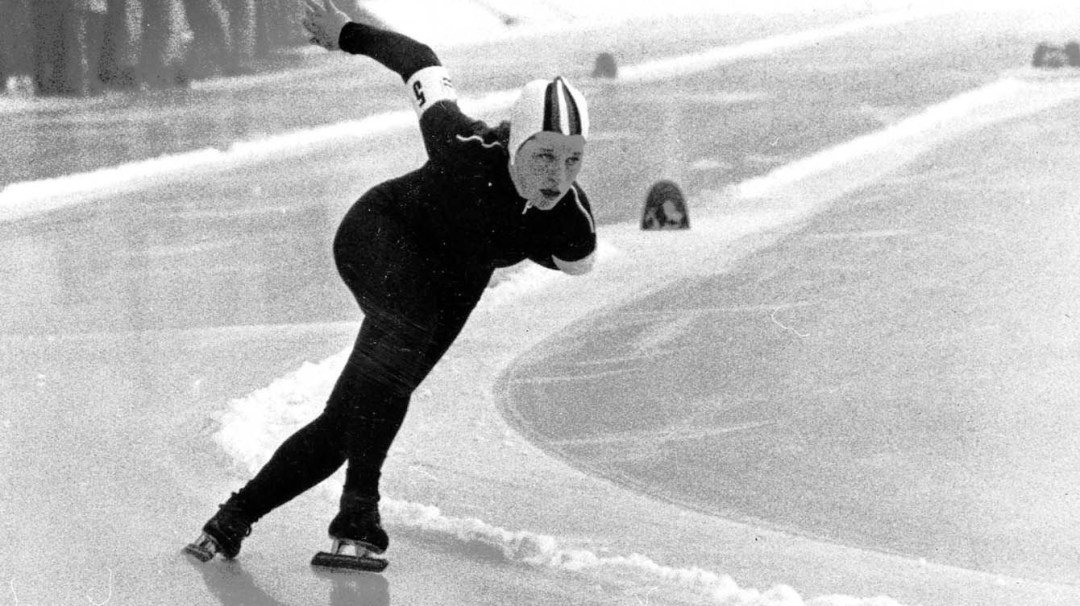 Long track speed skater Cathy Priestner was just 15 years old when she competed at her first Olympic Winter Games in Sapporo 1972, racing in the 500m and 1000m with modest results. At Innsbruck 1976, 19-year-old Priestner opened up her Olympic campaign by winning a silver medal in the 500m to become the first female Canadian speed skating medalist. The following day, she finished sixth in the 1000m and then was chosen to carry Canada’s flag in the Closing Ceremony.

Priestner’s career began in 1968 at the age of 11 after her family moved from Hamilton, Ontario to Winnipeg, Manitoba. She joined the River Heights Speed Skating Club and ended up winning nationals for her age class that first year. At 13, she made the national team and competed at the sprint World Championships in Milwaukee, and at 14 she won a gold and a silver medal at the 1971 Canada Games. Priestner went on to become a five-time Canadian champion and 1975 World Championships 500m bronze medalist. Over her career, she set four junior and five senior national records.

Despite still improving after her Olympic medal in 1976, Priestner decided not to continue for a variety of reasons including the financial burden on her family. She retired at 19 and briefly enrolled in Mount Royal College in Calgary, married at 21, moved to Illinois where she volunteer coached a young speed skater by the name of Bonnie Blair, who was thinking of quitting the sport at the time. She studied sport management at Montana State University, facility management at the University of Pittsburgh and then moved to Calgary as single mom to become the General Manager at the Calgary 1988 Olympic Oval from 1986-96.

Priestner carried the Olympic Flame (with alpine skier Ken Read) into the stadium for the Opening Ceremony at Calgary 1988, was an analyst for Canadian broadcasters for Albertville 1992 and Lillehammer 1994, then began her career as a pillar of the Canadian and international sporting landscape. She had executive positions at Salt Lake 2002, Torino 2006 and Vancouver 2010. In 2004, Priestner and husband Todd Allinger, a biomechanist and sports scientist, authored the “Own the Podium 2010” report – Canada’s Olympic medal program and strategy. For Sochi 2014, they wrote a similar report for the Russian Olympic Committee to improve on their medal performance for their home games. In 2017, Priestner returned to her roots and was elected as president of Speed Skating Canada. She was inducted into the Alberta Sports Hall of Fame in 1976 and Canadian Olympic Hall of Fame in 1994. In 2002 and 2010, Priestner was a recipient of the Olympic Order in Silver.