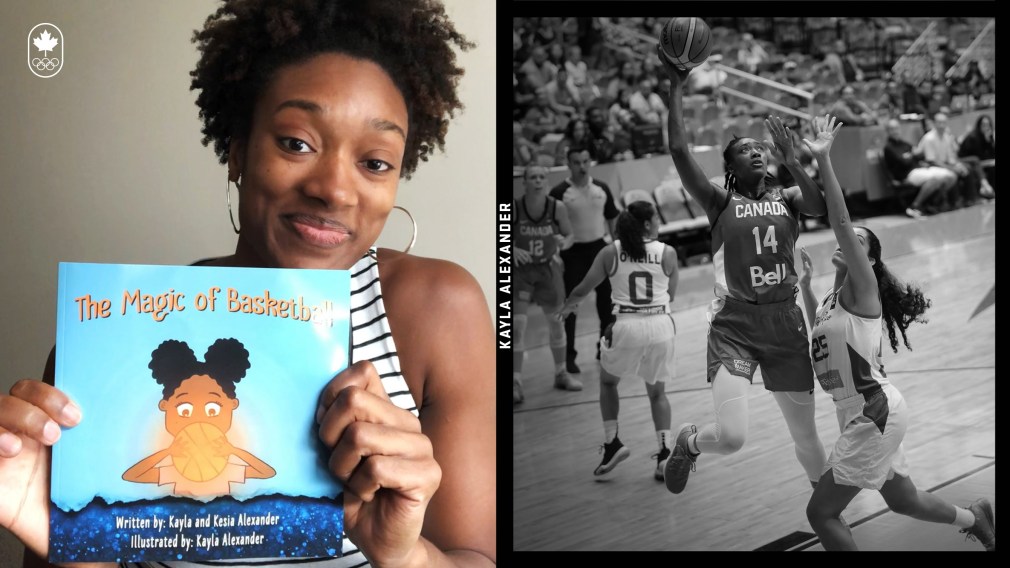 Kayla Alexander’s career on and off the basketball court has been a real page turner.

In February, she helped Team Canada qualify for Tokyo 2020 after coming back from two separate knee injuries. She’s been playing in the WNBA since 2013, spending the 2020 season in the bubble with the Minnesota Lynx.

Amidst all that, she added children’s book author to her impressive resume.

The Magic of Basketball – written, illustrated, and self-published by Alexander – hit online bookshelves in August 2019. 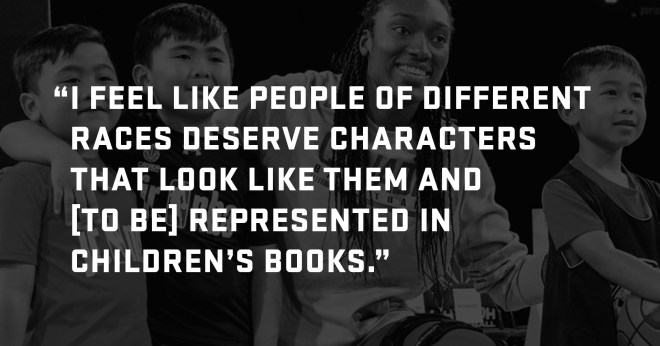 Drawing from her own life experiences, the book takes readers on the journey of a young athlete named Kayla – from a 12-year-old basketball beginner to a college player and all the way to a professional career. With characters inspired by her teammates and friends, it’s a story that truly shows the magical power of sport.

“For a long time now, I knew I wanted to create something that encompassed all of my passions,” Alexander told Olympic.ca. “I love to draw and illustrate. I love working with kids. I love the sport of basketball. I think there’s so much power in sports and my journey – there’s a story there. I wanted to use it to inspire and encourage young kids to go after their dreams and to try something new with sports.”

The book was a lot like making the perfect shot; it came with trial and error and a lot of patience.

It started simply as journaling, as Alexander reflected on everything basketball has taught her, but it took some time for her to get past talking about writing the book and actually write it. It started with lengthy paragraphs, but she knew she needed something simpler that kids could read on her own. 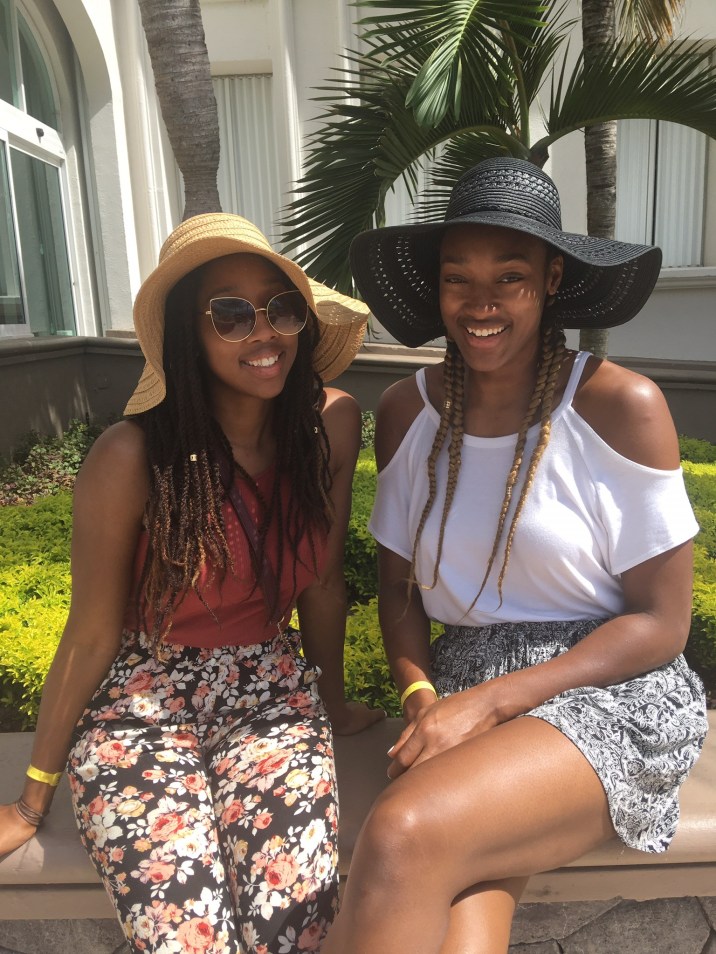 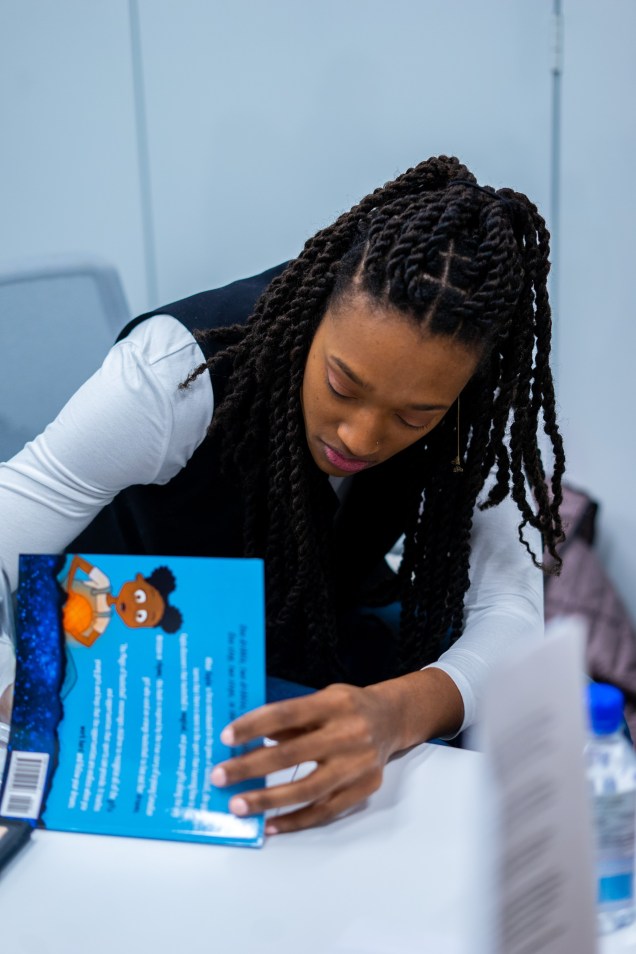 Alexander says it was her sister Kesia (credited as co-author) who pushed her to make the whole book rhyme. And it was the sisterly tough love that really encapsulated the story she wanted to tell.

“It end[ed] up turning into the book we have today and I’m very proud of it and very thankful for everybody’s feedback and willingness to help me,” Alexander said. “Especially my sister and her brutal honesty; it’s much better than it was when I first started.”

The storyline may have been a slam dunk but creating and drawing each character was a whole new game, which was helped by finding the right technology for her art.

“I don’t have any formal training when it comes to art, so I was having a hard time keeping the character consistent,” Alexander explained of her early efforts to freehand which didn’t result in the professional look she wanted. “Before I transferred over to the iPad, I was doing my illustrations with notebook paper and sketching paper with a pencil and markers and illustrative pens.” 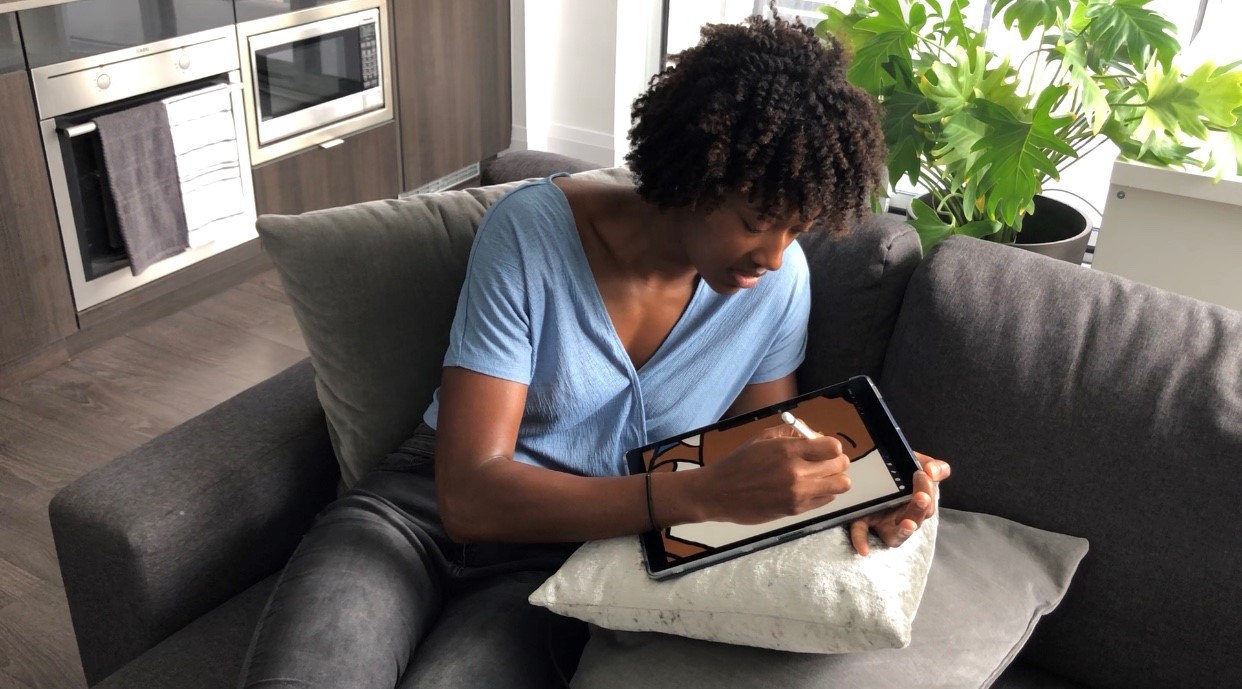 Every spare second Alexander had off the court you could find her writing or sketching out her characters and watching her vision coming to life.

“Things develop slowly when it comes to developing a new skill like in basketball,” Alexander said. “It was a different mental challenge because I needed to make sure I had time to write the book, trying to find words that rhyme and making sentences about what I was trying to say. And then actually trying to figure out how to publish a book.” 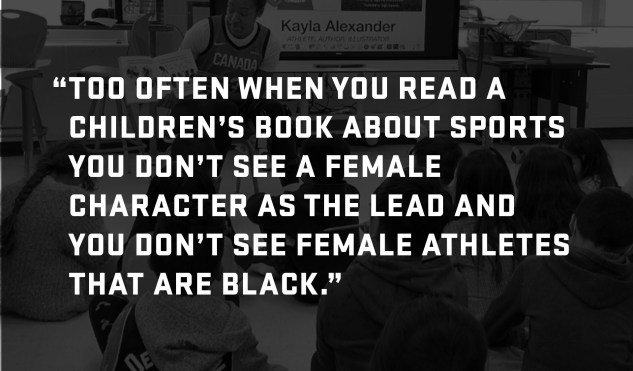 It wasn’t hard to find the motivation to achieve her dream.

Reflecting on the lack of representation of BIPOC characters, Alexander says she and her siblings never related to book characters as kids because they never looked like them.

“I feel like people of different races deserve characters that look like them and [to be] represented in children’s books,” Alexander explains. “I wanted to have a female character in sports. Too often when you read a children’s book about sports you don’t see a female character as the lead and you don’t see female athletes that are Black. So, I wanted to create a story that had that, that could show young girls, especially young Black girls, that when they look at that character, [they] see parts of themselves as well.” 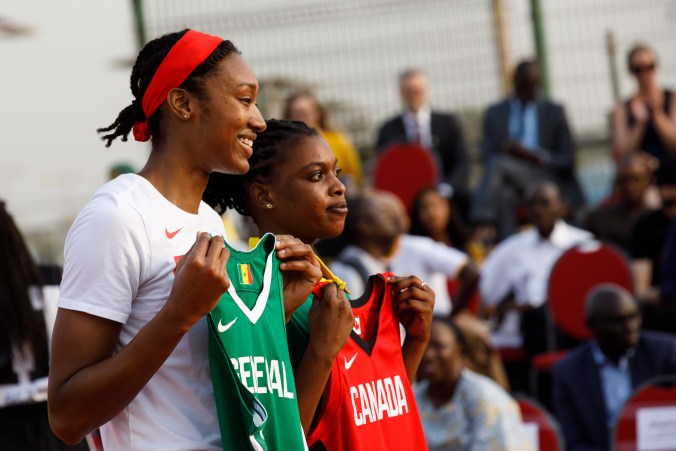 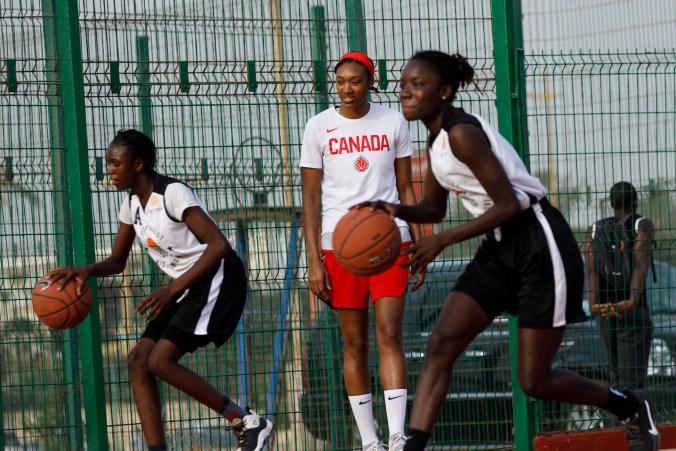 As basketball took her all over the world, Alexander’s book naturally followed. From finding time to squeeze in some illustrations while on the sidelines in Australia, to bringing copies of her book to give away Senegal – Alexander’s story is shared globally.

“At times it was frustrating, but we learned a lot and am very thankful for the entire [publication] process. It showed us how hard it is at times to create something like a book, but also it made us appreciative because we got to create something new that we had never done before,” Alexander said.

Finding inspiration and reason to write a book started when she was in grade school. Alexander, who studied education in college because she wanted to be a teacher, says the value of literacy is something so precious. From scrolling through your Instagram comments, to reading a sign and a billboard, she says it’s a skill that shouldn’t be taken for granted.

“I see the importance of having a good education – kids need that – and I want to find a way to add to that, and to encourage them through adversity and positivity. Things are possible if you put in the work and that dreams can come true.” 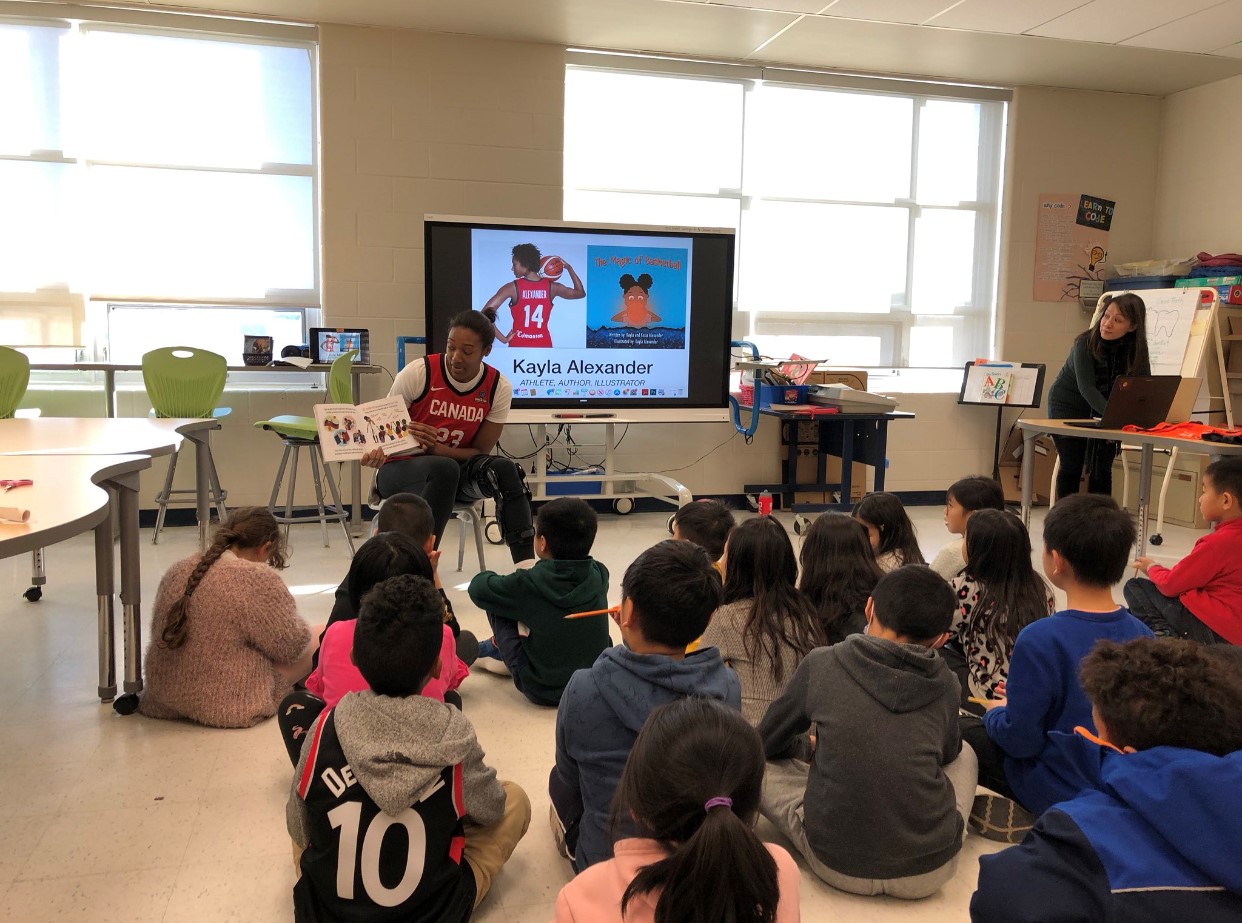 The entire experience – from writing and re-writing, to figuring out how to illustrate on her iPad and get what was in her head to paper, to finding a publisher and understanding the process – was a new challenge. But watching kids read and absorb her story is a huge win in her books.

“I got to do a lot of school visits which I really enjoyed and engaging with the kids with the book. And it was really just surreal to see how they took the book, the lessons that they gained from it, their thoughts on it, and even seeing what they took from the book and process it.”

Alexander’s story doesn’t stop here. She hopes to continue to share stories that celebrate female and Black characters so kids can connect with the books they’re reading.

“I really enjoyed that whole process and I love hearing the feedback from kids and their parents and teachers after they read the book. So definitely want to continue to work with the youth for sure.”

You can order your copy of The Magic of Basketball on her website www.kaylaalexander.net 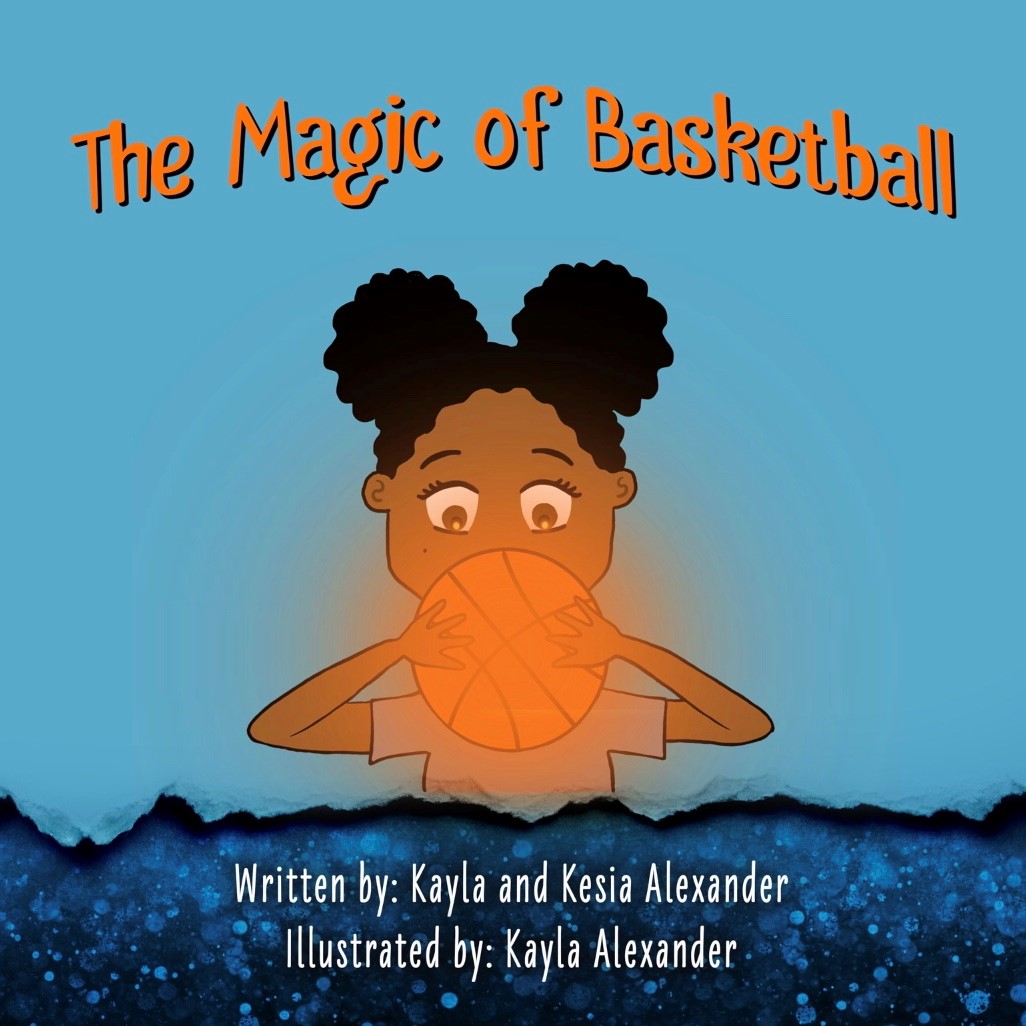 Kayla Alexander and The Magic of Basketball
Figure Skating: Keegan Messing wins bronze at Skate America
What is the difference between racquetball and squash?
Shuttlecock and balls: The fastest moving objects in sport
Adventure, culture and food: 9 things Peru is famous for
Winter is Coming: Ice sport season in 2020-21 will be like no other before