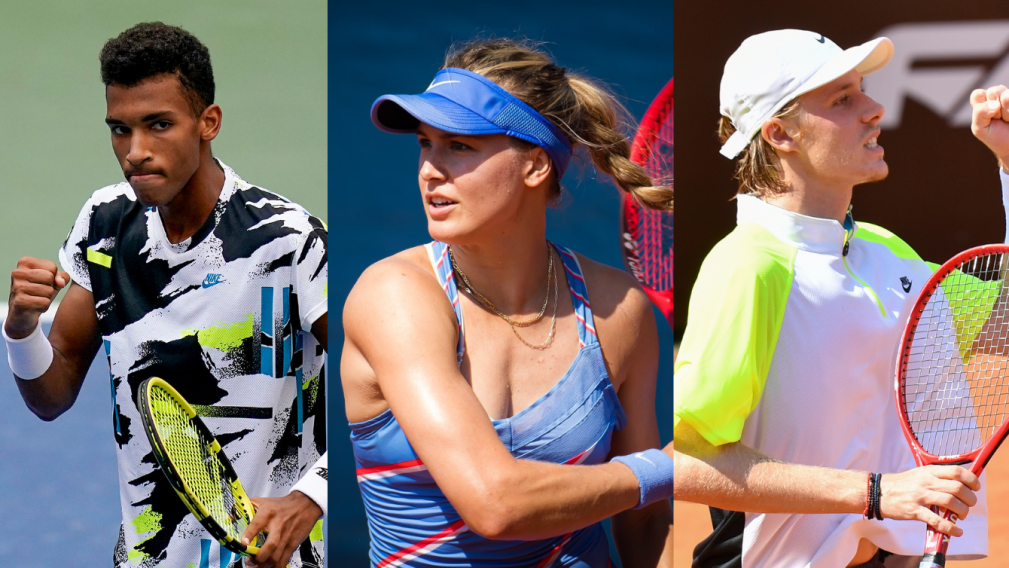 Under the shade of Parisian trees coloured by the crisp wind of autumn, Canada’s best tennis players will take part in Roland-Garros, the second Grand Slam held during the COVID-19 pandemic.

Let’s take a look at what awaits them at the Porte d’Auteuil, where the French Open will kick off starting September 27.

Denis Shapovalov is without a doubt on a hot streak. He stunned everyone at the US Open by becoming the first Canadian in history to reach the quarterfinal at Flushing Meadows, but in the end, was defeated by Spaniard Pablo Carreno Busta in a heart-stopping match. His strong performance landed him a career-high ATP ranking of ten. He is the second Canadian after Milos Raonic to reach the top ten.

READ: The many firsts for Canadian tennis at the 2020 US Open

Armed with renewed confidence since his return to play in September, Shapo will face yet another, even more difficult, challenge in Paris: this time men’s tennis’ big three will be in attendance, after Rafael Nadal and Roger Federer pulled out of New York and Novak Djokovic was disqualified before getting to take on the Canadian.

After seeing mixed results at the US Open, will Montreal’s Félix Auger ride the momentum at Roland-Garros, on his favourite playing surface? This will be his first career appearance on the main stage in Paris.

In New York, Félix was one of the three Canadians to reach the fourth round, another first for Canadian tennis. Not bad for a player who had yet to win a Grand Slam match before this year’s US Open! He was taken down by the third seed and eventual champion, Austria’s Dominic Thiem. Last week, he was won just one match at the Italian Open, folding in front of Serbian Filip Krajinovic. 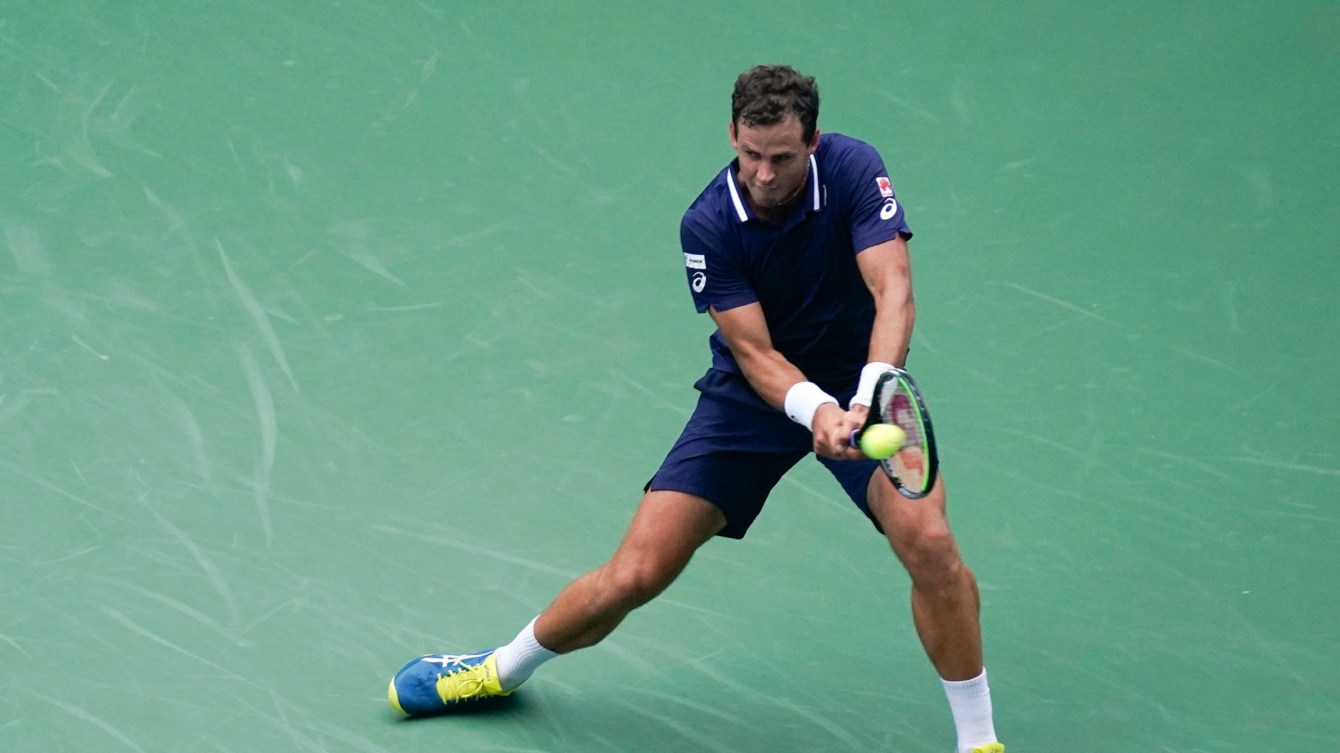 Vasek Pospisil, of Canada, returns a shot to Milos Raonic, of Canada, during the second round of the US Open tennis championships, Thursday, Sept. 3, 2020, in New York. (AP Photo/Seth Wenig)

Vasek Pospisil has risen among the top 100 players after an impressive performance at the US Open, allowing him to shoot up 21 spots in the world rankings. He’s also among the three Canadians to have reached the fourth round at New York, a feat he managed to accomplish by surprising compatriot Milos Raonic in the second round.

This will be Pospisil’s seventh career French Open appearance. He’ll be gunning to make it past the first round for the first time.

Steven Diez will play his first career match in the main draw of a Grand Slam tournament. He managed to make his way to the main draw for the very first time thanks to his three qualifiers wins. He defeated Belarusian Ilya Ivashka, the 26th qualifying seed, along with American Christopher Eubanks and Frenchman Enzo Couacaud to secure his main draw spot.

Montreal’s Leylah Annie Fernandez is a rising star in Canadian tennis, and she owes this boost to her first main stage win at a Grand Slam, at the US Open. Sofia Kenin got the best of her in the second round.

Fernandez will be taking part in Roland-Garros for the first time, having never even played the qualifying round at Paris. At Rome, last weekend, her journey ended in the first round. She disputed a number of matches on clay in 2019, but never in a major tournament (outside of the ITF circuit).

Genie Bouchard booked her ticket to the French Open after taking many of us by surprise when she reached the final at the Istanbul Open, her first since 2016. Even though the match ended in defeat, Genie climbed over 100 spots when the updated WTA rankings were released the following day.

The first round of Men’s Doubles will feature a Canadian showdown. Canada’s Denis Shapovalov (Doubles no. 44) will be partnered with India’s Rohan Bopanna (no.37).  Together they will face, Shapovalov’s fellow Canadian and teammate, Vasek Pospisil (Doubles no.206), and Jack Sock (no. 131) of the United States.

Bonjour ☀️ 11 days later and I’m thinking jet-lag is finally a thing of the past! Also wondering how we tennis players do this at least 10 times a year for our entire careers 🤪 #ivegonesoft

Canada’s Gabriela Dabrowski is partnered with Jeļena Ostapenko of Latvia (no. 19). Together, they will face Zarina Diyas of Kazakhstan (no.472) and Australia’s Arina Rodionova (no.68).

Dabrowski and Ostapenko have been partners for their last few events and based on their ranking, they are projected to go far. Previously, at the Internationaux de Strasbourg, the duo made it to the semi-finals.

Canadian Sharon Fichman will be partnered with Ukraine’s Kateryna Bondarenko. In the first round, they will face Belgian’s Kirsten Flipkens and Anastasia Pavlyuchenkova of Russia. Last week, Fichman and Bondarenko played at the Internationaux de Strasbourg and made it to the quarter-finals.

Alongside Women’s Single’s, Fernandez will be taking part in the Women’s Doubles event with Diane Parry of France (no. 277). In the first round, they will face Jil Teichmann of Switzerland (no. 242) and Serbia’s Nina Stojanović (no. 93). Since this is her first time at Roland-Garros, all eyes will be on Fernandez on both the Singles and Doubles court.

The 2020 tournament will obviously not be like the ones before. The tournament’s organizers will impose strict measures on all participants, staff and attendees to ensure the security of everyone present.

You can consult the full list of measures here, but here are the highlights:
• The number of spectators and their movements will be severely restricted to ensure physical distancing
• All individuals present must wear a mask at all time
• A policy regarding COVID testing will be applied depending on accreditation, including volunteers, player entourages, and staff
• The competition grounds are set up to facilitate control of the flow of attendance more easily than at other sporting facilities.