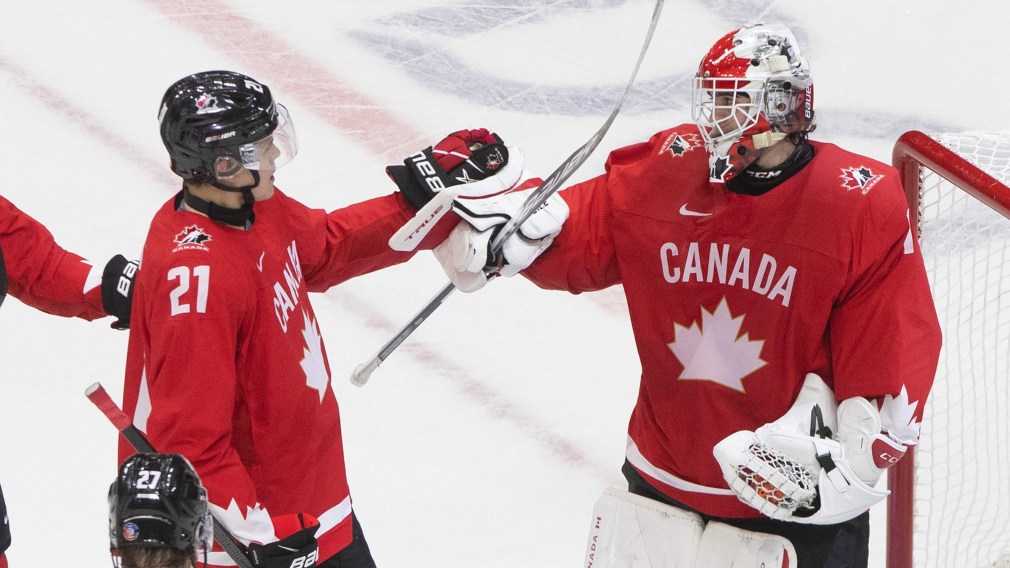 Team Canada is heading to the semifinals at the World Juniors after a 3-0 victory over the Czech Republic Saturday evening in Edmonton, Alberta.

With two wins away from gold, Canada is the only team undefeated in the tournament.

Canada had many close opportunities early in the first, but the Czechs got lucky on many occasions.

A breakaway led to Canada’s first goal of the game. Dylan Cozens scooped up the puck and was off to the races, squeaking the puck past Czech Republic goaltender, Nick Malik (8:22). This was only the third shot of the game for Canada.

At 9:35, the Czech Republic sent Canada on their first power play of the game. After two minutes of power play pressure, Bowen Byram also snuck one past Czech Republic goaltender (11:39) to increase the Canadian lead to 2-0. Cozens screen made it difficult for Malik to see the incoming shot just four seconds after the power play ended.

Canada’s powerful forecheck left the Czech Republic having a defensive nightmare deep in their end.

A scoreless second period left Canada and the Czechs with many turnovers and icing calls.

Unable to get fresh feet on the ice, the Czechs showed exhaustion at the five minute mark and forced an icing followed by a timeout to catch their breath.

Many sharp saves by Devon Levi, kept the Canadian advantage heading into the second intermission. Shots were even at 18-18 at the end of period two.

The final frame got off to a slow start. Canada and the Czech Republic continued back and forth play, with few scoring opportunities. Levi froze many opportunities for the Czechs, finding the puck and finishing the play.

With five minutes and 34 seconds remaining in play, the Czech Republic pulled their goalie to apply pressure deep in the Canadian zone. Canada stretched the score to 3-0 with an empty net goal with only two minutes and 49 seconds to go in the final period. Kaiden Guhle banked it high off the boards to Connor McMichael who skated it deep into the open net.

With 1:58 to go in the third, Canada drew a hooking penalty.

READ: What to expect from the 2021 IIHF World Junior Championship

Levi made 29 saves for another shutout. Byram received best play of the game for Team Canada.

Next up, Canada will take on Russia in the semifinals on Monday at 6 p.m. ET in Edmonton, Alberta.

World Juniors: Team Canada shuts down the Czech Republic in quarterfinals
Shuttlecock and balls: The fastest moving objects in sport
Getting vertical: The highest jumps in sport
Weekend Roundup: Team Canada athletes glide to the podium worldwide
Korea 101: Korean Customs and Traditions
Labbé: A story of depression, a bronze medal and the power of resilience