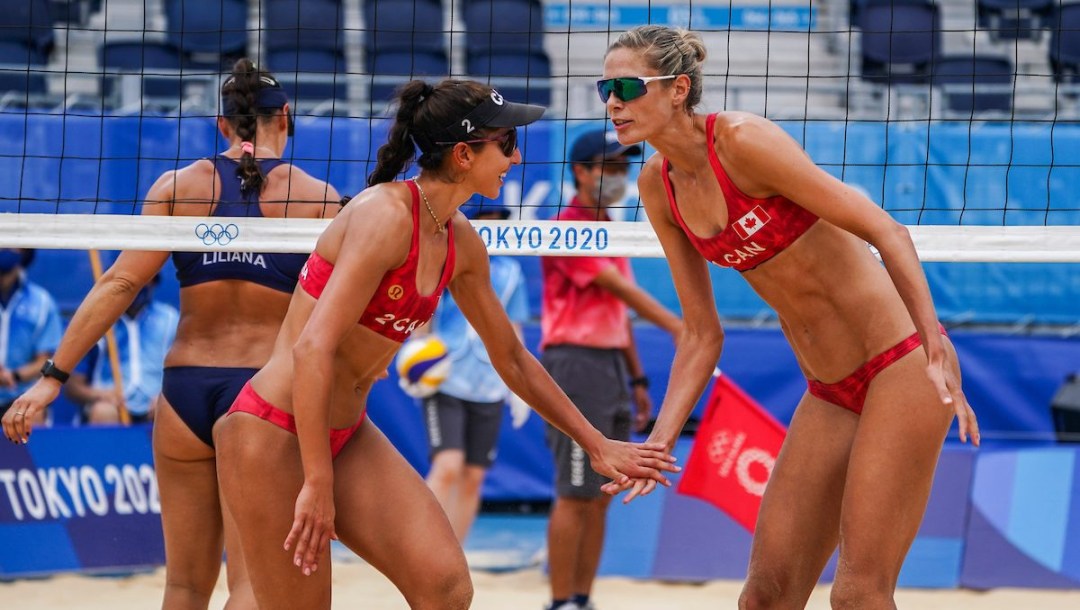 Both Canadian duos will compete in the women’s beach volleyball quarterfinals at Tokyo 2020.

The team of Sarah Pavan and Melissa Humana-Paredes defeated Spain’s Liliana Fernandez Steiner and Elsa Baquerizo McMillan 2-0 (21-13, 21-13) in the Round of 16, earning them a spot in the quarterfinals. They’ll join fellow Canadian duo Heather Bansley and Brandie Wilkerson in the quarters, who earned their spot with a dramatic 2-1 (22-24, 21-18, 15-13) upset win over third-ranked Kelly Claes and Sarah Sponcil of the United States.

It’s been a fairly smooth ride for Pavan and Humana-Paredes, who finished first in their preliminary round group with a 3-0 record. The two had little trouble with Spain in the Round of 16, winning both sets 21-13 in a quick 38 minutes. Canada earned seven block points in the victory compared to Spain’s one.

Pavan and Humana-Paredes have yet to lose a set in Tokyo. The reigning world champions are the top-ranked team remaining in the tournament. They’ll face Australia’s Mariafe Artacho del Solar and Taliqua Clancy in the quarterfinals.

“It’s been really special to play the way that we’re playing and keep looking forward,” said Humana-Paredes. “We’re in the quarterfinals. We have a great opportunity in front of us. These are the moments that we’ve dreamed of and that we’ve worked for and that we live for.”

Humana-Paredes added that she expects the quarterfinal matchup against Australia to be a challenging one.

“I’m excited. I know this is going to be a really good game. It’s going to be against a really tough opponent and we’re going to have to bring our ‘A’ game – which I think we’re trending in the right direction.”

Bansley and Wilkerson finished third in their group with a 1-2 record, which was good enough to earn a spot in the Round of 16. After dropping the first set 24-22 to the United States, the Canadians — despite trailing by as many as six points — climbed back to take the second set 21-18.

“I think it goes to show the experience and even the leadership from Heather,” Wilkerson said. “I can speak for myself, where we just had to kind of look to each other for advice, confidence and just sticking to the plan and staying very present to each point. Anything can happen in these games, these are high-level games, you can never really ever be comfortable, even with something that seemingly seems like such a large gap. So I think we were just ready to win today and we weren’t going to give it up.”

Canada had a strong third set, trailing only once en route to a 15-13 win.

One of the keys to Canada’s victory was maintaining focus after a lengthy challenge late in the third set — which ultimately went in Canada’s favour. Bansley said the tournament is often more challenging mentally than it is physically.

“This whole tournament is about managing emotions and expectations, and so I think that Brandie and I definitely did a better job as a team of doing that today compared to our play in pool play.”

Bansley and Wilkerson will take on Latvia’s Tina Graudina and Anastasija Kravcenoka in the quarterfinals.

“We want to play our best,” said Bansley. “And I think that’s been our goal. And we’re just taking it one match at a time, and especially (in the Round of 16), it was really point by point. And it paid off for us and we’ll look to play similar and play our best.”

The Canadians are on the same side of the playoff bracket, so a semifinal showdown is on tap if they both win their quarterfinals. That would guarantee Canada its first Olympic medal in women’s beach volleyball and the first since John Child and Mark Heese won bronze in the sport’s debut at Atlanta 1996.