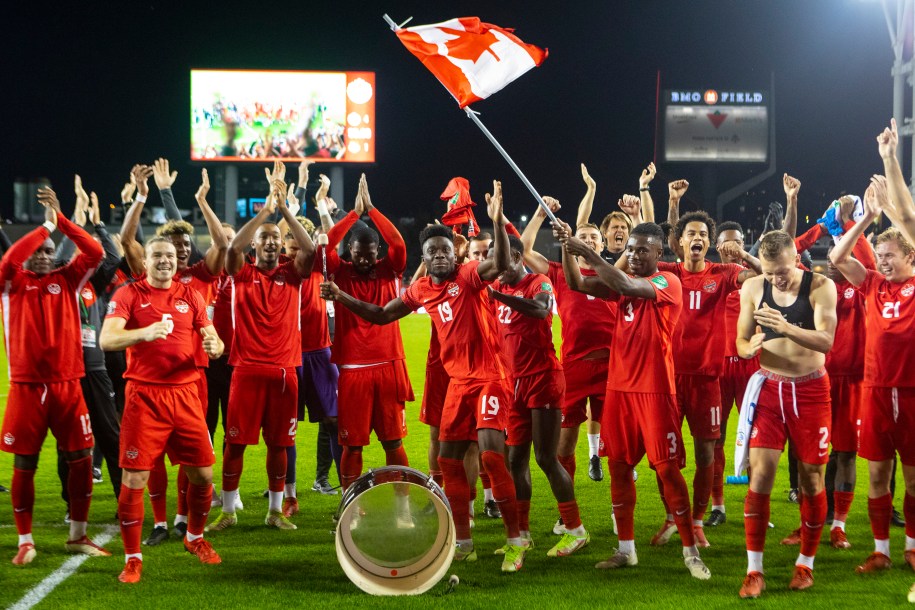 Canada’s road to the FIFA World Cup is heating up

Six matches into the final round of the Concacaf Qualifiers for the FIFA World Cup Qatar 2022, Team Canada remains unbeaten and sits in position to qualify for its first men’s global soccer championship in 36 years.

Four draws, two wins, and not a single loss.

As it stands, Canada sits in third place (10 points) trailing only Mexico (14 points) and the United States (11 points) after leapfrogging Panama with a 4-1 victory Wednesday night in Toronto.

The come-from-behind win saw Canada score four unanswered goals including a masterful end-to-end goal from Alphonso Davies that had fans and social media alike in awe at the world-class display.

Here’s a recap of how Team Canada got to this point, and what it has to do to qualify for its first World Cup since 1986.

In June 2020, Concacaf announced a new format for World Cup qualifying. Over the course of three rounds, 35 teams would be eligible to go after just four spots in Qatar.

In the first round, Canada took care of business by going 4-0-0 against Suriname, Bermuda, Aruba, and Cayman Islands. In a round-robin format, they outscored opponents 27-1, winning every match in convincing fashion.

The six teams that finished atop their groups were then paired for a head-to-head elimination round. Canada drew Haiti, and had to win on aggregate in a two-game home-and-away series.

After taking a 1-0 lead from the first match, Canada finally broke through in the second half of Game 2. An own goal from Haiti’s Josue Duverger provided a cushion before Canada added goals from Cyle Larin, and Junior Hoilett.

“After that goal, you could sense it. It was almost like the bottle top had been released for the guys and they could just drop their shoulders and let the talent start to flow,” Canada manager John Herdman said postgame.

The five highest ranked teams in Concacaf awaited the three qualifiers in what’s known as the ‘Concacaf Octagonal.’

On September 2, Canada played to a 1-1 draw in Toronto against Honduras.

The first game featured a series of firsts. It was Canada’s first game on home soil since October 2019 due to COVID-19 restrictions and 14,882 fans filled BMO Field in what was also Canada’s first World Cup qualifying match since 1998.

Canada’s highly anticipated match against the U.S. drew over 43,000 fans in Nashville, Tennessee. After falling behind by a goal to start the second half, Cyle Larin calmly buried a goal on a perfect pass from Alphonso Davies. It was Larin’s 13th goal of the entire qualifying tournament, and Canada came away with a 1-1 draw.

Canada got its first win of the tournament after dominating El Salvador, 3-0, in front of home fans in Toronto on September 8.

After away draws with Mexico (1-1), and Jamaica (0-0), Canada got their second win of the tournament in convincing fashion against Panama on October 13. In the fifth minute, Panama’s Rolando Blackburn netted a cross to quickly quiet the crowd. From that point Canada dominated in every facet. After tying the game in the 28th minute, Canada netted three goals in the span of 12 minutes in the second half to send BMO Field into a frenzy.

The win allowed Canada to jump ahead of Panama in the standings and sit in third place with eight games remaining. The top three teams will automatically qualify for the World Cup.

Canada will be back in action next month as they will host a set of crucial games in Edmonton. They will play Costa Rica on November 12 to conclude the first half of fixtures, before Mexico comes to town on November 16. Match play concludes in March 2022.