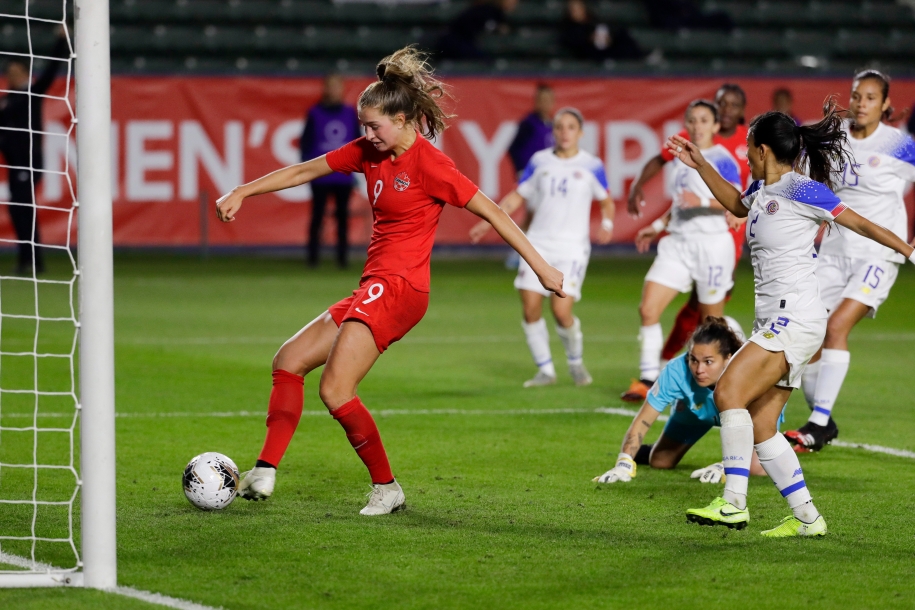 Jordyn Huitema made her Olympic debut at Tokyo 2020 where she helped Canada win the gold medal. She saw action as a substitute in Canada’s last four games, including the final against Sweden.

Huitema was named to the senior team in 2017 and became one of Canada’s youngest ever goal scorers when she netted a pair in a friendly against Costa Rica. On July 12, 2017, Huitema became the first Canadian to score for the U17, U20, and senior national teams in the same calendar year. For her efforts she was named the 2017 U17 Canadian Player of the Year.

2018 would be an even busier year for Huitema, starting with the U20 CONCACAF Championships. She scored five goals in five games, helping Canada to a fourth-place finish. She was awarded the Golden Boot and named to the best XI. She then captained the U17 Canadian team to their best-ever fourth-place finish at the FIFA U17 World Cup. Huitema joined the senior team for a silver medal finish at the CONCACAF Championships. At the end of the season, she was awarded the Canadian Youth International Player of the Year. By the time she finished her international youth career, Huitema had 23 goals, second all-time in Canadian soccer history behind only Christine Sinclair.

In 2019 Huitema joined Canada for her first senior FIFA World Cup, but it was at the 2020 CONCACAF Olympic Qualifying Tournament where Huitema broke out. She led the way offensively, netting seven goals and being awarded the Golden Boot. One of those goals was the game winner against Costa Rica that punched Canada’s ticket to Tokyo 2020.

In 2015 Huitema moved away from home and joined the Vancouver Whitecaps Elite REX Program. She played there until signing with the TSS FC Rovers of the second tier WPSL in 2018. But before making an appearance with the club, she was invited to play with PSG Féminines at the Women’s International Champions Cup, but did not sign a contract to maintain her NCAA eligibility. In January 2019, Huitema decided to forgo college, becoming the first Canadian woman to turn pro right out of high school in signing a four-year contract with the French club. She quickly started setting records for Canadian women in Europe. In her first season she scored four goals in four Champions League games, helping PSG to the semifinals. She added another two to her total the following year and became the top Canadian goal scorer of the UEFA Women’s Champions League in the process.

A Little More About Jordyn

Getting into the Sport: Started playing at age 4 and joined the local boys team when she was 10 because the girls team ‘wasn’t competitive enough’… Biggest role model in the sport is Canadian teammate Christine Sinclair because of her leadership abilities both on and off the field… Outside Interests: Grew up also competing in swimming and hockey…