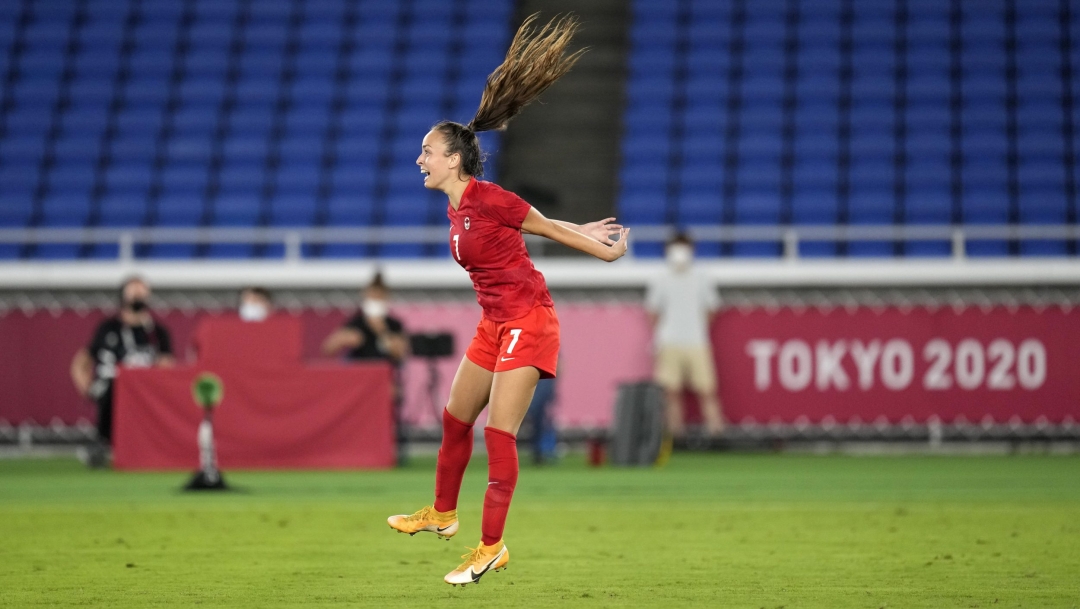 In her Olympic debut at Tokyo 2020, Julia Grosso scored the goal in the penalty shootout against Sweden that clinched the gold medal for Canada. Grosso had come into the final after halftime, making it the fifth match of the tournament in which she had seen action.

Grosso made her international debut as a member of the U15 Canadian team at the 2014 CONCACAF Championships. She helped Canada win a gold medal, defeating Haiti on penalties in the final. She joined the U17 squad for the 2016 CONCACAF Championship where she was named to the tournament’s Best XI team as Canada came away with a bronze medal and qualified for the U17 FIFA World Cup later that year. She started all three games for Canada at the World Cup, but they bowed out in the group stage.

In 2017, Grosso made her senior team debut, coming on as a sub during a friendly against Team USA. That year she also represented Team BC at the Canada Summer Games where she was selected to the tournament all-star team.

In 2019 Grosso won her first senior international medal, helping Canada to bronze at the Algarve Cup. She was named to the roster for the France 2019 World Cup but did not appear in any games. In 2020 she started one game and came on as a substitute in another as Canada won silver at the CONCACAF Olympic Qualifying tournament, securing their spot at Tokyo 2020. Grosso was also a member of the third-place team at the 2021 SheBelieves Cup.

Grosso plays collegiately for the University of Texas where she was named the 2018 Big 12 Freshman of the Year and selected to the conference Second-Team. She was a Big 12 First Team pick in 2019 and named to the All-American Third Team.

A Little More About Julia

Getting into the Sport: Started playing soccer at age 5… Likes the creativity soccer requires as well as the team aspect and the culture around the game… Has wanted to represent Canada since watching the 2015 FIFA Women’s World Cup on home soil… Outside Interests: Enjoys reading, listening to music, playing volleyball, swimming at the lake, and being out on the boat with friends… Odds and Ends: Biggest inspiration has been her dad, Carlos, because he continues to push her and motivate her to get better… Always has pasta as a pregame meal and always puts her equipment on left to right… Collects keychains everywhere she travels… Favourite motto: “There is a beauty in the struggle”

Victoria Pickett was 15 years old when she made her debut in the Canadian youth program in 2012 and won...