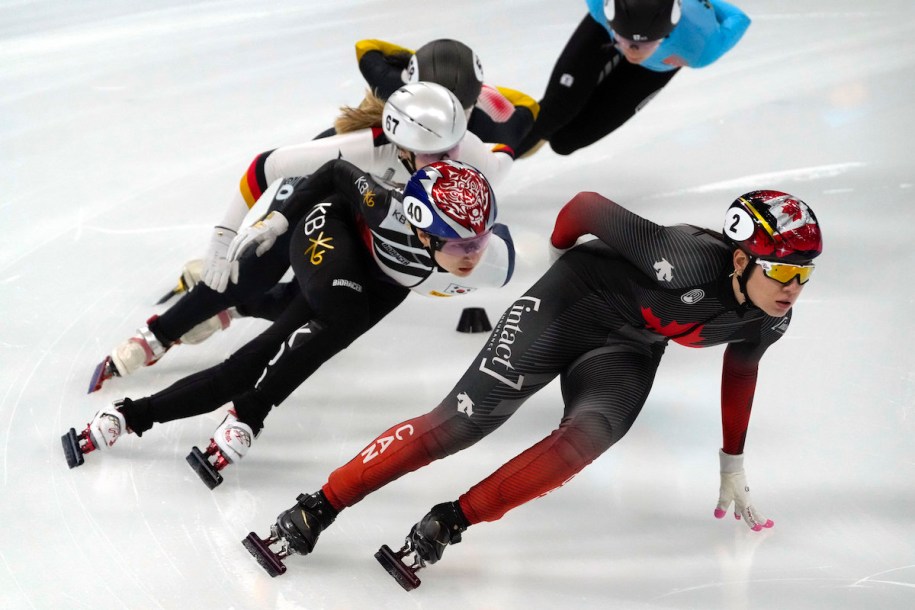 Canadian short track speed skaters landed in Beijing to kick off the first ISU World Cup of the 2021-22 season. The competition at the Capital Indoor Stadium will also serve as an official test event for the Beijing 2022 Olympic Winter Games, which will take place in four months’ time at the same venue.

While the Canadians started at the back of the pack to conserve energy, 21-year-old Sarault made a strategic move to the front with six laps remaining. Boutin was pushed to the outside of the track mid-race by a skater who was later penalized for the move. Sarault was passed by a trio of Korean skaters in the last lap, but she didn’t let it end of her medal chances. Two of the three Korean skaters crashed in the final turn and she was able to thrust back into podium position.

Sarault told Speed Skating Canada, “I definitely wasn’t expecting this today. During the warm-up, I was having a bit of difficulty with my boots and my blades. I was going into the races just planning to have fun, to try to make the B Final and to work on what I have to do tactically. I ended up with a silver medal, so I’m proud of myself for overcoming what I didn’t think I could and I’m excited for what is next!”

The remainder of Saturday’s competition provided mixed results for the Canadian team. On the men’s side, Charles Hamelin (2:19.571) and Steven Dubois (2:21.085) finished fourth and fifth respectfully in the men’s 1500m B Final to earn valuable World Cup points towards Olympic quota spots.

Jordan Pierre-Gilles was the lone Canadian to advance past the quarterfinals in the 500m but did not have the chance to race in the finals after he was penalized for a false start. Boutin faced the same fate earlier in the day after being removed from the women’s 500m quarterfinals with a double false start penalty after the race was called back several times due to falls in the opening corner. In the relay semifinals the Canadian women placed third and advanced to the B Final. The men were penalized and will need to wait until the next World Cup in Nagano, Japan for another opportunity to race the relay as a team.

Sarault’s second place result marked an opportunity for Canadians to celebrate, being the first World Cup since the 2019-20 season due to the COVID-19 pandemic.

Action continues on Sunday, the final day at the ISU Short Track World Cup in Beijing as Canadians battle with Olympic qualification on the line.