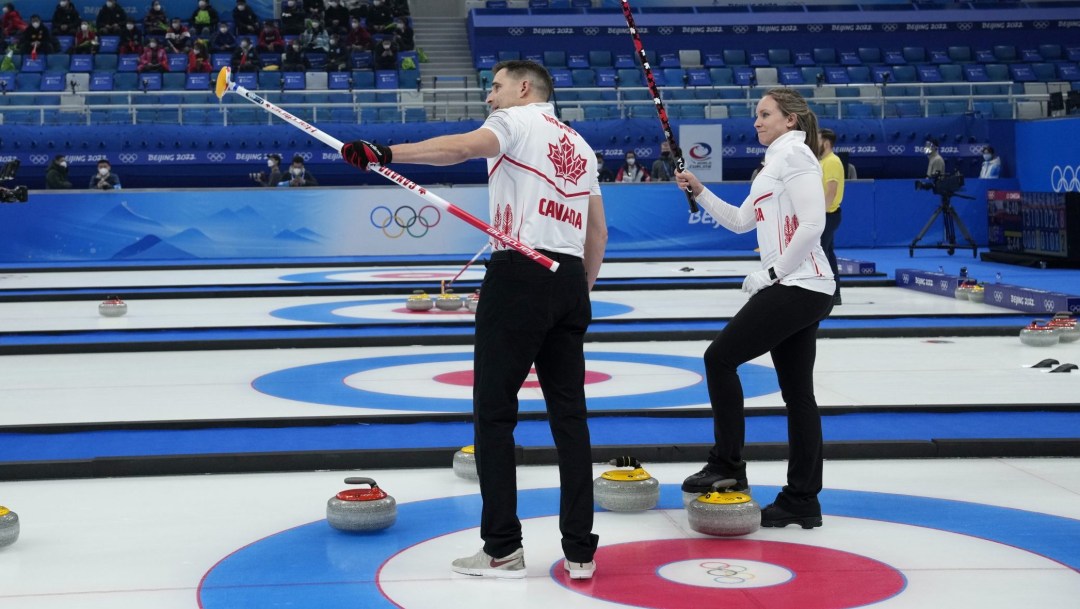 Team Canada stole five points in the fifth through seventh ends for a critical 7-2 victory over the United States on Saturday to improve hopes of successfully defending the Olympic gold medal in mixed doubles curling.

John Morris has said all week and repeated it again after the fourth end Saturday – the team that plays best in the second half usually wins, and that was so true against the U.S. The teams were tied 2-2 after the fourth end but the U.S. had been putting pressure on Canada and it took some point-saving shots by Rachel Homan to keep the score tight.

But a steal of one in the fifth changed the tone, another steal in six put Canada in control, and three in the seventh encouraged Vicky Persinger and Chris Plys to concede.

The win by Morris and Homan was a much-needed bounce-back win after losing to Sweden 6-2 earlier in the day. It was also critical because Canada and the U.S. went into the game tied for fourth place at 3-2 and only four teams will advance into the playoffs. Each team has three games remaining.

Canada and the U.S. battled rock by rock, trading singles through the first half of the game and all four players made more good shots than misses. The result was neither team was able to produce a multiple scoring end. And there were no steals until the fifth when Homan and Morris both made excellent draws with their first stones and Persinger’s final rock, an angled tap back, came up millimetres short.

It took a measure to determine Canada scored and that’s as tight as the game was until the seventh end. It was a rare miss – Persinger wrecked on a guard with her final stone – that gave Canada its game-changing steal in six. That came against a U.S. power play, a strategy that usually produces a multiple scoring end for the team with hammer.

Team Canada’s three-game winning streak had come to a screeching halt in the morning draw when they ran into a razor sharp Swedish duo that rolled to a dominating six-end victory.

Sweden’s Almida de Val and Oskar Eriksson didn’t miss a shot through four ends as they built up a 5-1 margin by stealing singles in the first two ends and taking total control of the game with three in the fourth end.

“They played almost a perfect game,” Morris said of the Swedish duo. “We got behind early and couldn’t climb back. These things happen in mixed doubles. To be honest I would rather have the crap kicked out of me like that, rather than lose in an extra end on a measure. Those are harder on the brain.”

Oddly enough, it was the only time in their first six games that Canada had the hammer to open the game.

“Probably had our best draw to the button,” coach Scott Pfeifer said of the pregame draw that gave Canada the first-end hammer. “Just a few points in the first end where the tide could have turned easily the other way. Unfortunately we gave up the steal and didn’t see the bounce back that we kind of expected, so it was disappointing.”