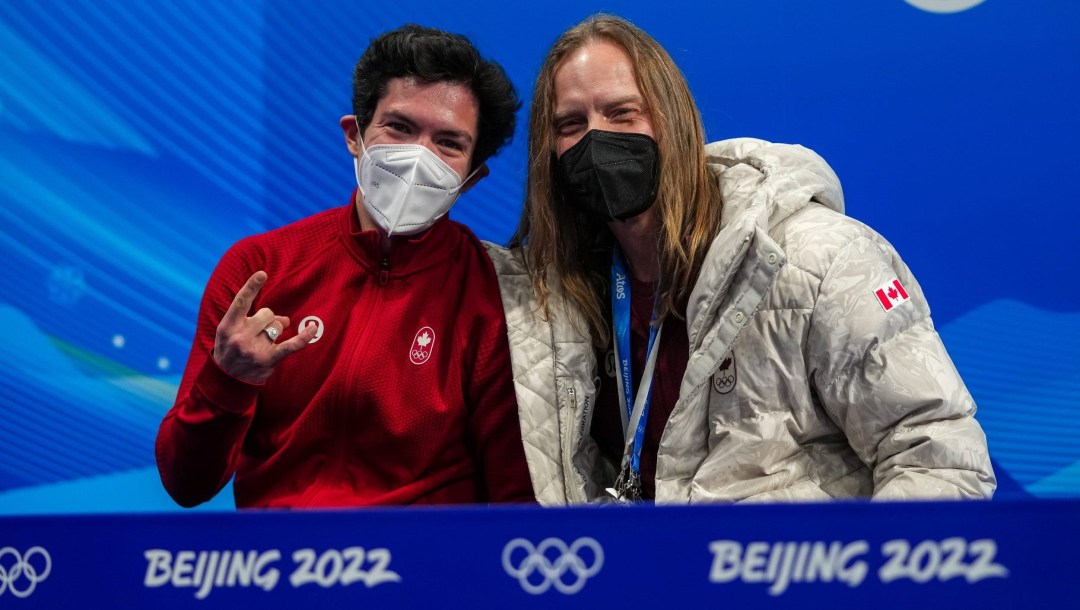 Keegan Messing ‘stoked on life’ after wild ride to Beijing 2022

If Keegan Messing was feeling the effects of his frantic, exhausting journey just to get to these Olympic Winter Games, he certainly didn’t show it during the men’s short program on Day 4.

Messing began his routine with a wry, defiant smile and landed three clean jumping passes — highlighted by a stellar quad toe-triple toe combo — to skate to a ninth-place finish. That easily advances him to the free skate on Day 6. There was nothing in his performance to suggest that he’d arrived in Beijing just 24 hours earlier, following an epic saga that began with an unexpected positive COVID-19 test just before his planned departure from Canada.

As his teammates boarded the charter plane en route to Beijing, Messing was confined to a Vancouver hotel for a week, unsure of whether his Olympic dream was still alive.

“Keeping the positive mindset was probably the hardest thing I had to do,” said Messing. “Lots of calls to my wife, lots of calls to my son, watching him do stuff for the first time while I’m sitting in a bed, not doing anything, waiting for my quarantine to end, making me feel like I was wasting my time away from home, away from my family.”

After four negative tests, Messing was finally allowed to leave Canada — but the route was hardly a direct one. He had to connect from Vancouver to Montreal to Frankfurt to Milan and finally to Beijing. And that was after he had already travelled from his home in Girdwood, Alaska.

“The journey here was crazy. I’m used to long trips but this takes the cake,” he said. “To start in Vancouver and then to go over the Atlantic Ocean instead of the Pacific, it definitely felt like we were going in the wrong direction.”

Completing one final COVID test upon arrival, Messing had mere minutes to rush onto a bus and head to training. He didn’t even have time to shave before hitting the ice, something he noticed when looking at photos after the fact.

Despite the arduous trek and the uncertainty, Messing knew that all the work and preparation put in ahead of time, spread out over a lifetime on the ice, would leave him in a good position.

“I’ve been doing this sport for 27 years and something I’ve learned in this COVID time is no matter how many hurdles are put in front of you, your body remembers how to compete,” he said. “That’s what we trusted here.”

This was Messing’s second travel adventure in less than a month. In early January, it took him three flights and 33 hours to get from Anchorage to Ottawa to compete at the Canadian championships. His luggage was lost en route and the day before the short program he practiced in jeans and a newly-acquired pair of white skates. Luckily his suitcase was found and he went on to win his first national title.

“I’m stoked on life right now to be able to go out right now and do what I did,” said Messing after his showing at Capital Indoor Stadium. “We’ve just been keeping a happy-go-lucky attitude. To hop on Olympic ice and put up a performance I can leave happy with, it really means a lot.”

Messing said he’ll be “forever thankful” to the behind-the-scenes team that got him to Beijing, as well as long-time coach Ralph Burghart’s unwavering belief that the dream would come to fruition.

Above all, it was his wife and 7-month-old son Wyatt that helped Messing persevere and make it to these Olympic Games.

“They constantly were there for me. I had thoughts of home, and of my family, and they were able to keep me strong,” he said. “When you’ve got a family, you kind of feel like you’ve got it all, and so it takes a little bit of the weight off.”