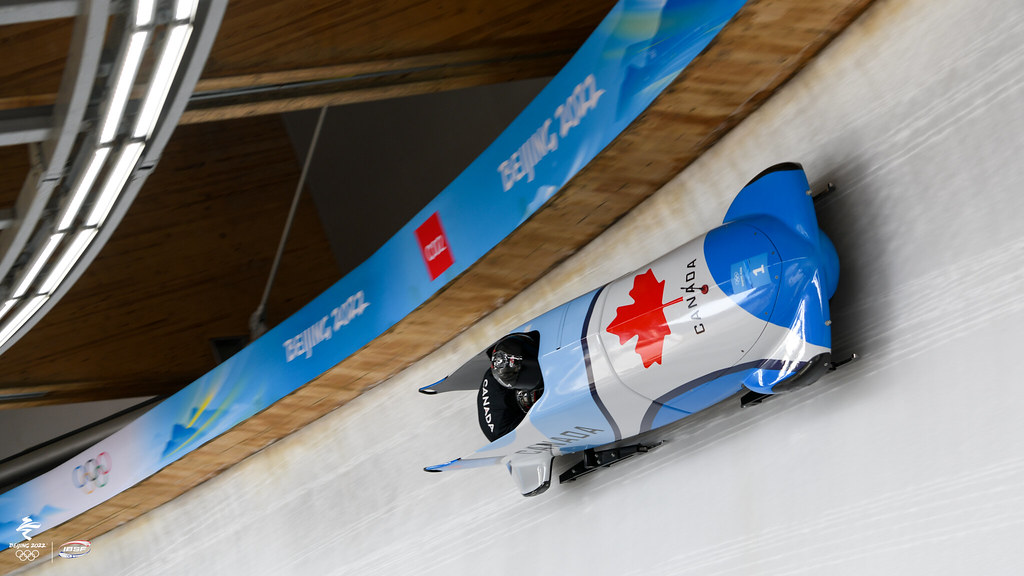 Four years ago at PyeongChang 2018, Justin Kripps won the gold medal in the two-man event with now retired-brakeman Alex Kopacz. In fact, they shared the honour with Germany’s Francesco Friedrich and Thorsten Margi.

The Canadian — now with Cam Stones in the back of his two-man sled — will be vying for the top of the podium again in Beijing, as will the Germans. And while it has all the makings of a rivalry — they did finish 1-2 in the IBSF World Cup rankings this season — it’s more of a friendship in Kripps’ eyes.

“We got a special bond sharing the Olympic gold medal in PyeongChang,” said Kripps. “I have a lot of respect for those guys and I hope they have a good race.

“But this is the Olympic Games. It’s four runs, anything can happen. It’s a track where people have less experience so I think it’s going to come down to race day.”

As for that track at the Yanqing National Sliding Centre, Kripps has said that it’s smooth, hard and shaped pretty well. But there’s one area — corner 13 — that is looming large in the minds of competitors.

Earlier in the Games, numerous luge athletes crashed on that very corner. And, of course, Kripps has his own personal history with crashing at the Olympic Games. In the second heat of the four-man event at Sochi 2014 (his first Games as a pilot), his sled overturned on a curve.

But while calling it “pretty tricky”, Kripps said he doesn’t think corner 13 will have the massive impact that it did in luge. Higher on his priority list are corners 2 and 6, both of which could cause the bobsledders to lose valuable time early on in a heat.

Either way, Kripps isn’t letting the responsibility of defending his Olympic title weigh too heavily on his shoulders. If anything, it’s the opposite.

“I almost feel like there’s less pressure because I’ve already won an Olympics and I’m fortunate enough to have a gold medal sitting at home,” he said. “I would love to win another one but it almost feels like the pressure’s off in a way and I can have fun with it, and that’s the same way I approached PyeongChang.”

Kripps and Team Canada’s full slate of sleds will zoom down the track decked out in a Second World War-era paint scheme meant to honour the history of the Royal Canadian Navy.

In an interesting side note, his teammate Christopher Spring will be driving the four-man sled that Friedrich piloted to gold four years ago.

“He definitely wouldn’t have sold the sled if he didn’t have something better, right? It’s a very expensive item to have sitting in your garage unused, so I can see why he sold it,” Kripps said after a training session in Beijing.

“I’ve talked to him about it before. We both want to go into races, where if somebody has their best race, then that’s the reason they beat you. It’s not because they don’t have what they need or they don’t have the sled or the runners or whatever.

“With me and Chris, we share all of our driving lines, our equipment set-ups. I feel like on my best day I can beat him and he feels like on his best day he can beat me. And that’s what we want it to be — to come down to execution on race day, and I know Francesco and those guys feel the same.”

Kripps can make some history of his own. A repeat performance from four years ago would make Kripps the only Canadian man to win multiple Olympic gold medals in bobsleigh.

It would also be a triumphant way for the 35-year-old to ride off into the sunset, should he choose to retire after these Games.

“I think about it. I mull it over and I’ve decided to wait and make a decision in the summer,” said Kripps. “It depends on a lot of factors. I’m getting married this summer. I’m sure a lot of people will retire, brakemen will retire and stuff like that, and we’ll just see what it looks like.”

Bobsleigh gets underway on Day 9 in Beijing, with the Olympic debut of the women’s monobob, followed a day later by the start of the two-man event.