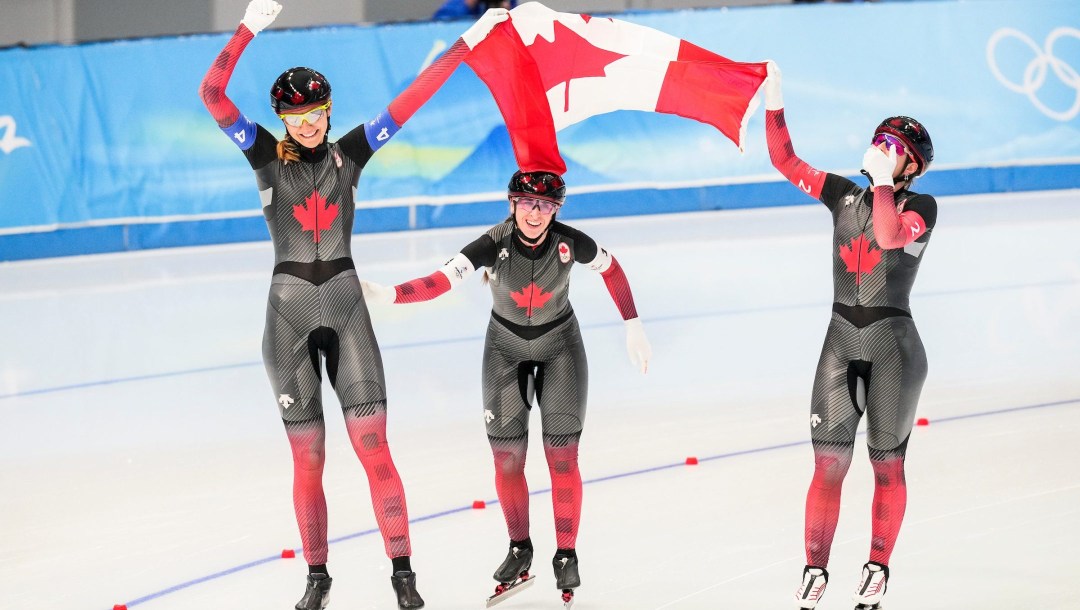 After a solid semifinal race in the women’s team pursuit, the Canadian trio of Ivanie Blondin, Valerie Maltais, and Isabelle Weidemann knew they were going to be stepping onto the podium.

But to cross the line as gold medallists and to set an Olympic record in the process, the Canadian team took it one step at a time. Now they get to soak it all in.

“It feels really surreal right now,” said Maltais. “There is such high emotion. Going into the race we wanted to make ourselves proud. We didn’t want to put pressure on ourselves, it is a privilege to be in this final. Coming across the line, I just couldn’t believe it.”

“We always have respect for the Japanese team,” added Maltais. “It was a perfect scenario. We thought, let’s take this opportunity to show up and once again, make ourselves proud. We felt really confident after the semifinal. We (knew) we can skate better, powerful and grind until the end.”

Racing first against the world champions from the Netherlands in the semifinal, the Canadian trio showed their speed endurance in a comeback win. Their time of 2:54.96 booked their spot in the gold medal race, where they would face the reigning Olympic champions from Japan, who had set the Olympic record in the quarterfinals three days earlier.

A tight race from the very start, Canada stayed close against Japan, trailing by 0.39 seconds heading into the bell lap. The race came down to the final turn, when Japan’s Nana Takagi slipped and crashed into the corner, solidifying Canada’s spot atop the podium as Olympic champions.

“What we did really well today is that we just focused on the present,” said Blondin. “We did the semifinals first, we didn’t even think about the final. We were just very present, focused on the tasks that we had to do to. In the final we had a great race. It was just a great performance, great execution. I can’t be more proud of this team.”

It is Canada’s first Olympic women’s team pursuit medal in 16 years, but it also represents Weidemann’s third medal at Beijing 2022. The gold medal completes her Beijing 2022 collection, as she adds it to her silver and bronze medals from the 5000m and 3000m events. She is the third Canadian speed skater to win at least three medals at a single Olympic Winter Games, after Cindy Klassen (five in 2006) and Gaetan Boucher (three in 1984).

Over the last few years and into these Olympic Games, the trio wanted to thank everyone for all their continued support to get them onto the Olympic stage as a part of Team Canada.

“We’re just so grateful to be representing Canada and to be here, skating at the Olympics for them,” Weidemann told Anastasia Bucsis from the CBC. “Family, friends, staff, we’re just so proud.”