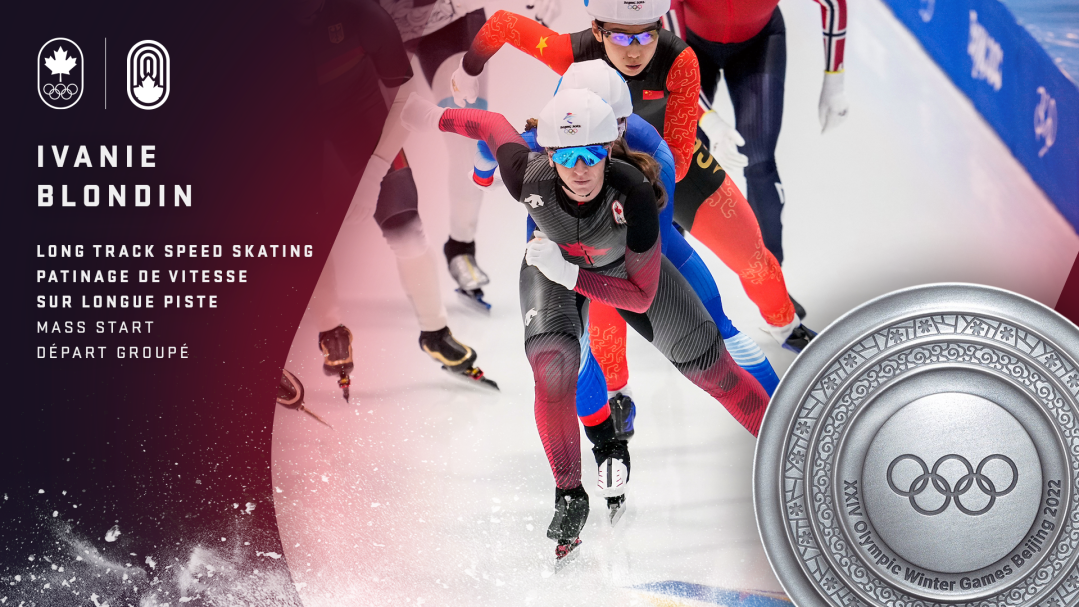 Ivanie Blondin has won silver in the women’s mass start for her second long track speed skating medal of Beijing 2022.

She adds to the gold medal she won in the team pursuit alongside Isabelle Weidemann and Valérie Maltais.

After 16 laps of the 400m oval, the race for gold and silver came down to just 0.06 of a second. As the pack of skaters went into the final lap, Blondin broke away with Irene Schouten of the Netherlands, but the Canadian was just edged out in the sprint to the finish line for the gold medal. Italy’s Francesca Lollobrigida came through for the bronze.

Maltais finished sixth in the final after winning two of the intermediate sprint laps. It has recently been part of the Canadians’ race strategy for Maltais to dictate the pace in the early going, while allowing Blondin to conserve energy back in the pack.

This is Canada’s first ever Olympic medal in the mass start, which was added to the Olympic program four years ago at PyeongChang 2018. Blondin had gone to those Games as a two-time world medallist but fell in her semifinal. She has since won a second world title in 2020 as well as world silver medals in 2019 and 2021. She won the overall World Cup title in the event in 2019-20 and came to Beijing as the number one-ranked skater in the mass start this season after reaching the podium three times.

Unlike four years ago, Blondin dominated her semifinal, earning points on two of the three intermediate sprints before crossing the finish first to advance to the final.

The intermediate sprints in the mass start comes at the end of the fourth, eighth and 12th laps. On each of those sprints, the first skater across the finish line earns three points, second earns two points, and third earns one point.

But the biggest points come on the final sprint, with the first skater to the finish line earning 60 points, second getting 40, and third getting 20. That means that the first three skaters to complete all 16 laps will be the medallists.