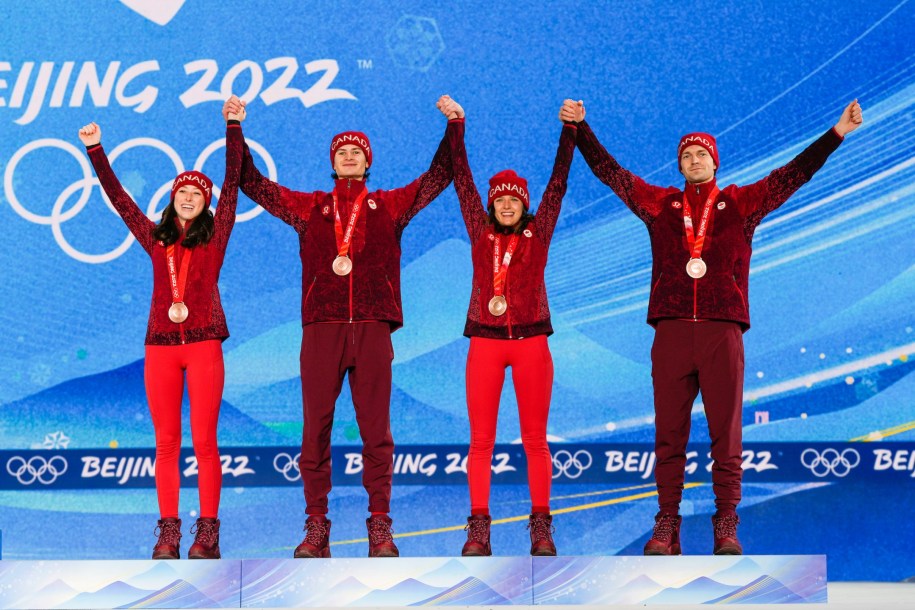 When the Olympics come around, we often turn our attention to the medal winners. It’s also a perfect opportunity to witness the emergence of some amazing new talent. Keep an eye out for these promising Team Canada athletes in years to come!

Sarah Fillier is the rookie everyone’s talking about on the Canadian women’s hockey team. At 21 years old, many team members say she’s a more talented player than they were at that age, both technically and physically, as well as mentally. In her first two Olympic games, under immense pressure, she collected three points against Switzerland and then two more against Finland. She registered 11 points during the Olympic tournament, including eight goals. Fillier was already garnering attention before the Games when she achieved the rare feat of playing for the U18, U22 and senior women’s national teams in the same calendar year.

While some of her teammates like Marie-Philip Poulin and Mélodie Daoust are at the top of their game at the age of 30, Fillier undoubtedly has big things in store.

Madeline Schizas was responsible for securing Canada an Olympic quota spot in the women’s event after she finished 13th in her debut at the ISU World Championships in 2021, just her second senior international competition.

It’s also fair to say that this Olympic rookie’s performance allowed Canada to compete in the final of the team figure skating event in Beijing. Before she stepped on the ice for her short program, Canada was in sixth place, and only the top five teams could advance to the final and skate their free programs. With a near-perfect performance that earned her a third-place finish, she helped move Canada up to fifth.

Among the historic performances by Canadian athletes at Beijing 2022 was the effort by first-time Olympians Antoine Cyr and Graham Ritchie in the men’s cross-country classic team sprint. Both have certainly earned their place on our list of rising stars after achieving Canada’s best-ever Olympic performance in the event.

After finishing fourth in their semifinal to advance to the final, they placed fifth overall. This is a result record that hasn’t been broken in almost 20 years: Canada’s previous best result in a men’s team sprint event in classical technique was 11th place at Turin 2006. Did we mention they’re both just 23?

Aerials skiing may be on the verge of a surge in popularity in Canada as two-time Olympian Lewis Irving and rookies Miha Fontaine and Marion Thénault surprised by winning bronze in the mixed team event at Beijing 2022.

As a new event on the Olympic program, this is a historic medal not only for the discipline, but also for the sport in Canada. Fontaine is just 18 years old, but has grown up in the freestyle skiing world because of his Olympian father Nicolas. Thénault only learned to ski four years ago after transitioning from gymnastics when she was identified via RBC Training Ground. We look forward to watching this duo develop over the next few years.

At only 17 years old, Quebec’s Olivia Asselin has already been on the international circuit for four years. In her first World Cup events in 2019-20, she placed in the top 10 in four of her five events. It’s no surprise, then, that in her first Olympic Games, she finished eighth in the new freestyle big air event.

Asselin also competed in the women’s slopestyle event, where she earned a spot in the final. It’s safe to say we haven’t seen everything she’s capable of yet.

Long track speed skater Connor Howe has been in the spotlight since the start of Beijing 2022. His first medals on the World Cup circuit came only one year ago when he won silver and bronze in the team pursuit. Just a few months ago, in October 2021, he became the Canadian champion in the 1500m and then picked up his first individual World Cup medal in December, again in the 1500m.

It’s only fitting that he stood out at that distance in his Olympic debut, finishing fifth in the event. He also performed well in the 1000m, placing 12th. We bet you’ll be keeping tabs on him for a long time.

Snowboarder Brooke D’Hondt was the youngest athlete in the Canadian delegation at Beijing 2022. She turns 17 on March 9. D’Hondt is fairly new to the senior international circuit. She took part in her first FIS World Cup in January 2021 and was among the new athletes to watch in Beijing 2022 in snowboarding and freestyle skiing. We watched and we were impressed: D’Hondt finished 10th in the Olympic halfpipe final.

Joining veteran Mackenzie Boyd-Clowes on the Canadian ski jumping team in Beijing 2022 were rookies Alexandra Loutitt, Abigail Strate and Matthew Soukup. The Canadians surprised the ski jumping world by winning bronze in the mixed team event, a new addition to the Olympic program.

That success brought great exposure to their sport in Canada, which they hope will be a boost for the future. Since the closure of the ski jumping facility that was used for the 1988 Winter Games, the national team has been based in Slovenia, which has kept these athletes away from home for most of the year as they compete and train for special moments like the ones they experienced in Beijing.

Canada had four of the eight top finishers in the women’s ski cross event. Though Marielle Thompson claimed most of the headlines by winning her second Olympic medal, the performances by Courtney Hoffos and Hannah Schmidt should not be lost in the shuffle. In their first Olympic appearances, they made it to the small final, finishing sixth and seventh, respectively.

Canada has won six Olympic medals in women’s ski cross in the four Games it has been on the program and with young talent such as Hoffos and Schmidt still emerging, that dominance has a great chance of continuing.

Sarah Chase helped Canada win bronze at the 2018 Pan American Cup, the first medal won by the team since…