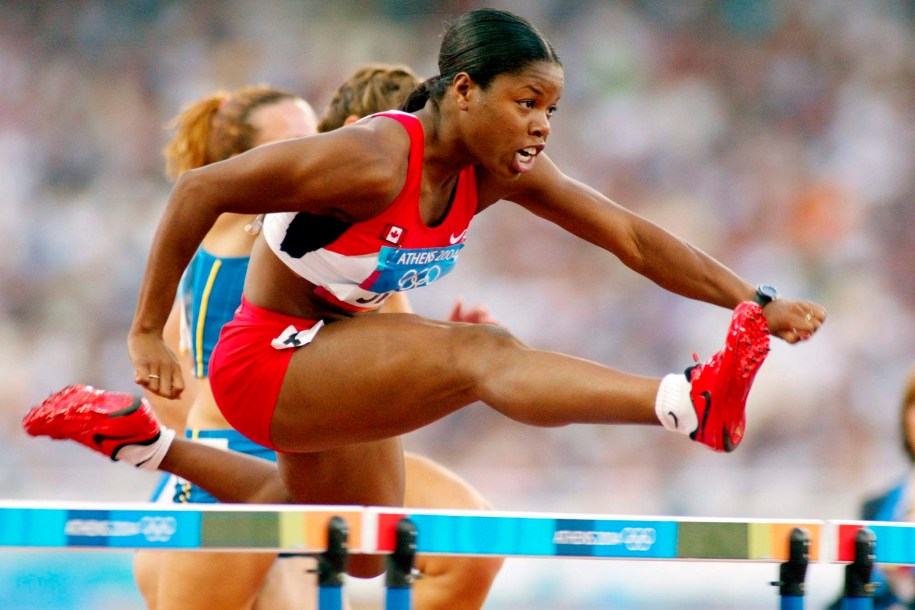 On March 8th, International Women’s Day, we are celebrating seven Olympians for their achievements on and off the field of play. Through their work, these athletes fight for equality and share a common goal to #BreakTheBias as they continue their Olympic legacy with a focus on creating safer and more inclusive sport experiences.

Twin sisters Sharon Firth and Shirley Firth-Larson have left an indelible mark on the sport of cross-country skiing in Canada. The Firth twins dominated Canadian cross-country skiing from the late 1960s to the mid-1980s, capturing 48 Canadian championships, and 79 national medals overall. They are Canada’s only female skiers to have competed in four consecutive Olympic Games, Sapporo 1972, Innsbruck 1976, Lake Placid 1980, and Sarajevo 1984.

Introduced to the sport when they were just 13 years old through a federal program in the 1960’s known as Territorial Experimental Ski Training Program (TEST), the young skiers committed to a grueling training schedule as they embarked on the rigorous training regimen. In the winter, their hours-long workouts were at times completed in total darkness and in temperatures as low as 40 degrees below zero. Training in challenging weather conditions was arduous but they were certainly up to the task. The twins were raised in the hunting and fishing tradition of the Dene people. Born in the remote township of Aklavik, Northwest Territories they grew up with a reverence for the great outdoors.

The twins experienced success early on in their careers winning silver (Shirley) and bronze (Sharon) in their national debut at the Canadian Junior Cross-Country Championships in 1968 after just one year with TEST. Shirley and Sharon relied on each other to mitigate the culture shock of national team life. Sharon has said that the cultural differences they encountered were “shocking”, highlighting how their eating habits were altered with the introduction of fast food. Their illustrious athletic careers came to an end upon their retirement in (Shirley) 1984 and (Sharon) 1985.

READ: So much talent, one family: Canadian Olympic siblings

Sharon became a youth program advisor in the NWT advocating for the positive influence of sport. Shirley and her husband Jan Larsson lived in Paris, France for twenty years. She lectured on Dene and Inuit cultures at universities and cultural centres throughout Europe. In 2005 Shirley moved back to the NWT. She died of cancer in 2013. Although they did not medal at either the Olympics or the World Championships, Sharon’s 26th place in the women’s 5 km race at the 1972 Olympics remains a Canadian best. This event was discontinued after the 1998 Olympics.

Freestyle wrestler Carol Huynh won Canada’s first Olympic gold medal in women’s wrestling at the Beijing Olympic Games in 2008. Standing 5’ 1” tall Huynh displayed physical dominance on the mat and has proven to be an agent for change for women in sport off the mat. Huynh’s breathtaking international athletic success puts her in the class of wrestling royalty. Raised in New Hazelton, British Columbia Huynh started wrestling in grade 10, mimicking her older sister who was one of the first women to compete on their high school wrestling team.

Following Olympic gold in 2008 she struck gold at the 2010 Commonwealth Games and was a two-time Pan American Games champion. Huynh has also achieved success at the World Championships where she totaled one silver and three bronze medals in 2000, 2001, 2005 and 2010. Born to ethnic Chinese parents from Northern Vietnam, Huynh is also an eleven time national champion. Following the London 2012 Olympic Games, where she brought home a bronze medal, Huynh retired from competition but her accomplishments wouldn’t stop there. Huynh was inducted to the FILA (renamed in 2014 as United World Wrestling) hall of fame in 2013.

Not willing to rest, Huynh led a campaign for wrestling’s Olympic reinstatement following an announcement that it had been dropped from the core list of Olympic sports in February of 2013. A six month lobbying blitz directed at the International Olympic Committee (IOC) led by Huyhn resulted in the sport being selected to return to the Olympic program following a single round of secret balloting by the committee in the fall of 2013. Huynh’s lobbying efforts expanded with a particular focus on women’s wrestling. She pushed for and got additional weight classes for women wrestlers added to the Olympic schedule. A press release sums up Huynh’s contentement with the Decision.

“… I am especially proud that this federation had the courage to redistribute weight classes between men and women, so that women now have additional opportunities to participate in the Olympic Movement.”

READ: Where are they now? Carol Huynh

In early 2015 Huynh was selected as a United World Wrestling Super 8 Ambassador for the global campaign focusing on the development of women in wrestling. As of 2020 the now 41 year old is the current coach of Wrestling Canada’s Next Gen team based in Calgary.

Born in Whitehorse, Yukon in 1989 Emily Nishikawa made her Olympic debut at the 2014 Winter Olympics in Sochi where she placed 42nd in the 15km skiathlon. Four years later she placed 44th in the same event at the Pyeongchang 2018 Olympic Winter Games. Nishikawa announced her retirement from international skiing in 2020 but her story in sport does not end there, in fact it deepens.

The Whitehorse Cross Country Ski Club member is on a mission to bring sport to the YT with a program she has created called, Northern LYTES (Linking Youth to Elite Sport).

“This program was developed as a way to inspire Yukon athletes to continue working hard in their sport and be inspired by Olympians attending their camps. Isolated from the rest of Canada, many of Yukon’s talented athletes do not get the same exposure to high level athletes and expertise that those developing in other parts of the country do.”

Nishikawa is one of 10 Olympians in 2021 chosen to lead projects which enhance communities through the Olympic values. Funds from the OLY Canada Legacy Grant awarded to Nishikawa will help kickstart the Northern LYTES program.

Born in Newfoundland and raised in northern BC, Leah Ferguson resides in Winnipeg, MB where she is committed to reviving wrestling in Indigenous communities in the province through her Push to North American Indigenous Games 2023 initiative. The 2012 Olympian, Pan American Champion, World Cup silver medallist is a recipient of the 2021 OLY Canada Legacy Grant. Funds from the Legacy Grant will be used to implement the grassroots wrestling program focused on Indigenous youth. Ferguson has designed the program to prepare Indigenous youth for the North American Indigenous Games (NAIG). The first Indigenous games were held in 1971 in Enoch, Alberta with 3,000 participants competing in sports and cultural events. Ferguson describes the NAIG in her Legacy Grant application as what can be “a life-changing experience often leading to a chance to attend university for many of these young athletes”.

The project will work with multiple different Indigenous communities in MB and the urban Indigenous community in Winnipeg to help restart wrestling programs negatively affected by the COVID-19 pandemic. Accustomed to building on one success after another, Ferguson is currently a program manager at Canadian Women & Sport and is working with her husband Jordan to build the Keystone Wrestling Club in Winnipeg, MB which they founded in 2017.

Growing up in Mallard, MB, a Métis community four hours north of Winnipeg, Brigette Lacquette found purpose in family and sport. Teased for a skin condition, she found an escape from the bullying through sport. She played basketball, softball and soccer but it was hockey that gave her a sense of hope. As a young player she imagined herself playing for Team Canada one day and dreamed of being able to see and travel the world through sport. In junior high school Brigette drew out a multi-year plan with her parents.

The plan was to win a hockey scholarship, play for Team Canada and maybe make it on to the Olympic team. Once the plan was set on paper Lacquette went to work making the dream a reality. Her dad bought her rollerblades and she would train on the side of the highway, her father in the family car alongside her, encouraging her. The dedication and streamlined focus paid off for Lacquette when she made Team Manitoba, the U18 Team Canada roster and attended University of Minnesota, Duluth on a scholarship. Following the deep disappointment of not making the 2014 Olympic team Brigette made the commitment to make her mental and physical well-being a priority. In December 2017 she found out she had made the Olympic squad, becoming the first First Nation woman on Team Canada’s Olympic hockey team. Overcome with emotion with the news that the final item of her 10 year plan had just been achieved, she, her mom and her dad cried powerful tears of joy. At the Pyeongchang Games in 2018 Brigette won a hard fought silver medal for Team Canada and came home an Olympic medallist.

READ: Team Canada athletes that gave us the feels in 2018

Proud to be a role model for youth and particularly Indigenous youth Lacquette currently plays in Calgary for PWHPA as part of the Dream Gap Tour. While playing the game Lacquette is also changing the game. Adding to an already phenomenally successful hockey career Lacquette is a pro scout for the Chicago Blackhawks. This pivotal position makes her the first Indigenous woman to scout for an NHL team.

Perdita Felicien is one of Canada’s most successful sprint hurdlers. The 10 time Canadian Champion’s best time for the 100 metres hurdles of 12.46 secs from 2004 still stands as the Canadian record. Her story is one of triumph, pain and resolution. In 2003, Felicien left the competition in her wake to capture gold at the World Championships in the 100 metres hurdles. At the 2004 World Indoor Championships she struck gold again. Felicien was the favourite going into the 2004 Athens Olympics but a fall after hitting the first hurdle in the finals erased any dreams of Olympic glory. Felicien’s mother helped rebuild her broken spirit telling her daughter that “she” was in fact, the gold medal.

Felicien would race again on the world stage winning silver at the 2007 World Championships and 2010 World Indoor Championships. Felicien was resolved to master the art of storytelling following her retirement from sport in 2013. She studied journalism and became a reporter with CHCH News in Hamilton. She then joined the CBC and has since covered multiple Olympic Games as a sports broadcaster. Felicien is host of the TVO children’s program ‘All Round Champion’ which premiered in 2020. The series features teen athletes in competitive events outside of their primary sport. Having established a formidable broadcasting career, Felicien branched out to the literary sphere and released her memoir, ‘My Mother’s Daughter’ in March of 2021.

The book, which became a national bestseller, is a raw account of the hardships her mother faced as an immigrant from St. Lucia, raising a family in Oshawa, Ontario with very little means. Her mother’s unyielding resolve to make a better life for her children through hard work and personal sacrifice did prevail. Felicien’s joy pertaining to her memoir’s success is unequivocal, “I never won an Olympic medal but this feels really nice.”  (source: By Blacks, “No Hurdles Can Keep Perdita Felicien From Living Her Truth”, April 19, 2021.)