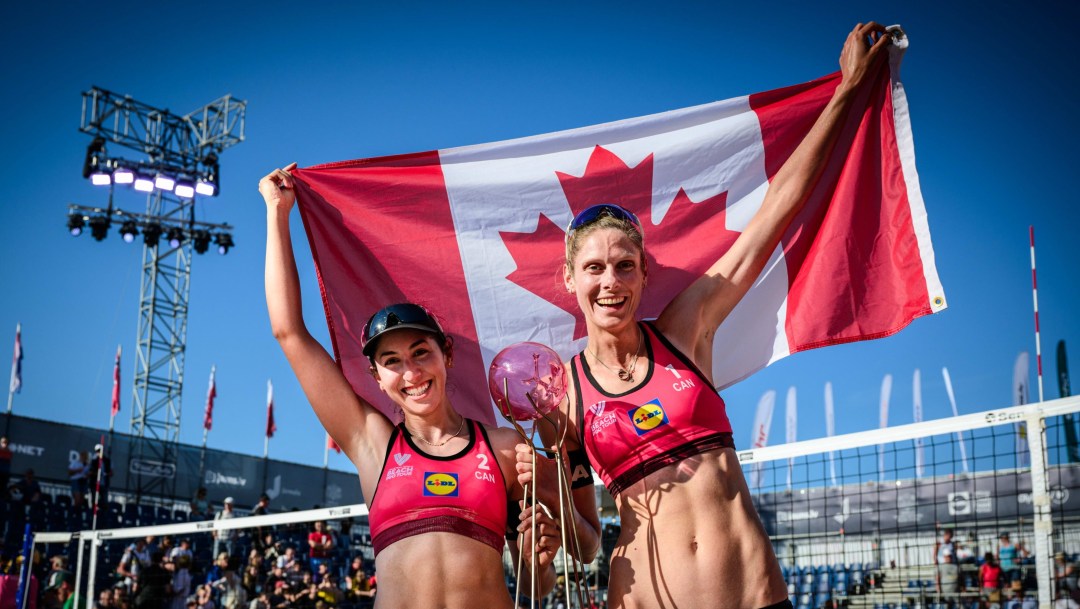 It might have been a quieter weekend on the international sports scene, but Team Canada still had a few standout moments to celebrate.

A dynamic duo in beach volleyball had the best possible final preparation for the world championships and a golfer scored his first career ace on the PGA Tour.

Here’s a quick look at what you might have missed.

Sarah Pavan and Melissa Humana-Paredes clinched first place at the Volleyball World Beach Pro Tour stop in Jurmala, Latvia on Sunday. The victory at the Elite16 event was their first major international gold medal since August 2019.

The Canadians recorded match wins against five different Brazilian teams, including a three-set triumph (21-19, 20-22, 15-7) over Barbara and Carol — ranked second in the world — in the final. This was the first international podium for Pavan and Humana-Paredes since they were runners-up at the World Tour Finals in October.

Next up will be the FIVB World Championships, taking place June 10-19 in Rome. Pavan and Humana-Paredes will be joined in the women’s draw by Sophie Bukovec and Brandie Wilkerson as well as Megan and Nicole McNamara. Sam Schachter and Daniel Dearing will be the only Canadians in the men’s draw.

Adam Hadwin (-2) finished 11 strokes off the lead at the Memorial Tournament, good enough for a tie for 18th. But the moment he’ll remember forever is scoring his first ever hole-in-one on the PGA Tour.

Hadwin got the ace on the 194-yard par-3 16th hole during Friday’s second round. Using his 7-iron, Hadwin landed his ball on the front of the green and it rolled perfectly, prompting some arm pumping celebration.

Corey Conners was the top Canadian in the tournament, finishing in a tie for 13th at three-under par.

Following his victory on Tuesday at the Golden Spike meet in Ostrava, Czech Republic, Jerome Blake had his eyes on the 200m podium at the Diamond League stop in Rabat, Morocco.

Blake couldn’t quite find the same speed on Sunday and finished fifth in 20.74 seconds. American Kenneth Bednarek took the victory in 20.21 seconds.

The only other Canadian in Rabat was Will Paulson, who was running in his first career Diamond League meet. He finished 11th in the 1500m in 3:38.23.

Throughout June, Canadian athletes will continue to compete around the world in preparation for the Bell Canadian Track & Field Championships taking place June 22-26 in Langley, B.C.

Sarah Douglas had an up and down week at the World Cup regatta in the Netherlands as she finished 13th overall in the ILCA 6 class. In the nine races, Douglas’ results were highlighted by third-, fourth-, and eighth-place finishes. Douglas, who won gold at the first World Cup of the season in April, noted that she couldn’t quite get her strategy right.

She’ll spend the next week training in the Netherlands to help prepare for the world championships which will take palce in The Hague in August.

Canada and Mexico are the two countries from the North and Central America & Caribbean region who have qualified for the jumping final.