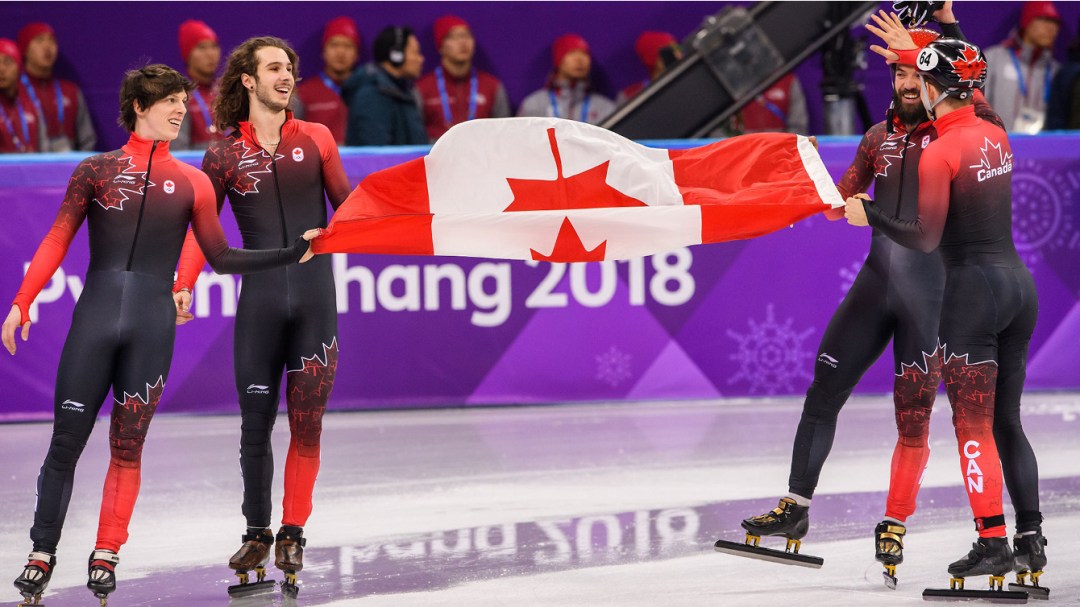 PYEONGCHANG (February 22, 2018) – Here is what you need to know about Team Canada at the end of Day 13 at the Olympic Winter Games PyeongChang 2018:

On what the bronze medal means, especially after not winning a medal in the men’s 5000m relay at the Sochi 2014 Olympic Winter Games:

“It’s a big progression. We came into these Games wanting revenge. Especially since Sochi. Sochi we had kind of a medium performance. We wanted to do our best and I think with a medal, we just bring a pretty good response.”

“We showed the world that we are one of the best countries in that sport. We trained so hard. The relay is so nice to win as a team, to show that together we are strong.”

On how satisfying this bronze medal is:

“Just show the work we have done the last four years. We are a new team right there. Two was there in Sochi, and two new guys. Just created this chemistry together. Was really nice. And also Francois HAMELIN (CAN) wasn’t on the ice with us but huge, huge part of the relays. This medal is to him.”

“We all four right there are getting the ceremony and the medal, but the whole Team Canada, not just here, but back home in Canada, it’s because of them that we have the medal right now. It’s something that means a lot for us because in Sochi we didn’t win like we wanted. Here, even if we didn’t win like we wanted, we are still on the podium. The team can be really proud of what we did. Once again it’s another medal for Canada. We are happy.”

“Oh, just incredible. I feel I did a lot of work and just to be consistent all the years. That was pretty unbelievable for me.”

On winning three medals at the PyeongChang 2018 Olympic Winter Games, her first Games:

“I don’t know how to express that but it’s just, I’m proud of myself, all the work I did with all my teammates and all my staff is just incredible. I know that I couldn’t do that alone.”

On her best memories from PyeongChang 2018:

“It’s all the moments that I have with my teammates. I feel we are five girls, really just different. “I feel in the condo we’ve been together, it was really unbelievable. It’s a small moment I’m going to keep for myself and my memories.”

On taking the silver medal after winning gold at the last two Games:

“Obviously in women’s hockey (it) is all different with the colour of the medal, but we work all year and it was tight game. I think it’s good for women’s hockey, but obviously it’s a tough one to swallow.”

“This team really gave their heart out tonight. It’s my second family and I’m so proud of all of them. This team was very special. We had a great group of veterans. The young ones as well, they were so mature throughout the year and they showed it at the Olympics.”

On her Olympic experience:

“Any time you have the chance representing your country at the highest level, there is no better feeling and it was amazing. We tried to make Canadians proud and hopefully we did.”

On losing the game:

“This is something you will never forget and will use for motivation going forward. It is not a good feeling at all. You work for four years for this and you dream about it every day and when it does not come true it is a tough pill to swallow. But I know we have a strong group and everyone will remember this moment and how much it sucks and use it for motivation.”

On how the competition showcased ladies’ big air:

“That was insane, Anna GASSER (AUT) deserved it (winning the gold medal) for sure, it’s so nice to see the girls doing more doubles, nines and 10s, it’s so good. “All the girls love the jump, that jump was perfect and we were able to do big tricks on it because it was really well built and really good. “We showed the world what we’re really capable of.”

“It’s pretty disappointing I couldn’t put out my best, but that’s kind of what I had today and that’s how it goes. As athletes we always want to do our best and when you don’t do your best you don’t feel proud of it. But I was happy to have made the finals and do a few jumps.”

On the introduction of big air at the Olympic Winter Games:

“I’m just really excited about the level of riding here today. It’s incredible and all the girls are throwing it down. I’ve had a really long career and I feel really lucky to have been able to compete competitively for this long and it feels really good to have seen the inclusion of both slopestyle and big air into the Olympics. I’m just so proud of these woman and where we’ve taken it.”