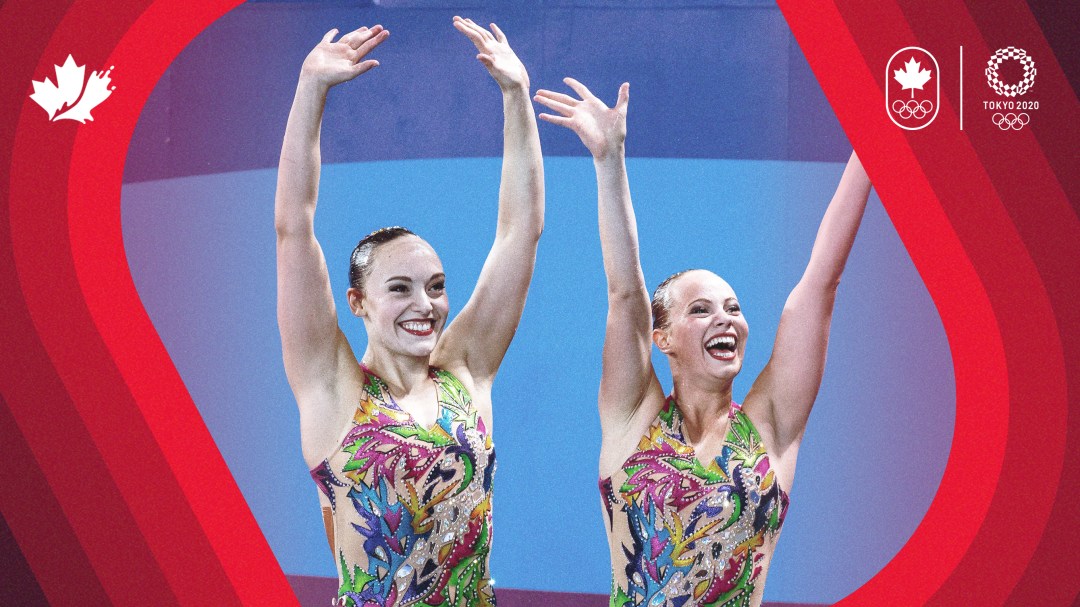 MONTRÉAL (June 2, 2021) – On Wednesday, Canada Artistic Swimming and the Canadian Olympic Committee announced the eight artistic swimmers nominated to compete at the Tokyo 2020 Olympic Games. Canada will be sending an experienced squad to Tokyo, with seven athletes returning from the Lima 2019 Pan American Games roster.

Team Canada qualified for Tokyo 2020 in the Olympic artistic swimming duet and team events by virtue of the gold medal performances at Lima 2019 Pan American Games.

The nomination is especially meaningful for team captain Claudia Holzner, who narrowly missed out on qualifying for the Rio 2016 Olympic Games.

“After nine years with the Senior National Team, missing the Rio Olympics by so little, followed by a global pandemic, I am so proud to say that I am going to be representing Canada at my first Olympic Games in Tokyo this summer,” said Holzner, who was a member of the team who won gold at the TORONTO 2015 Pan American Games, as well as the duet and team who won gold at the Lima 2019 Pan American Games. “As a veteran on the team, I have watched my teammates grow and flourish into the incredible athletes they’ve become. I can’t wait to see what we will show together in the pool in Tokyo!”

Joining Holzner in Tokyo will be Jacqueline Simoneau, the only Olympian in the nominated roster. Simoneau, a four-time Pan American Games champion who competed in the duet event at Rio 2016, is looking forward to the team experience.

“It’s always an honour to represent Canada on the world stage. It’s incredibly special this time around not only because we’re heading towards a unique Olympic Games, but also because we will be sharing this experience together as a team,” said Simoneau. “We have a great mix of athletes on this squad, from our latest addition Rosalie Boissonneault to many who have been on the team for multiple years.”

Due to COVID 19-related restrictions in their training centre at Institut National du Sport du Québec in Montreal, the team was introduced and presented with their official Team Canada jackets in a private ceremony last week.

“Seeing my teammates’ eyes light up when they put on their Team Canada jacket for the first time brings me back to my first Olympic Team Announcement,” added Simoneau. “It was a great memory to share and we will be looking forward to many more in Japan in August!”

Simoneau and Holzner will be paired to compete in the duet event in Tokyo. They have been swimming together since 2017 and have since been working relentlessly to fine tune their chemistry in the water. After not competing since 2019, the pair won gold at the 2021 FINA Artistic Swimming World Series event in Budapest. They are scheduled to compete again at the 2021 FINA World Series Super Final in Barcelona in June. The team will also take part in this event before entering a final training camp that will take them to the Olympic Games in August.

This summer will mark a long-awaited Olympic return to the pool for Canada’s artistic swimming team, who last competed at London 2012, where they placed fourth. Overall, Canada has won eight medals in artistic swimming including three golds, four silver and one bronze. Canada’s most recent medal came at Sydney 2000 in the team event, where they finished in third place.

Artistic Swimming will take place from August 2 to August 7 (Days 10 to 15) at the Tokyo Aquatics Centre.

“Artistic Swimming is one of those sports that is so deceiving; their ability to dynamically and gracefully tell a story is only possible because of the intensity and strength of the whole team,” said Team Canada’s Tokyo 2020 Chef de Mission, Marnie McBean. “I’m so very excited to see our team and duet perform. I’ve been watching Team Canada’s artistic swimmers perform and win medals for as long as I can remember – they are part of my whole Olympic experience.”