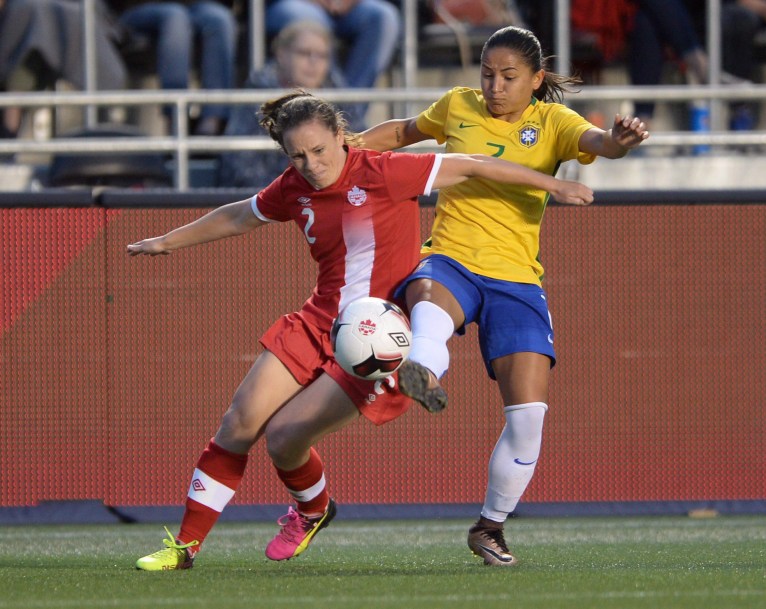 Allysha Chapman was part of Canada’s gold medal-winning team at Tokyo 2020 where she played in four of Canada’s six matches. Chapman had made her Olympic debut at Rio 2016. She suffered a separated shoulder during the quarterfinal, forcing her to miss out on playing in the semifinal. She did get into the bronze medal game in the 59th minute in what she describes as “likely the most painful game of my career” and ended up with the medal around her neck.

Chapman made her debut in the Canadian youth program as a 15-year-old in 2004. She represented the country for the first time four years later at the CONCACAF Women’s U-20 Championship, helping Canada win gold and qualify for the 2008 FIFA U-20 Women’s World Cup.

Chapman’s debut with the senior national team came in 2014. In 2015 she was part of Canada’s second place finish at the Cyprus Cup where she scored her first international goal and made her FIFA Women’s World Cup debut, helping Canada reach the quarterfinals on home soil. Chapman was also on the squad that finished second at the 2016 CONCACAF Olympic qualifier, earning Canada a spot in Rio. She followed that up by helping Canada win gold at the 2016 Algarve Cup.

After helping Canada qualify for the 2019 FIFA Women’s World Cup, she started three of Canada’s four tournament games in France. She also started two of Canada’s games at the CONCACAF Olympic Qualifier where they earned a spot at Tokyo 2020.

A Little More About Allysha

Getting into the Sport: Started playing soccer at age 5 and began competing for Canada at the senior level at age 25… Was a high energy kid and a “prolific goal scorer at age 5” before switching to be a defender… Outside Interests: Graduated from Louisiana State University in 2011 with a Bachelor of Science in Biology… Volunteers as a foster dog parent for a rescue organization… Enjoys going to coffee shops and binge-watching TV shows and taking naps… Odds and Ends: Nickname: Chappy… As a Toronto Maple Leafs fan, admired Tie Domi for being an undersized tough guy, something she can relate to…