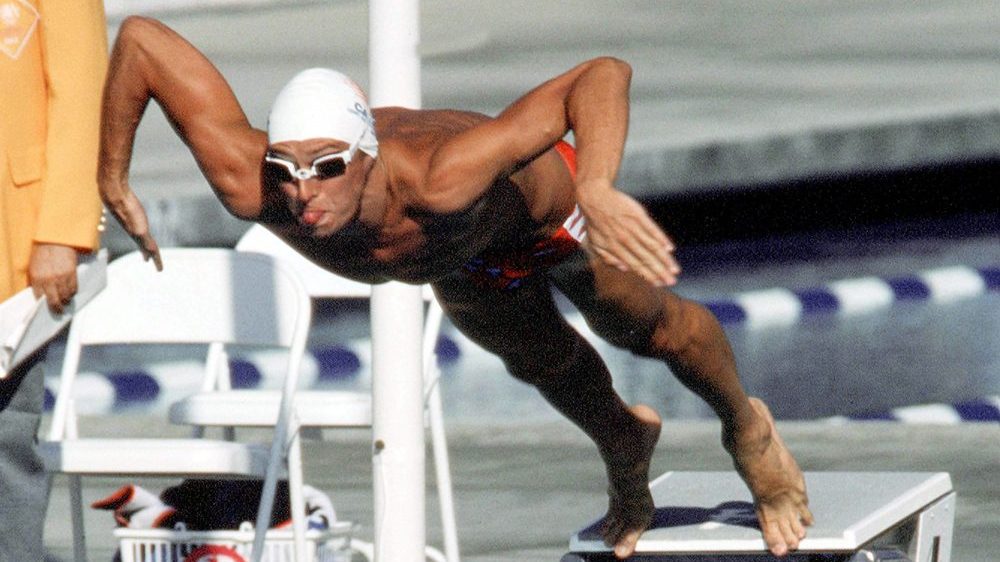 Alex Baumann arrived at Los Angeles 1984 with a maple leaf tattoo over his heart and carrying the grief of losing both his father and older brother in the years prior. Chosen as Canada’s Opening Ceremony flag bearer, Baumann won his first Olympic gold medal in the 400m individual medley in world record time. Post-race, he was in the middle of his third beer in doping control when officials realized he was underage, switching him to soft drinks. Five days later, Baumann won his second gold medal of the Games, the 200m individual medley, setting another world record. Besides George Hodgson’s 1912 gold, only Percy Williams (athletics, 100m, Amsterdam 1928) had captured Olympic gold for Canada before Baumann won his double Olympic titles.

Baumann shared a very close bond with his only coach Dr. Jeno Tihanyi and after Los Angeles 1984, they authored a book titled Swimming with Alex Baumann: A Program for Competitive and Recreational Swimmers. As at Los Angeles 1984, Baumann was named Canada’s flag bearer at the 1982 Commonwealth Games and 1983 World University Games.

Born in Czechoslovakia, Baumann was with his family in New Zealand when they learned Soviet tanks had moved into their homeland. Refusing to return home, the Baumann family headed for Canada in 1969 when he was just five, settling in Sudbury, Ontario. At nine he started swimming, and by 10 Baumann was in the pool before and after school swimming 20 hours a week, describing himself as “pretty precocious”. By 17, Baumann had won the first of his 34 national titles.

Despite retiring from competitive swimming in 1987, Baumann stayed close to the sport. After a broadcasting assignment for CBC at Seoul 1988, and with a degree from Laurentian University, he pursued graduate studies at the University of Queensland in Australia. Baumann became involved in coaching and sports administration, taking on executive roles with Queensland Swimming, Canada’s high performance program Own The Podium, Sport New Zealand, and Swimming Australia. He also continued to swim in masters-level competitions, setting a world record in the 200m individual medley for the 45-49 age group in March 2009. Baumann was successfully treated for two bouts of cancer – testicular in 1999 and prostate in 2011.

In 1988, Baumann married Australian swimmer Tracey Taggart, whom he met at the 1982 Commonwealth Games. Their son Ashton represented Canada in the 200m breaststroke at Rio 2016, while daughter Tabitha swam for Canada at the 2014 Commonwealth Games.

Baumann’s honours include receiving the Order of Canada in 1984 and Order of Ontario in 1988. He was inducted into the Canadian Olympic Hall of Fame in 1985, Canada’s Sports Hall of Fame in 1987, and International Swimming Hall of Fame in 1992. He won the Lionel Conacher Award as Canada’s top male athlete of 1984, was named Swimming World Magazine’s Male Swimmer of the Year in 1981 and 1984. In 2012, Baumann received the Queen Elizabeth II Diamond Jubilee Medal.

Often told he looks like his double Olympic gold medallist father, Ashton Baumann is set to become an Olympian himself...