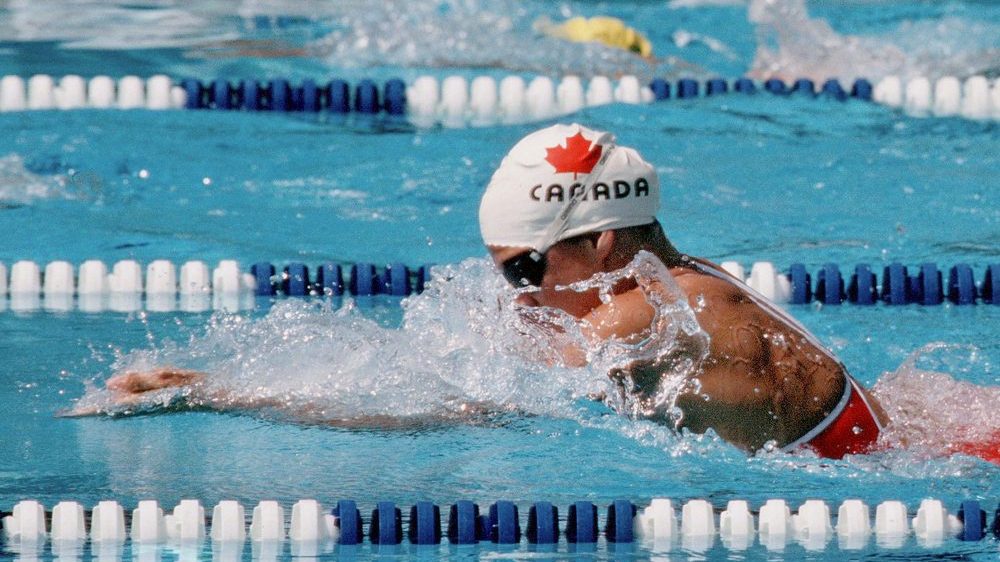 Anne Ottenbrite had a reputation of being accident prone and almost missed being named to the Canadian team for Los Angeles 1984 when she unable to swim at the Olympic Trials, after dislocating her kneecap while showing off a new pair of shoes. Based on previous performances, she was named to the team anyway but even before the Olympics started, she suffered a whiplash injury to her neck after a fender bender in Los Angeles and strained a thigh muscle playing a video game. Despite all these accidents, Ottenbrite won the 200m breaststroke in 2:30.38 seconds, becoming the first Canadian woman to win an Olympic gold in swimming. It came just 30 minutes after Alex Baumann’s victory in the 400m individual medley who had won Canada’s first gold medal in the pool in 72 years. Two days later, Ottenbrite added a silver in the 100m breaststroke and then she ended her Olympic campaign winning a bronze in the 4x100m medley relay.

It was in the family’s backyard pool that Ottenbrite started swimming at the age of three, her father noticing her potential after she started using the whip kick. By 12, she was a member at the Oshawa Swim Club. Ottenbrite attended Henry Street High School in Whitby, studied at the University of Southern California (USC) where she swam for the USC Trojans, transferred to Wilfred Laurier in 1987, and graduated in 1990. After she retired from swimming in 1986 having won eight Canadian titles, Ottenbrite pursued a career in coaching at various clubs and universities in Ontario, including the University of Wisconsin Eau-Claire in the United States. Her consulting company “Gold-Minds,” provided mental skills programs for all levels of athletes. A strong advocate for new pools and infrastructure within her hometown region of Durham, Ottenbrite had a pool named after her in Whitby, Ontario. She was named honorary team captain at the 1994 Commonwealth Games and team manager for the 1995 Pan-Pacific Games in Atlanta. She married hockey coach and scout Marlin Muylaert and had two children, settling in Port Perry, Ontario.