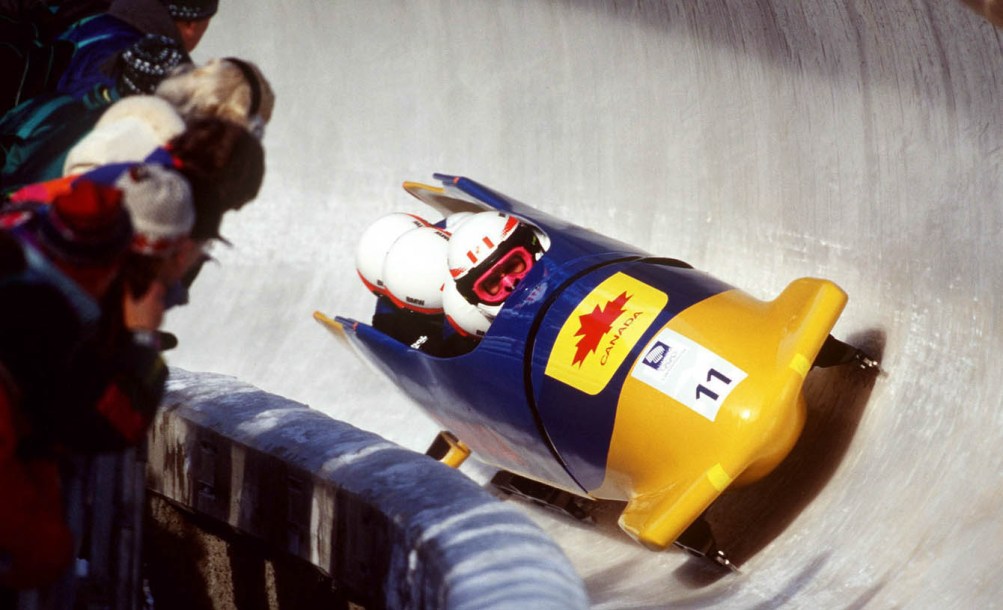 In his Olympic debut at Albertville 1992 and with limited resources MacEachern narrowly missed a bronze medal in the four-man bobsleigh with pilot Chris Lori (11th in two-man). With high hopes and in a new sled with first-time Olympian pilot Pierre Lueders at Lillehammer 1994, MacEachern finished a respectable seventh (two-man) and 12th (four-man). He entered Nagano 1998 with renewed focus having recovered from an ankle chip fracture and torn quadriceps the previous year. After two days of competition, four heats, and 5440m of two-man sledding, brakeman MacEachern and Lueders tied for first with the Italians with an identical cumulative time of 3:37.24. It was the first time in Olympic history that two teams shared the Olympic title, in what was one of the most exciting bobsled competitions ever. It was the first Olympic gold medal in two-man for Canada, and the very first Olympic gold of any sport for Prince Edward Island (PEI). So dominant was MacEachern at the start, he pushed faster than every other nation’s four-man team. His success at Nagano 1998 helped raise the sport’s profile, as well as funding, in Canada.

Throughout his decade long bobsleigh career through the 1990s, MacEachern was one of the fastest big men in the world. In 1995, MacEachern and Lueders became the first team in World Cup history to win all three overall titles – two-man, four-man and combined – in a single season. One of the world’s best brakeman, the Charlottetown native captured a career 28 World Cup medals, five World Cup titles, and a silver medal at the 1996 World Championships.

MacEachern saw early athletic success as a promising soccer player winning the 1979 Atlantic U14 Soccer Championships. An all-around athlete, he twice represented Team PEI at the Canada Games, as a member of the 1985 soccer team and 1989 track team. In 1991, MacEachern switched to bobsleigh and moved to Calgary to the national sliding centre.

After 10 high-speed crashes, numerous impacts and concussions, MacEachern retired in 2000, deciding to leave the dream of competing as a pilot at Salt Lake 2002 behind him and focus on his young family, himself the baby of 11 brothers and sisters. He opened a fitness centre and became a professional strength coach in Charlottetown, working with elite athletes. His work as an analyst with CBC TV Sports took him to World Cup events, Salt Lake 2002 and Torino 2006. MacEachern married Triona Harrop and had three sons. A motivational speaker, whose motto has always been “believe and achieve”, MacEachern was inducted into the PEI Sports Hall of Fame in 2004 and Canadian Olympic Hall of Fame in 2011.