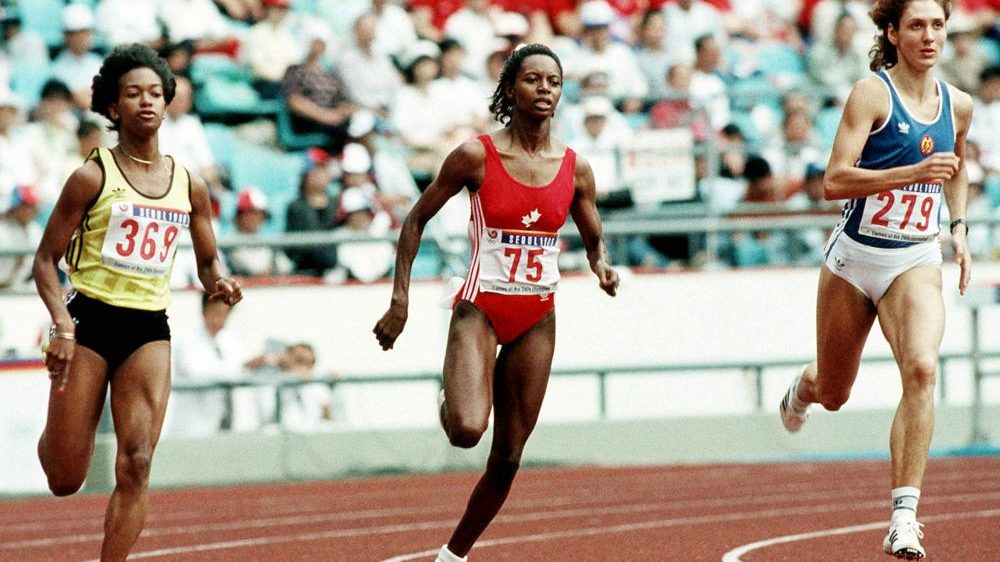 In the 400m at Los Angeles 1984, Canada’s Marita Payne ran conservatively yet fast enough to advance through the 400m heats and in the final, she finished fourth missing the bronze medal by half a second, yet setting a Canadian record of 49.91 seconds which has yet to be broken. Two days later, on August 8, 1984 at 4:20 pm, Payne ran the second and longest leg on the Canadian team in the 4x100m final with teammates Angela Bailey, Angella Taylor and France Gareau, winning the silver medal in a Canadian record time of 42.77 seconds. An hour later at 5:20 pm, she would anchor the Canadian 4x400m relay team with Charmaine Crooks, Molly Killingbeck and Jillian Richardson to a silver medal, her second Olympic silver medal in the space of one hour. At Seoul 1988, the 1984 silver medal winning relay team had reunited and in the 4x400m final, Killingbeck dropped the baton after being bumped on the second leg, the baton flying into the infield and the Canadian team was disqualified. Individually, Payne Wiggins was eliminated in the semi-finals of the 400m.

Payne spent her early childhood in Providence Hill, Christ Church, Barbados and was just a child when her parents moved from Barbados to New York City to go to school and work, leaving her to live with her grandmother in Barbados where she attended St. Bartholomew’s Girls School. At 10, she rejoined her parents in Toronto, later settling in Concord. She started running track while a student at Vaughan Road Collegiate Institute, becoming the 100m and 200m provincial champion in 1979. In 1980, Payne had an athletic scholarship to Florida State University (FSU) graduating in 1984 as a 21-time NCAA All-American, two-time NCAA 400m champion (1982, 1984), and five-time NCAA relay champion.

At FSU, Payne met her husband, basketball player Mitchell Wiggins, who played in the National Basketball Association (NBA) and was a 1982 World Championships silver medalist with Team USA. Marrying in 1986 and settling in Vaughan, Ontario, Payne Wiggins lived a private life and had six children (three boys, three girls) who were all talented athletes. Son Andrew was the first overall draft pick in the 2014 NBA Draft and named NBA Rookie-of-the-Year in 2015; Nick played professionally in Europe, New Zealand, Argentina and Canada; and Mitchell, Jr. in Canada’s National Basketball League (NBLC).

The City of Vaughan named a park in her honour, Marita Payne Park, located in Concord within walking distance of her family’s home. Payne Wiggins was inducted into the Florida State University Hall of Fame in 1991, Canadian Olympic Hall of Fame in 2001 and Athletics Ontario Hall of Fame in 2014.