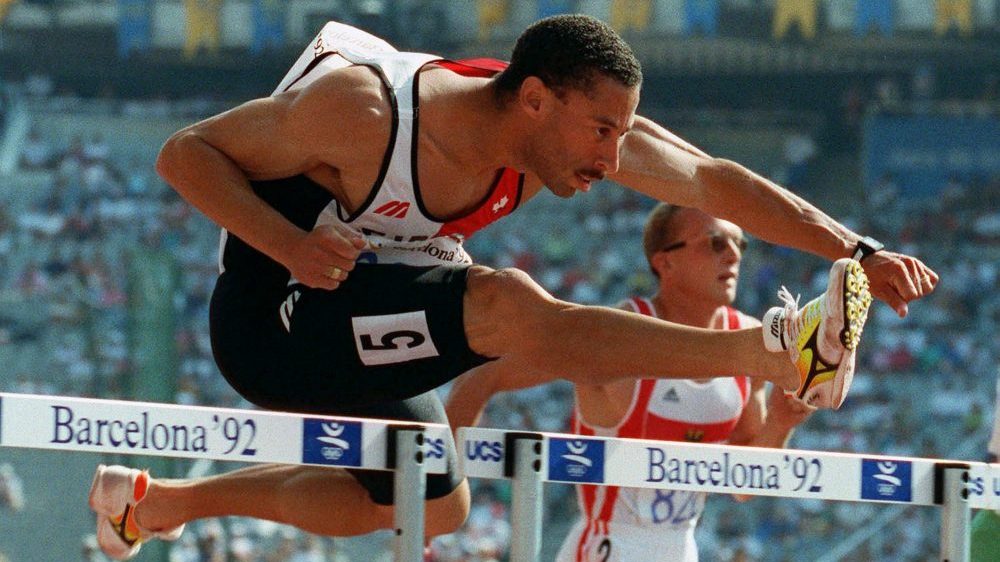 A four-time Olympian, Mark McKoy arrived at his first Olympic Games at Los Angeles 1984 ranked in the top three in the world and missed the podium by 0.05 seconds, finishing fourth. At Seoul 1988, after crashing into a number of hurdles in the final, he finished seventh. He then immediately left Korea in the wake of the Ben Johnson doping scandal, not fulfilling his obligation to the 4x100m relay team, leaving him suspended by his federation. When his suspension lifted, McKoy went back to the track in 1991. He lived and trained in Wales with his closest friend and rival, world junior and Commonwealth Games champion Colin Jackson, agreeing that the two would not meet in competition until the 1992 Olympic Games, which is exactly what happened. Side by side, with Jackson in lane three and McKoy in lane four in the 110m hurdle final at Barcelona 1992, McKoy, the fastest starter in the world, led from start to finish. Despite slamming the last hurdle, McKoy easily won the Olympic title in 13.12 seconds and at age 30, he was the oldest winner in the event’s history. He had put an end to his fourth place finishes, and had captured Canada’s first Olympic gold medal on the track in 64 years. McKoy credited his wife at the time, German runner Yvette Mai, and daughter for the victory by putting his track career into perspective and not chasing the gold medal. Following Barcelona 1992, McKoy moved to Austria becoming a citizen running under their flag at Atlanta 1996.

McKoy represented Canada at five World Championships (three outdoor, two indoor) and two Commonwealth Games. A two-time World Indoor Championships medalist, McKoy won the 60m hurdles title in 1993 in front of a hometown crowd at Toronto’s SkyDome, after winning bronze in 1991. At the Worlds, he twice finished fourth in the 110m hurdles in 1983 and 1991, and was seventh in 1987. He made his international debut at the 1982 Commonwealth Games where he won the 110m hurdles (and a 4x100m silver) and then defended his hurdle title in 1986. McKoy captured his first of eight consecutive 110m hurdles national championships in 1981. In 1986, he set two world indoor records in the 50m and 60m hurdles and Canadian records for the 50m hurdles (1986), 60m (1993) and 110m hurdles (1993).

McKoy was born in Guyana, grew up in England, moved to Canada at 12, went to university in the United States, married a German and became an Austrian citizen in 1994. A talented soccer player, Mark chose track wanting to run at the Olympic Games. The decision to hurdle came as a result of him not wanting to compete directly with high school sprinting friend Tony Sharpe (who also became a member of the national team). After Seoul 1988, he subsequently admitted at the Dubin Inquiry to experimenting with performance enhancing drugs and was later given a two-year suspension, during which time he moved to Austria, and finished out his athletics career competing for his newly-adopted country. After retiring in 1996, McKoy returned to Canada with his wife and children, and became a successful coach, motivational speaker, mentor and fitness advisor, and CEO & President of Gold Medal Enterprises.

Sekou Kaba has wanted to represent Canada since he first arrived in the country and made the standard to compete...