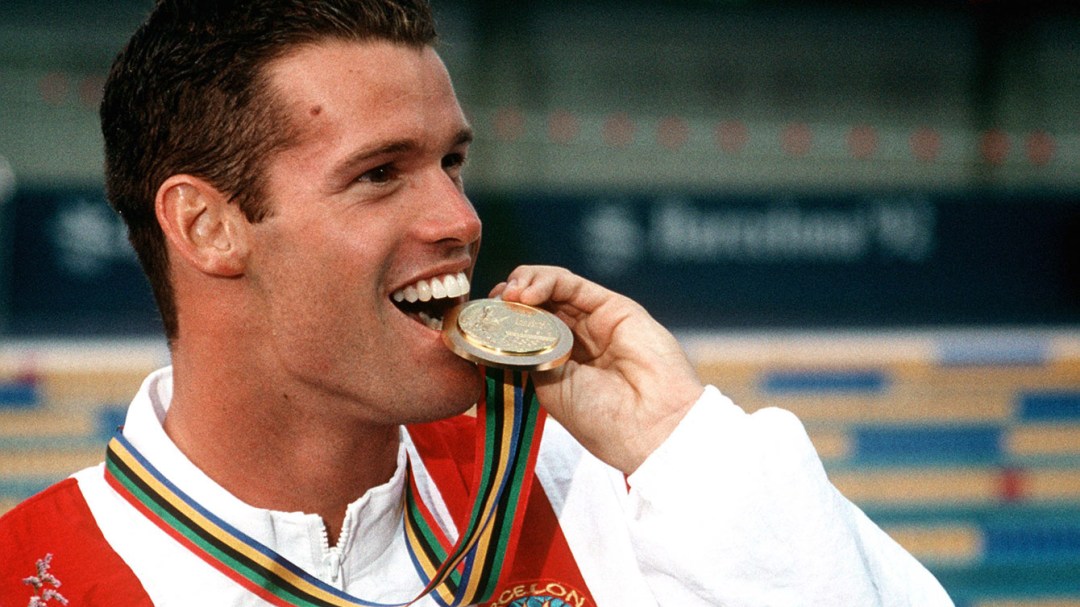 At his first Olympic Games at Seoul 1988, Canada’s Mark Tewksbury won a silver medal as a member of the 4x100m medley relay team with Victor Davis, Tom Ponting and Sandy Goss. He finished fifth in 100m backstroke and reached the semifinals of the 200m backstroke. Entering Barcelona 1992, Tewksbury was ranked fourth in the world and had a personal best time in the 100m backstroke of 55.19 seconds. Coming from behind and touching the wall in an Olympic record time of 53.98 seconds, Tewksbury beat American Jeff Rouse by 0.06 seconds for gold, the same margin of victory Rouse had over him a year prior at the 1991 World Championships. It was Canada’s first medal at Barcelona 1992.

Born in Calgary, Tewksbury’s family moved to Texas when he was young and swimming was a way to escape the Texas heat. Returning to Calgary at age seven, he joined the Cascade Swim Club and starting to train seriously. Like many Canadians of his generation, Tewksbury was inspired by Montréal 1976. He made the national team in 1984 and joined the University of Calgary Dinos swim team while studying. Tewksbury retired from competitive swimming after Barcelona 1992 and pursued a career using his Olympic platform for change.

Tewksbury is recognized for his achievements in sport, public speaking and humanitarianism, becoming a highly sought after motivational speaker. Working with the International Olympic Committee (IOC) as an athlete representative, Tewksbury became a respected trailblazer and prominent advocate for the LGBTQ+ community worldwide after he came out publicly in 1998 as Canada’s first gay Olympian, even addressing the United Nations on the decriminalization of homosexuality. For his active humanitarianism and ethical leadership, Tewksbury was recognized by the University of Western Ontario with an honorary Doctorate of Laws and a honourary degree from the University of Calgary.

Comfortable in front of the camera, Tewksbury served as a broadcast analyst at several Olympic Games, was a regular contributor on CTV’s Canada AM, hosted several television programs, authored several books and appeared on the cover of Time Magazine. In 2012, he was the Chef de Mission of the Canadian Olympic team for the Games in London. Tewksbury won the Lou Marsh Award as the Canadian Athlete of the Year in 1992 and was four times awarded Swimming Canada’s male swimmer of the year. He has been inducted to the Canadian Olympic and Alberta Sports (1993), Canada’s Sports (1995), International Swimming (2000), Canada’s Q and LGBT Human Rights (2009) Halls of Fame.

In 2020, Tewksbury was appointed Companion of the Order of Canada, the highest level of one of our country’s most prestigious honours.