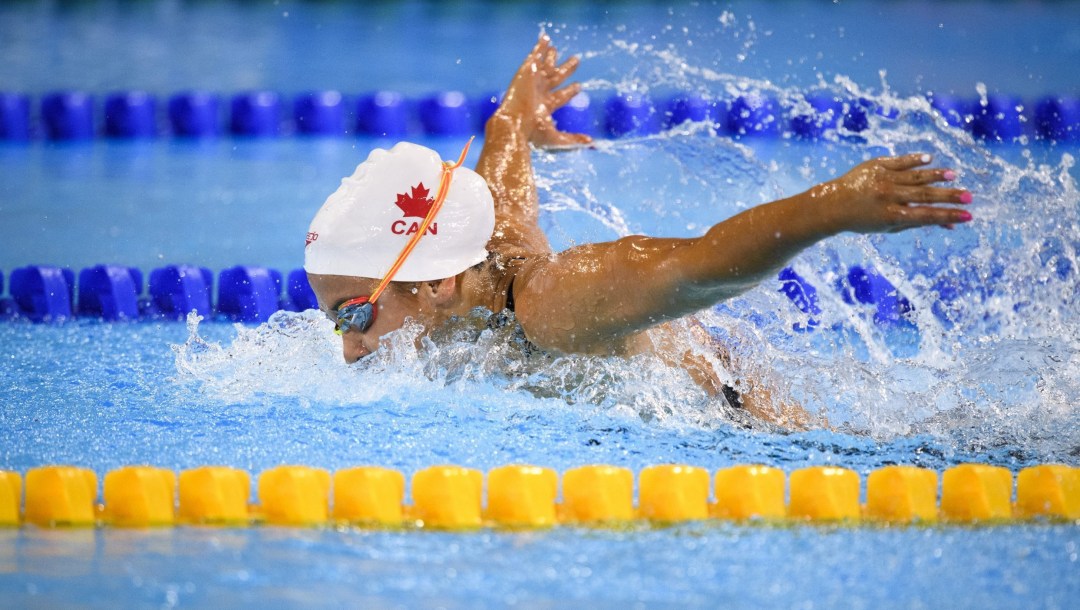 Mary-Sophie Harvey has always wanted to follow in her parents’ footsteps. Both were swimmers who previously competed at the Canadian Olympic Trials. In 2017, Harvey earned the right to represent Canada at her first major senior international meet, qualifying for the FINA World Championships with personal best times in the 200m freestyle and 400m IM at the Canadian Swimming Trials.  She followed up her 2017 breakthrough by being named to the 2018 Commonwealth Games team where she reached the final in the 400m IM.

In 2019, she qualified to Team Canada for the Pan Am Games in Lima after coming back from a severe injury. She had been out of competition for more than eight months due to tendonitis in both shoulders and had at times wondered if she would ever get back to where she was before. In Lima, Harvey competed in five events and reached the podium in four of them, including silver in the 200m butterfly and bronze in the 400m IM. Harvey made her Olympic debut at Tokyo 2020 where she swam the third leg of the 4x200m freestyle relay in the heats. Canada would go on to finish fourth in the final.

Harvey has also represented Canada twice at the FINA World Junior Championships, first in 2013 and then in 2015. In her second appearance, she won a pair of silver medals in the 200m IM and 4x200m freestyle relay to go with a bronze in the 4x100m freestyle relay. In between she competed at the 2014 Australian Age Group Championships, winning seven gold medals (100m and 200m butterfly, 100m and 200m backstroke, 200m and 400m IM, 200m breaststroke). She also reached the podium at the 2014 Junior Pan Pacific Championships.

A Little More About Mary-Sophie

Getting into the Sport: Started swimming at age 6… Outside Interests: Attends Collège de Montréal… Odds and Ends: Collects magnets when travelling…