In her Olympic debut at Tokyo 2020, Maude Charron became just the second Canadian weightlifter to ever win an Olympic gold medal. Charron finished first in the women’s 64kg event after lifting a total weight of 236kg, four more than the silver medallist. She topped the standings in both the snatch (105kg) and clean & jerk (131kg) portions of the competition.

Charron first stood on an international podium in 2016 when she won 63kg bronze at the World University Championships, just over a year after she first started weightlifting. After a bronze medal at the 2017 Pan American Championships, she turned heads in her debut at the IWF World Championships towards the end of 2017 when she placed second in the snatch portion of the competition and fifth overall. Charron had competed with the B group, the day before the A group that had all the top seeds. She sat and watched as five women asked for a snatch weight one kilogram more than she had lifted and all but one of them failed. Her total weight of 224kg was just one less than was lifted by the silver and bronze medallists.

Charron kept her momentum going in 2018, winning 63kg gold at the Commonwealth Games in Gold Coast where she broke the Games record in the clean and jerk, lifting 122kg. She followed up with another gold at the 2018 World University Championships and then finished 10th at the IWF World Championships in the 64kg weight class.

In 2019, Charron finished fourth in the 64kg event at the Pan Am Games in Lima and sixth at the IWF World Championships before capping the year with a gold medal at the IWF Grand Prix in Lima.

In her lone international event in 2020, Charron won silver at the IWF World Cup in Rome. When competition resumed in 2021, she won gold at the Pan American Championships in April, breaking the continental records for the 64kg weight class in snatch (107kg), clean and jerk (133kg) and total (240kg).

A Little More About Maude

Getting into the Sport: Wanted to take up weightlifting when she was 7 after seeing it in a movie but her parents told her she was probably too short… Started doing CrossFit in 2013 after leaving circus school due to injuries… A weightlifting coach attended one of her practices and thought she had potential… Entered her first weightlifting competition in September 2015 and competed at her first nationals five months later… Early on she had no idea how much she was lifting in training because the weights were all in kilos and she only knew pounds from CrossFit… Outside Interests: Studying Human Resources Management at the University of Quebec in Rimouski… Would like to become a police officer… Enjoys reading, doing puzzles, painting… Odds and Ends: Collects flags from countries where she competes… Attended the Quebec Circus School for three years after being a young gymnast… Inspired by Tia Clair Toomey, a Rio 2016 Olympian in weightlifting and CrossFit champion… 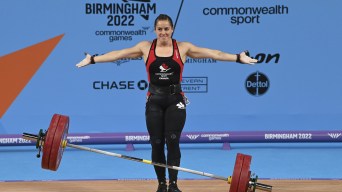