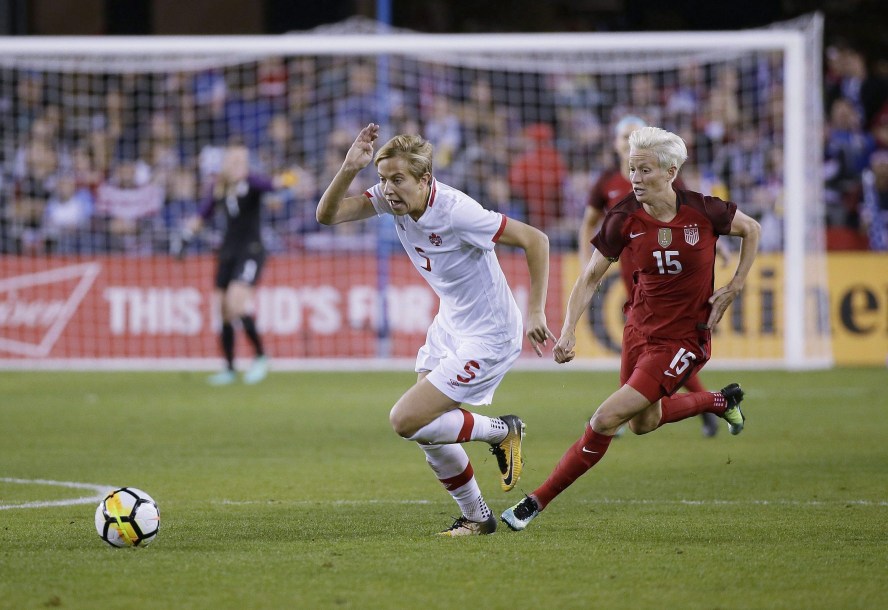 Quinn captured gold with Canada at Tokyo 2020, making history as the first openly transgender, non-binary person to win an Olympic medal. They appeared in all six of Canada’s matches, starting five of them, including the quarterfinal, semifinal, and final.

Quinn made their Olympic debut at Rio 2016 where they helped Canada win the bronze medal. They competed at their first FIFA Women’s World Cup in 2019.

Quinn was 14 years old when they made their debut in the Canadian youth program in 2010 and won a silver medal at the 2012 CONCACAF U-17 Championship. They have represented Canada at two age group FIFA World Cups, the 2012 U-17 and 2014 U-20, making it to the quarterfinals at both events. They played with the senior team at two Cyprus Cups, winning a silver medal in 2015.

Quinn played every minute of every game in Canada’s fourth-place finish at the 2015 Pan Am Games in Toronto. During the 2016 CONCACAF Olympic Qualifier, they scored a hat trick in Canada’s 10-0 win over Guatemala as the team went on to finish second and earn a spot at Rio 2016. They were also part of the Canadian team that won the 2016 Algarve Cup.

Named to the Best XI at the 2018 CONCACAF Championships, they led Canada to a silver medal, securing the country’s spot at the 2019 FIFA Women’s World Cup.

A little more about Quinn

Preferred pronouns: They/Them… Getting into the Sport: Started playing soccer at age 5… They begged to join a house league after their sisters started playing… On their first rep team they asked their coach how old you had to be to play for Canada… Outside Interests: Graduated from Duke University with a degree in biology in 2018… Enjoys hiking and cycling… Odds and Ends: Favourite player growing up was Charmaine Hooper because she was always the hardest working player on the pitch… Nickname: Quinny…