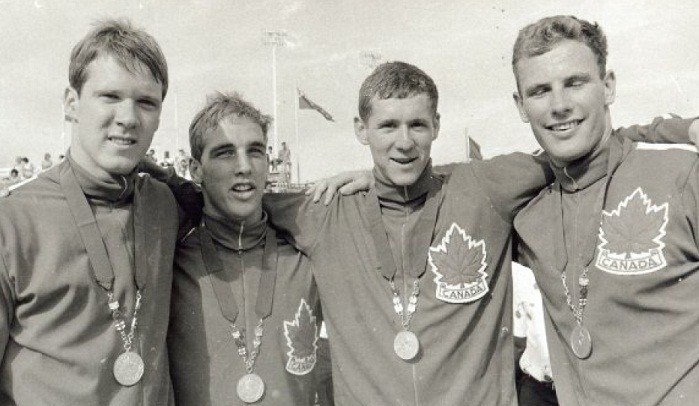 Ralph Hutton, one of Canada’s most consistently successful international swimmers, made his Olympic debut at Tokyo 1964 at the age of 16. He was entered in eight swimming events making only the 200m backstroke final where he finished seventh. Four years later and since Tokyo 1964, the 400m freestyle world record had been broken 10 times by seven different swimmers. The most recent mark being was 4:06.5 and set by Hutton just months before the start of Mexico City 1968. A medal contender going into Mexico, Hutton won the 400m freestyle silver medal and his world record stood for more than a year. He was the first Canadian to win an individual Olympic swimming medal in 48 years. Hutton left Mexico City 1968 having made the finals in all seven of his events finishing just off the podium in fourth twice (200m freestyle, 4x200m freestyle relay), with one fifth (1500m freestyle) and one seventh (4x100m freestyle relay). Despite being entered, he did not start the 200m backstroke. At Munich 1972, Hutton was entered in just three events, making two finals finishing seventh in the 4x200m freestyle, eighth in the 200m freestyle and did not advance in the 400m freestyle. He was the first Canadian swimmer named to three consecutive Olympic teams and the first to make the finals in three straight Games.

Hutton was just 18 at the 1966 British Empire and Commonwealth Games, when he raced 15 times in eight days to win eight medals including medley relay gold, and also broke seven Canadian records. At the 1970 Commonwealth Games, Hutton won four silver medals for a career total of 12 Commonwealth Games medals (one gold, nine silver, two bronze). During the span of his remarkable career, Hutton had won a total of 24 medals in major Games, set 11 national records (his first at age 14), and was the national champion in freestyle, backstroke and individual medley events from 1964-72.

Hutton grew up in Ocean Falls, British Columbia, a little coastal community isolated by mountains and water 500km north of Vancouver. He was coached by fellow BC Sports Hall of Famer, George Gate in a 20 yard paper mill pool at the Ocean Falls Amateur Swim Club. He attended Los Altos High School and graduated with the Class of 1971 from Colorado State University where he had numerous NCAA swimming titles and records. Post swimming, Hutton initially coached and then had a 27-year career from 1974-2000 with the Vancouver Police Department (VPD), dominating the swimming competition at the 1991 World Police and Fire Games where he won eight gold medals. Once retired from the VPD, Hutton settled in Parksville, British Columbia.