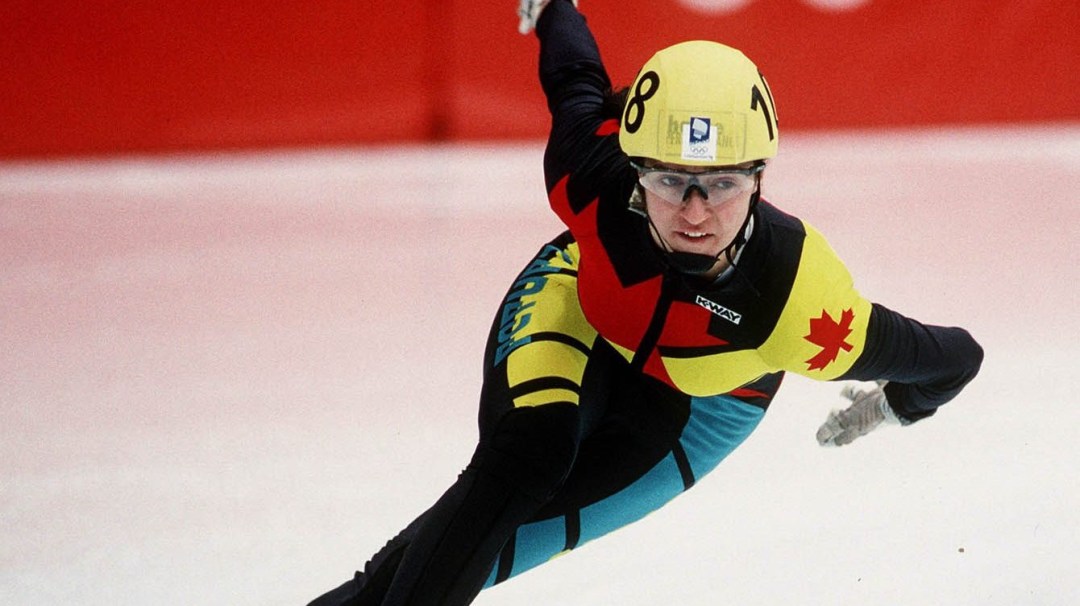 Daigle represented Canada in four Olympic Winter Games (plus one in a demonstration sport) making her debut in long track speed skating at Lake Placid 1980 followed by Sarajevo 1984. Knee operations in 1985 and 1987 forced her to switch from long track to short track and she competed at Calgary 1988, Albertville 1992, and Lillehammer 1994.  At Calgary 1988, short track speed skating was making its introduction as a demonstration sport on the Olympic programme and Daigle won five demonstration sport medals (1500m gold, 1000m silver, 3000m silver, 500m bronze, 3000m relay bronze). When short track speed skating became an official medal event at Albertville 1992, Daigle would find her greatest Olympic success. Besides being chosen as Canada’s flag bearer in the Opening Ceremony, she was now part of a Canadian relay team that arrived in Albertville having won six straight world championships and 10 of the last 11 championships in the 3000m relay. The anticipated duel between Canada and China (the world record holders) never materialized when China crashed out of the event in the semi-final. In the final, Daigle and her teammates held off every challenge the Americans presented, and won the gold medal. Individually, Daigle was a serious contender in the 500m, but finished 18th after a collision with American skater Cathy Turner during the preliminary round.

In her final Olympic appearance at Lillehammer 1994, Daigle, along with Canadian teammate Nathalie Lambert, were the only two skaters from the 1992 Olympic gold medal relay team. The Canadian team arrived in Norway having not lost a major race in six years. In the 3000m relay final, Christine Boudrias crashed into the boards taking the Canadians out of the running for gold. But a Chinese disqualification promoted Daigle and her team to the silver medal. Individually Daigle was 10th in the 500m and was disqualified in the 1000m semi-final, finishing seventh.

After Albertville 1992, Daigle had begun her medical studies, but put them on hold to compete at Lillehammer 1994. When Daigle retired from sport in 1994, she coached short-track Olympian Marc Gagnon for eight years and returned to school to obtain her medical degree from the Universitié de Montréal in 1998, becoming an emergency room doctor.

Daigle’s brilliant career brought many honours and distinctions. In 1979 and 1983, she was awarded the Elaine Tanner Trophy that honours the best junior athlete in Canada. Three times she was named Female Athlete of the Year by the Canadian Speed Skating Association (1988, 1989 and 1991). In 1990, she won the Velma Springstead Trophy presented annually to Canada’s outstanding female athlete, and became a member of Canadian Olympic Hall of Fame in 1991. In 2006 a statue depicting Daigle in a speed skating pose was erected in her honour in her hometown of Sherbrooke, which inducted her into their Hall of Fame in 2015.