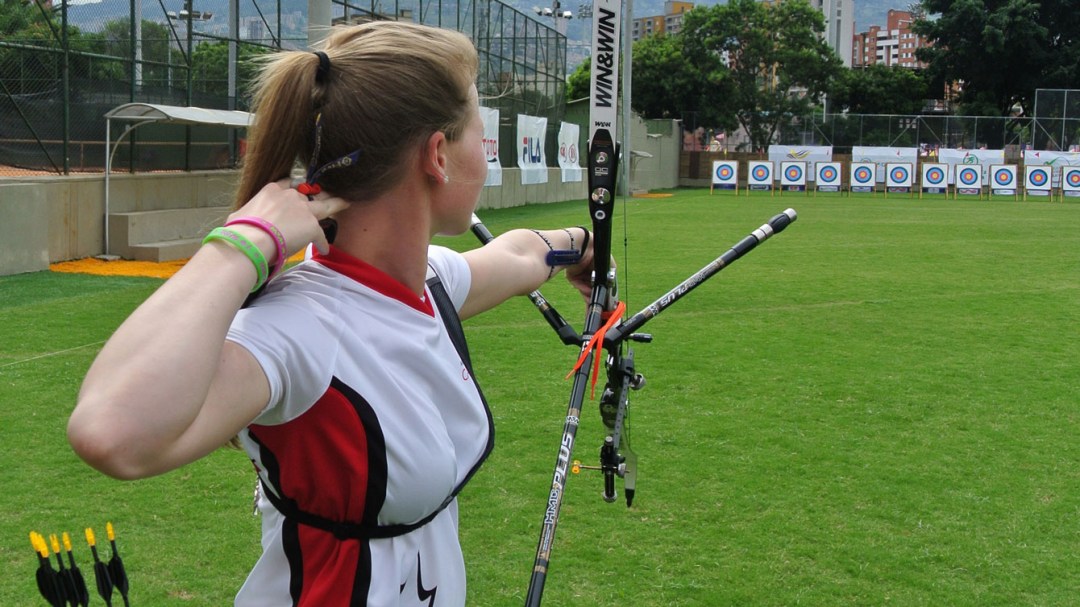 Virginie Chénier began training for competition just two weeks after she first started shooting. She made her international debut as a cadet at the 2008 World Youth Championships, having just turned 14. She competed at two more world championships as a cadet before moving up to the junior ranks in 2012. At that year’s world junior indoor championships, she finished ninth individually and just missed the podium in the team event. In 2013 she competed at both the senior and junior world championships. Chénier achieved a career highlight when she finished fourth in the junior individual recurve event at the 2014 Pan American Championships. Chénier got a taste of multi-sport competition at the 2011 Canada Games where she was a double medallist, taking individual gold and team bronze. Competing at her first senior-level multi-sport games at Toronto 2015, Chénier.finished 18th in the individual competition and helped Canada to a sixth–place finish in the team event. Chénier clinched a spot for Canada at the Lima 2019 Pan Am Games with a gold medal at the Pan American Qualification Tournament in Medellin, Colombia in August 2018.

A LITTLE MORE ABOUT VIRGINE

Getting into the Sport: Started in archery at age 11… An artistic gymnast from 1999 to 2005, she was looking for another sport by attending different open houses… An archery coach asked her club about any gymnasts who had recently stopped because their back muscles are well-developed for archery… The coach contacted her so she gave it a try and loved it… Outside Interests: Graduated from McGill University with a Bachelor in Geography in 2017… Enjoys doing hot yoga because it is a good physical and calming exercise… Enjoys skiing in the off-season… Odds and Ends: Nicknames: V, Nini… Inspired by American Olympic gymnast Shawn Johnson… Wears two elastics on her right wrist when she shoots… Keeps her old plane tickets, athlete numbers and tournament programs from her competitions… Favourite quote: “I wanted to prove a real champion smiles no matter what.” – Sandra Izbasa (Romanian gymnast)…