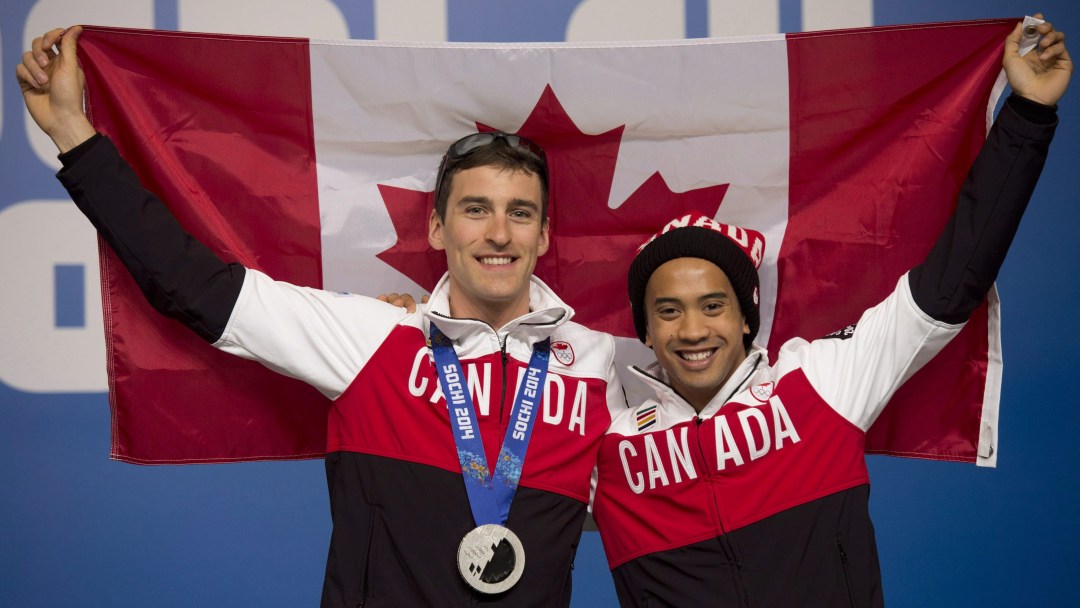 With athletes going head-to-head on an international stage, it’s easy to get caught up in the competitive nature of the Olympic Games and medal counts, losing sight of what really matters.

But time after time, Olympians have shown us that there’s more to sport than just the game. Being a good sport, team player, and showing compassion for others can mean so much more. Through athleticism, selflessness and sportsmanship, these athletes and coaches have reminded us what the Games should really be about.

While most examples of sportsmanship aren’t a matter of life or death, there is at least one exception to that rule.

Canadian sailor Lawrence Lemieux helped define the word sportsmanship when he abandoned his race mid-competition to help Singaporeans Joseph Chan and Shaw Her Siew, whose 470 class boat had capsized under 35-knot winds, leaving the pair in danger of being carried out to sea. Lemieux, who was on course to finish second in that day’s Finn class race, threw away his medal chances to help them out. He battled through harsh currents and forceful winds to ensure Chan and Siew’s safety.

In many sports, the equipment is as vital to success as the training the athlete undertaken. But when that equipment fails, an athlete can only hope to have the help that these received. 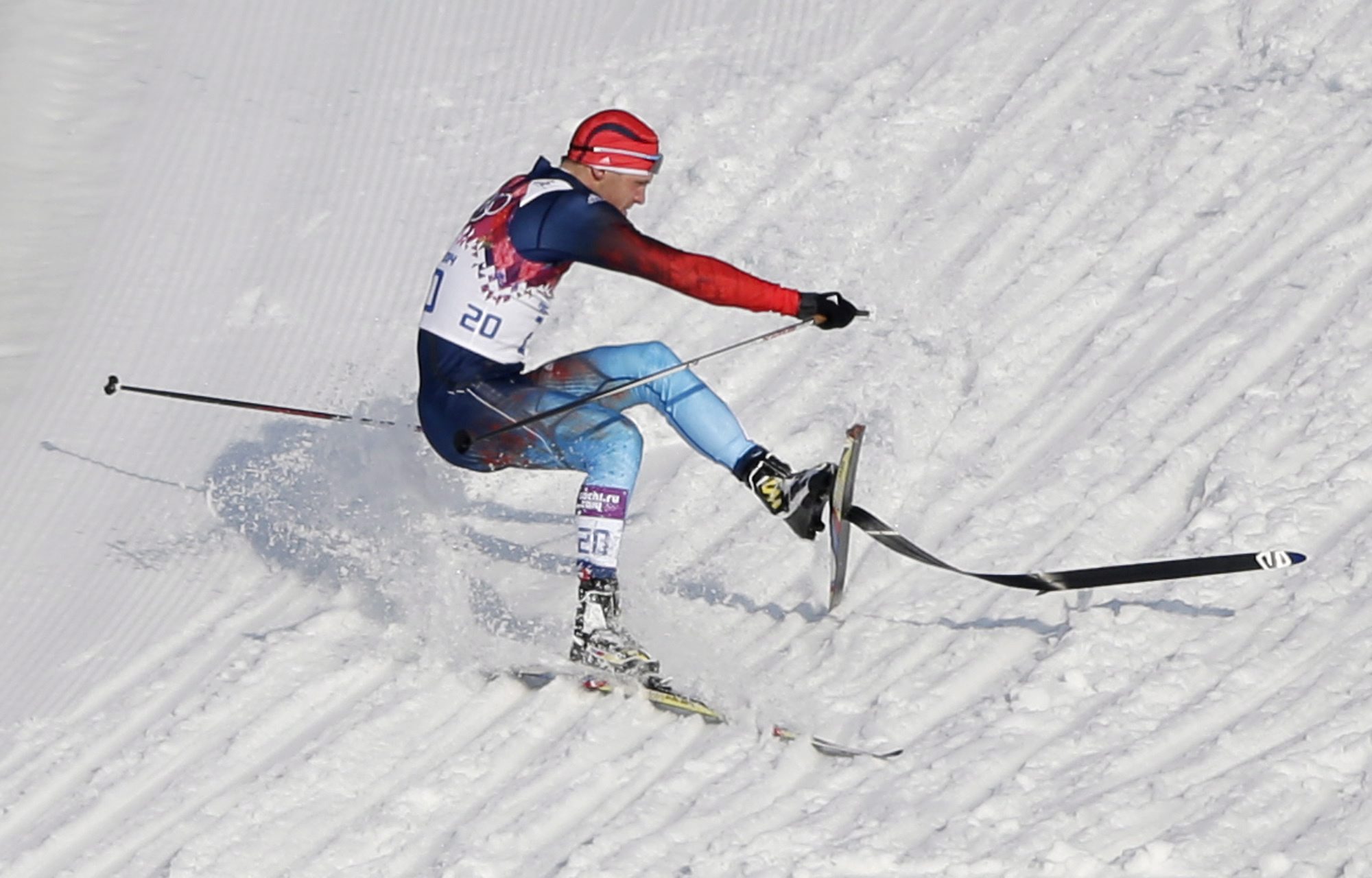 Russia’s Anton Gafarov falls with a broken ski during his men’s semifinal of the cross-country sprint at the 2014 Winter Olympics, Tuesday, Feb. 11, 2014, in Krasnaya Polyana, Russia. (AP Photo/Matthias Schrader)

Justin Wadsworth was the head coach of Canada’s cross-country ski team during Sochi 2014. While watching the men’s sprint semifinals, Wadsworth saw Russian Anton Gafarov fall multiple times on a broken ski. The Canadian coach was on the sidelines with a spare ski for Alex Harvey, who had disappointingly not advanced. Seeing the Russian struggle to continue, he immediately ran onto the course and knelt down to replace the broken ski. Without this act of kindness, Garafov likely wouldn’t have made it to the finish line with the dignity that he did.

Wadsworth certainly wasn’t the first coach to display great sportsmanship towards his opponent. Flashback to Turin 2006, where Norwegian coach Bjørnar Håkensmoen’s Olympic spirit allowed Canadian Sara Renner to claim a silver medal in cross-country skiing team sprint with Beckie Scott. After an opponent stepped on Renner’s ski pole and broke it, Håkensmoen quickly handed her a new one. It may have been a bit too long for her, but it allowed Renner to finish her leg of the race. The Canadian duo won silver, while Norway’s cross-country team just missed the podium in fourth place, meaning that Håkensmoen’s sportsmanship may have cost his own team a medal.

Italian bobsledder Eugenio Monti was the first recipient of the Pierre de Coubertin medal for sportsmanship and rightfully so. During the 1964 Olympic Winter Games, he helped not one, but two opposing teams in need. His first act of sportsmanship came in the two-man event when British bobsledders Tony Nash and Robin Dixon suffered a broken axel bolt in their first run. Monti, the most dominant pilot of the era, selflessly lent them one of his spare bolts. The Brits ended up winning the gold medal, while Monti and his partner came in third. If that wasn’t enough, during the four-man event that followed, the Canadian team piloted by Vic Emery suffered damage to their rear axel. Monti offered up his own crew of mechanics to fix it for them. In a similar fate, Canada went on to win gold while the Italian team took home another bronze.

Sometimes, it’s the body that fails an athlete at the most inopportune time. But if they’re lucky, a helping hand is there to get them to the finish. 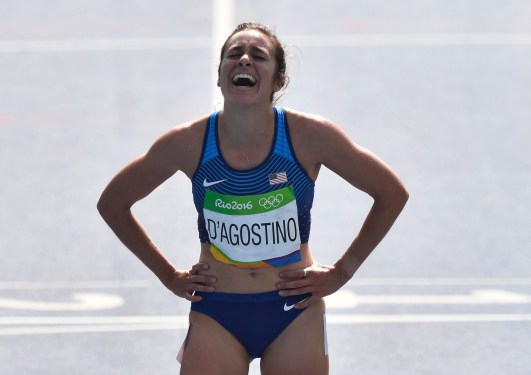 United States’ Abbey D’Agostino after competing in a women’s 5000-meter heat during the athletics competitions of the 2016 Summer Olympics at the Olympic stadium in Rio de Janeiro, Brazil, Tuesday, Aug. 16, 2016. (AP Photo/Martin Meissner) 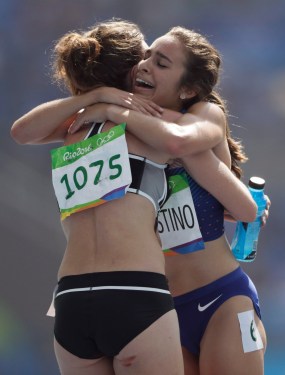 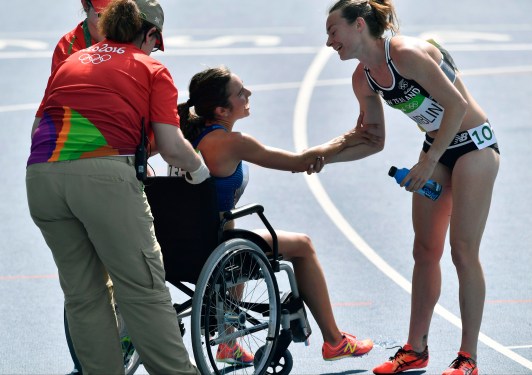 New Zealand’s Nikki Hamblin greets United States’ Abbey D’Agostino, left, as she is helped from the track after competing in a women’s 5000-meter heat during the athletics competitions of the 2016 Summer Olympics at the Olympic stadium in Rio de Janeiro, Brazil, Tuesday, Aug. 16, 2016. (AP Photo/Martin Meissner)

One of Rio’s most memorable moments didn’t come from an outstanding medal performance, but from American Abbey D’Agostino and New Zealand’s Nikki Hamblin in the women’s 5000m heats. The competitors were four and a half laps from the finish when Hamblin tripped and fell to the ground, causing D’Agostino to stumble over her and onto the racetrack as well. Instead of sprinting off after she got up, D’Agostino went over and lent Hamblin a hand, encouraging her to get up and finish. The pair headed down the track until D’Agostino fell for a second time, due to an injury sustained in the mix-up. Hamblin returned the favour – giving away any chance she had at advancing to the final – to help D’Agostino get back on her feet. After finishing, they embraced in a hug. The unlikely duo proved the importance of sportsmanship and received the International Fair Play Committee Award for their actions.

British sprinter Derek Redmond and his father Jim showed the world at the 1992 Summer Games that finishing something is more important than the end result. In the men’s 400m semifinal, Redmond was heavily favoured to win gold – that is until he tore his hamstring during the race, fell to the ground and lost any chance of reaching the podium. But, instead of heading out of the race on a stretcher without finishing, he picked himself up and began limping down the track  in obvious pain, Redmond’s father Jim left the sidelines and ran onto the track to lend himself as a crutch to his son. Together, the pair crossed the finish line with a crowd of people cheering them on.

Or perhaps that helping hand comes in the form of great advice. 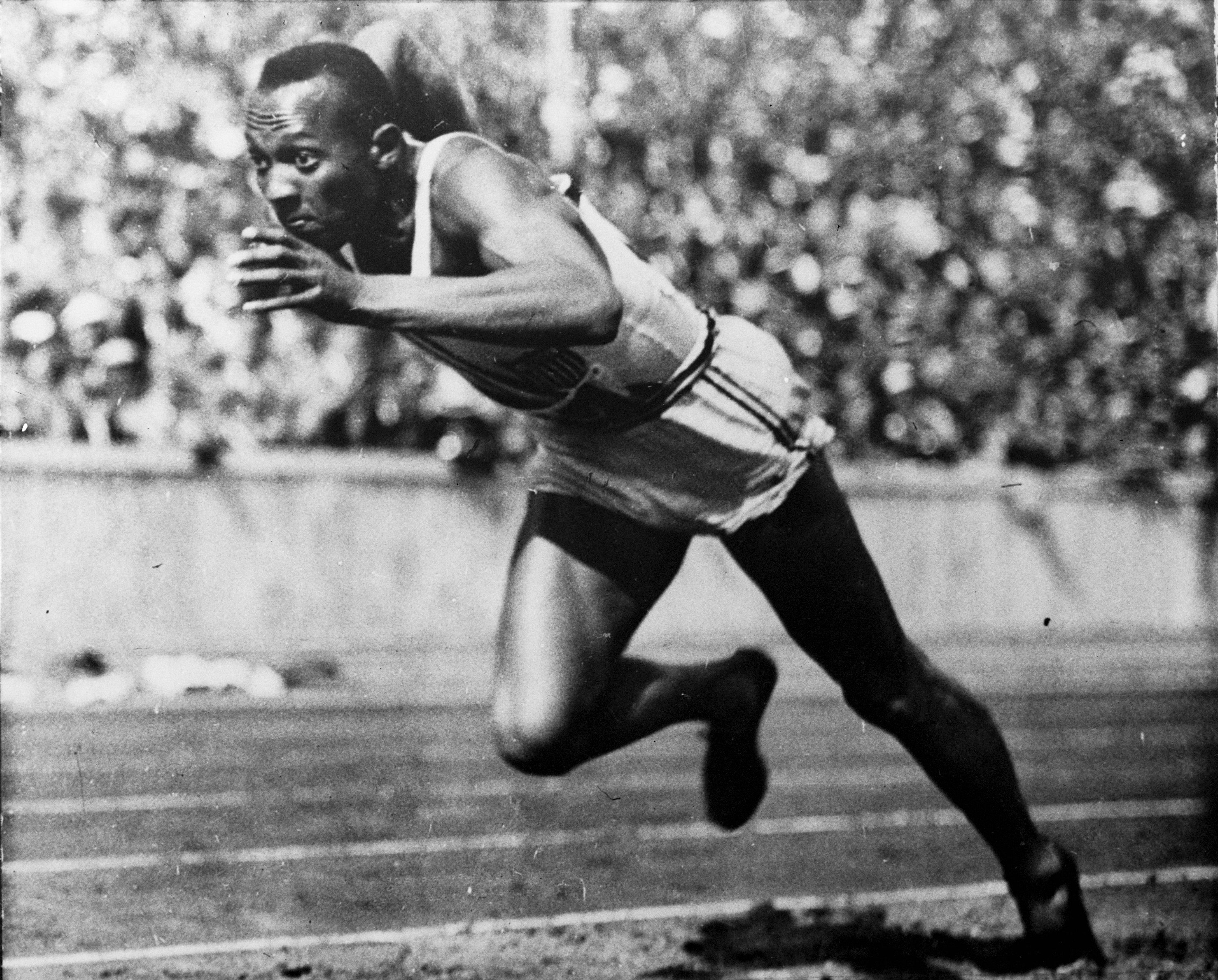 FILE – This 1936 file photo shows Jesse Owens in action in a 200-meter preliminary heat at the 1936 Summer Olympic Games in Berlin. Hop on the Underground at “Jesse Owens” station. After one stop change at “Carl Lewis.” And then ride the Tube all the way to “Michael Phelps.” That, sports fans, will get you from central London right to the Olympic Stadium. (AP Photo/File)

American Jesse Owens’ incredible four gold medal performance at Berlin 1936 might not have happened without the wise words of German rival Luz Long in men’s long jump. Owen’s first two attempts at qualifying for the final resulted in fouls, leaving his dreams of reaching the podium hanging by a thread. Before his third jump, Long approached him and suggested laying a towel in front of the takeoff board and jumping from a few inches back to avoid fouling out. Owens took the advice and succeeded, eventually going on to win gold, while Long stood behind him in second place. In an era defined by political and cultural tensions, Long took a huge risk in offering Owens a few pointers, but reminds us that doing the right thing should always be our number one priority.

It’s also important to remember the saying that there’s no “I” in “team”. 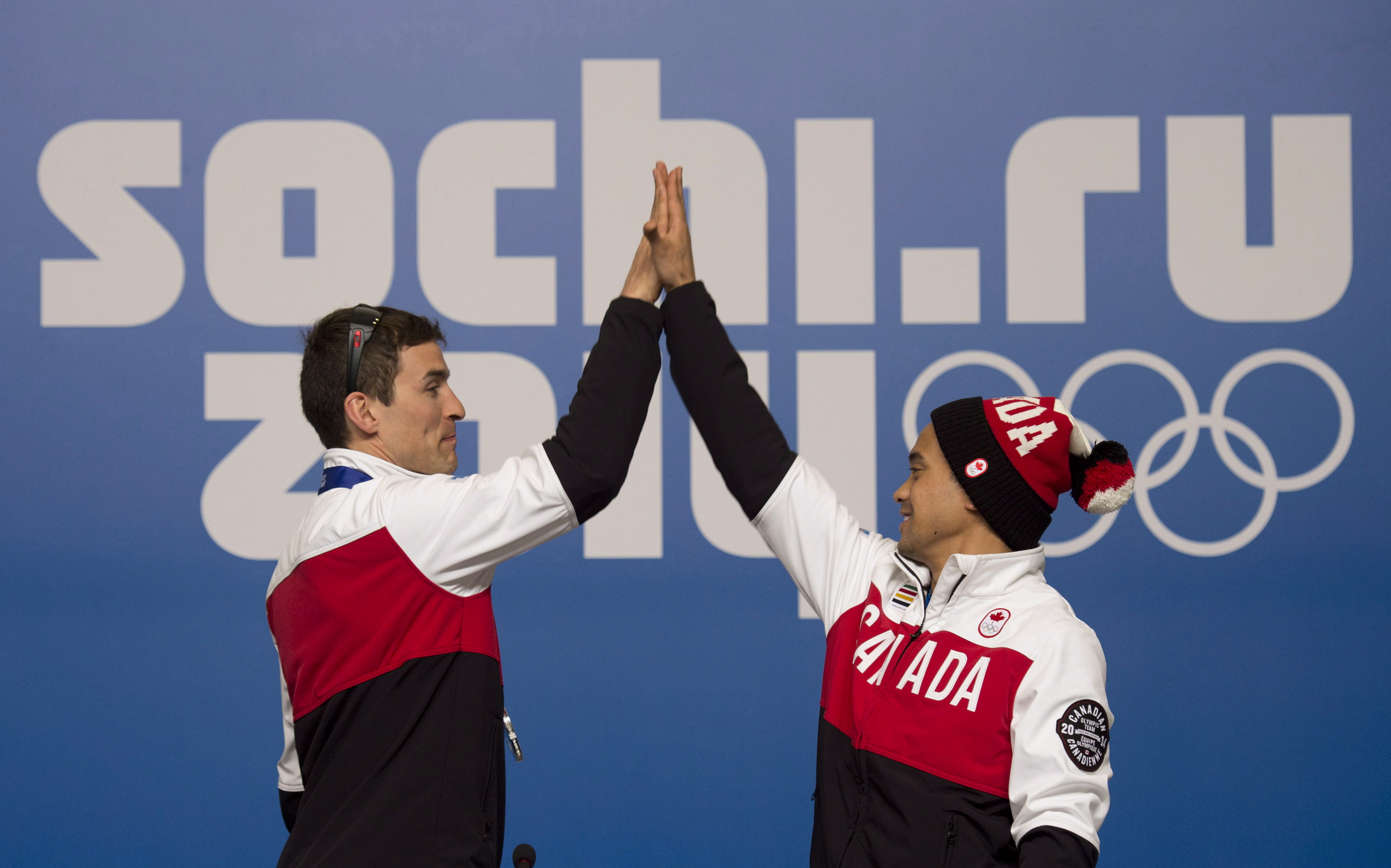 At Sochi 2014, speed skater Gilmore Junio made the surprising decision to withdraw from the 1000m to give his spot to fellow Canadian Denny Morrison. Why did he do it? Because Junio thought Morrison offered a better chance of earning a medal for Canada. During the national trials, Morrison had been just 50m away from qualifying for the 1000m, but clipped a skate and fell. He was given another shot, but just didn’t have the same energy. The 1000m was a specialty of two-time world champion Morrison while Junio was better at the shorter 500m. For the good of the country, Junio recognized this and selflessly put his entire nation ahead of himself when he gave away his spot. This action was something that paid off as Morrison went on to win silver.

Canadian race walker Evan Dunfee didn’t make a fuss after a back and forth fight for bronze with Japan’s Hirooki Arai. Arai and Dunfee were neck-and-neck in the 50km race walk when Arai bumped into Dunfee causing him to wobble and lose his rhythm. That allowed Arai to move ahead into third place. After an appeal and review, Arai was disqualified, moving Dunfee into bronze medal position. But a counter-appeal by the Japanese returned Arai to third place. It was then left to Dunfee as to whether or not he wanted to further appeal to the Court of Arbitration for Sport. Ultimately, he decided not to, Instead, holding his head up high and accepting the fourth place spot like a champ, proud of the effort he had made.

And then there are those times that even if the results book can’t be changed, the medal ownership can. 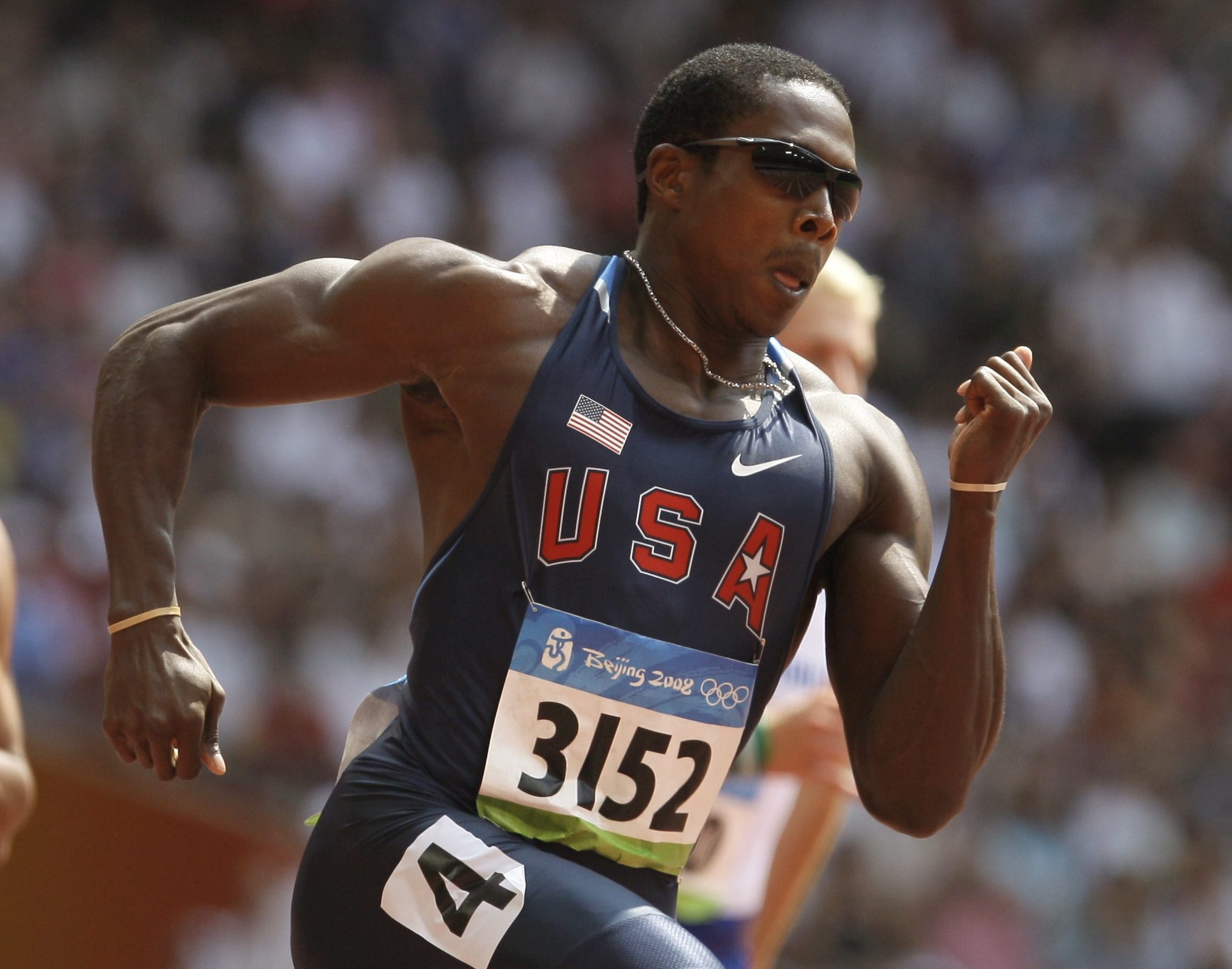 FILE – In this Aug. 18, 2008, file photo, Shawn Crawford of the United States competes in a heat of the men’s 200-meter race during the athletics competitions in the National Stadium at the Beijing 2008 Olympics in Beijing. In the finals Crawford finished fourth, only to move up two spots when Netherlands Antilles sprinter Churandy Martina and American Wallace Spearmon were disqualified for running outside their lanes. But each time Crawford looked at his medal, he felt stabs of guilt. So he gave it back to Martina, who in his opinion beat him fair and square, even though the rules said differently(AP Photo/David J. Phillip, File)

The Beijing 2008 men’s 200m final saw Usain Bolt set a world record of 19.30 seconds to win gold and take all the headlines.  But what happened behind him was as equally interesting. Churandy Martina of Netherlands Antilles crossed the line second ahead of American Wallace Spearmon in third. However, upon review, both Martina and Spearmon were disqualified for stepping out of their lanes. This moved Americans Shawn Crawford and Walter Dix into second and third place. This didn’t sit well with Crawford, who had jumped from fourth to the silver medal. So, following the Games, Crawford made the decision to send Churandy his Olympic silver medal with a note that said, “Churandy I know this can’t replace the moment, but I want you to have this because I believe it’s rightfully yours!”

Japanese pole vaulters Shuhei Nishida and Sueo Oe took the scoring charts into their own hands when they made the unprecedented decision to cut their 1936 Olympic medals in half and solder them together to make a mixed medal of bronze and silver. But why? The pair had been in a three-way jump-off for second and third with American Bill Sefton. But after Sefton was eliminated, the jump-off ended, reportedly because Japanese officials stepped in and chose to give Nishida the silver and Oe the bronze. Among the possible reasons, Nishida was older and had cleared 4.25m on his first jump while Oe had missed that height on his first attempt. But that reasoning apparently wasn’t good enough for the two competitors. When they returned to Japan, they cut the medals in half to create the Medal of Eternal Friendship.