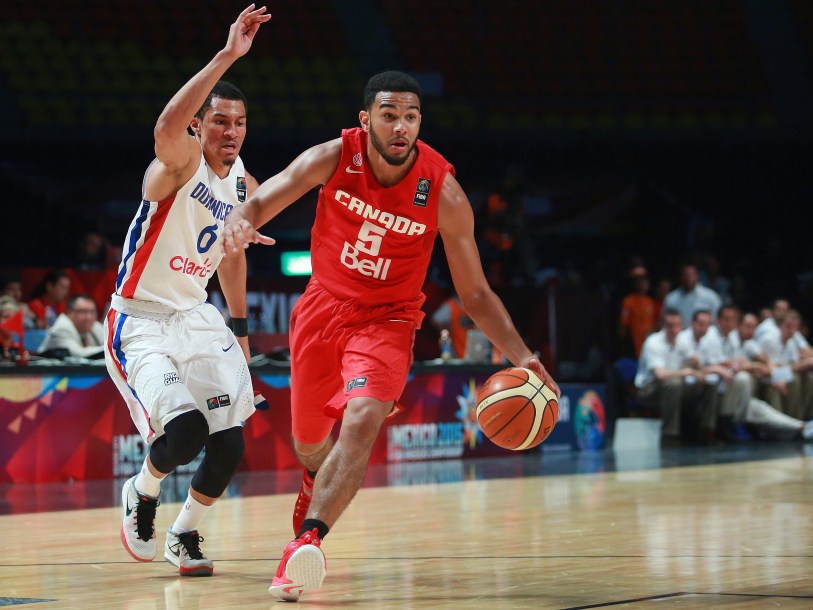 With the exciting announcement that Canada is hosting one of four FIBA World Olympic Qualifying Tournaments next June, the Canadian men’s basketball team will look to qualify for their first Olympic basketball tournament since Sydney 2000.

So what could the news mean for Team Canada, and what must they do to secure a spot at Tokyo 2020?

What happened at the 2019 FIBA World Cup?

First, let’s go over some background.

Canada had their first chance to qualify for the Olympics at the 2019 FIBA World Cup. The top seven teams in the 32-team tournament, including two from the Americas, earned berths at Tokyo 2020. Unfortunately for Canada, things didn’t go quite according to plan. 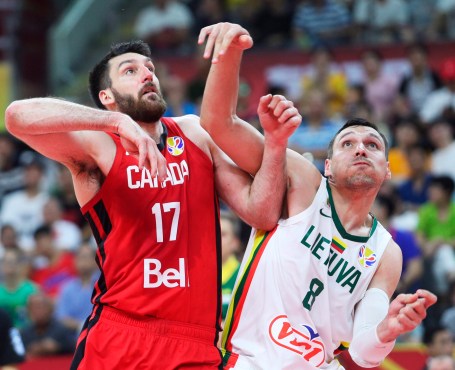 Despite a strong lineup with NBA talent in Khem Birch and Cory Joseph, Team Canada finished with a 2-3 record – not enough to earn a top two finish in their region, or an Olympic berth. It was Argentina (7-1) and the United States (6-2) emerging from the Americas to earn spots at Tokyo. From the other groups, Spain, France, Australia, Nigeria, and Iran all earned Olympic qualification, while Japan is automatically qualified as host of the Olympics.

On the bright side though, Canada did finish well enough to qualify for one of four FIBA World Olympic Qualifying Tournaments, now taking place in June 2021, marking their final chance to earn a berth at Tokyo 2020. 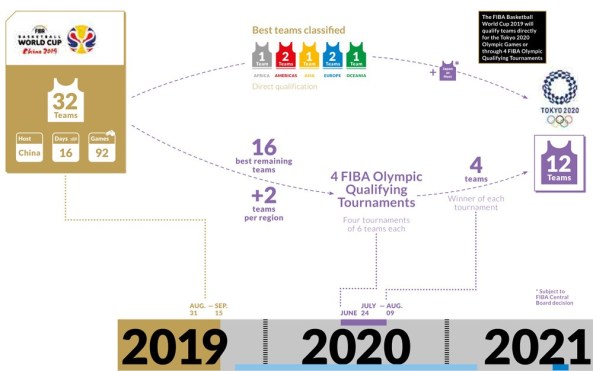 What are the FIBA World Olympic Qualifying Tournaments?

There will be four Olympic Qualifying Tournaments taking place from June 22 to July 4, 2021 in order to determine the final four nations that will participate in the 12-team Olympic basketball tournament.

24 nations in total will compete across the four tournaments, split up into groups of six. The participants include the top 16 non-qualifying teams from the 2019 World Cup plus an additional eight teams, made up of the top two remaining teams from each of Africa, Asia, Europe, and the Americas. The winning nation from each tournament will qualify for the Olympics.

The FIBA Executive Committee decided on the four hosts in November 2019 and awarded one of the tournaments to Victoria. Croatia (Split), Lithuania (Kaunas), and Serbia (Belgrade) will host the other three tournaments.

Where is the Olympic Qualifying Tournament being held?

Games will be played at the Save-On-Foods Memorial Centre in Victoria.

It’s impossible to make any definitive statements, but there are plenty of potential positives to Victoria hosting an Olympic Qualifying Tournament. 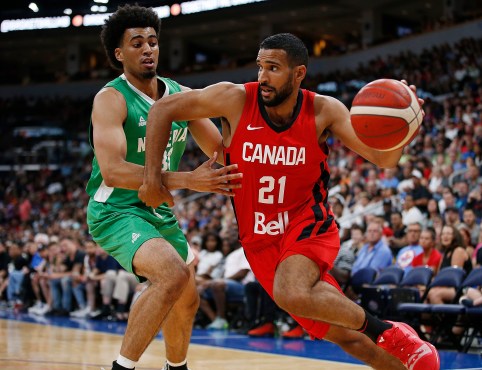 Canada’s Thomas Scrubb (21) works his way around Nigeria’s Jordan Nwora (33) during the first half of their exhibition game in Winnipeg, Friday, August 9, 2019. THE CANADIAN PRESS/John Woods

Originally, the biggest potential upside was that both the timing and location could entice Canadian NBA players to participate in the tournament, which would obviously bode well for Team Canada’s chances. The tournament was to be held at the end of June 2020 following the conclusion of the NBA season, and being in Victoria negated any issues related to travel or time zones.

It was not a stretch to suggest that this could have been the men’s best chance to qualify for Olympic basketball since Sydney 2000.

However, due to the COVID-19 pandemic, the 2020-21 NBA season is now tentatively scheduled to end by July 22, 2021, affecting which Canadian players could be available to play in the tournament.

How can I watch Canada play in the Olympic Qualifying Tournament?

Ticket information and broadcast details have not yet been announced so stay tuned.

Who will Canada face at the Qualifying Tournament?

With each tournament split into two groups, 21st-ranked Canada was drawn into Group A along with No. 7 Greece and No. 27 China. Group B of their tournament consists of Uruguay, Czech Republic, and Turkey.

Here's the schedule for the OQTs. Canada is A3. pic.twitter.com/bXO5hXFRTD

Who is playing for Team Canada?

With the tournament still months away, rosters have not yet been announced. However, we do know that before the COVID-19 pandemic, several NBA stars had already committed to playing in the Qualifying Tournament.

Has Canada played at past Qualifying Tournaments?

Team Canada has participated in several past Olympic Qualifying Tournaments. 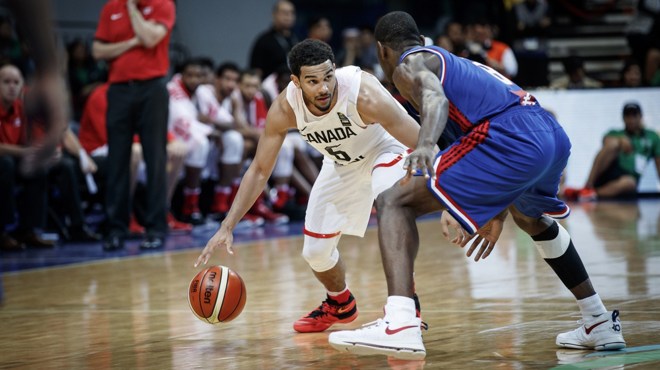 Cory Joseph had a team high 20 points in Canada’s loss to France in the final of the Olympic qualification tournament on July 10, 2016 in Manila. (Photo: FIBA)

In 2016 they played at the Qualifying Tournament in Manila, Philippines. They were drawn into Group A with Turkey and Senegal, while Group B was made up of France, New Zealand, and the Philippines. Canada won both of their group stage games, qualifying for the semi-final where they beat New Zealand 78-72. With a qualification spot for the Rio 2016 Olympics on the line, Canada lost to France in the final by a score of 83-74.

The last time the Canadian men’s basketball team qualified for the Olympics was Sydney 2000.

Legendary NBA player and Hall of Famer Steve Nash led the team to the top of Pool B with an upset win over Yugoslavia, but they eventually fell 68-63 to France in the quarterfinals. 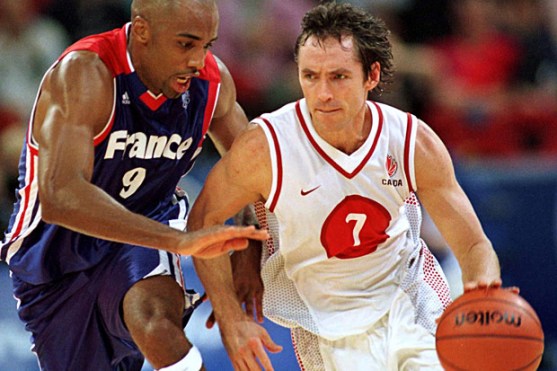 Has Canada ever won an Olympic medal in basketball?

Canada has earned one medal in Olympic basketball as the men’s team won silver at the 1936 Olympic Games in Berlin.

Is Canada sending a 3×3 basketball team to Tokyo?

Canada’s 3×3 men’s basketball team is still in contention for a spot at Tokyo. They will compete in a qualifying tournament, May 26-30, 2021 in Graz, Austria, where the final 10 teams will be determined for the Olympic tournament.

Canada was drawn into a group with the Netherlands, Croatia, Latvia, and host Austria as they seek to qualify for the first-ever 3×3 basketball competition at the Olympics.