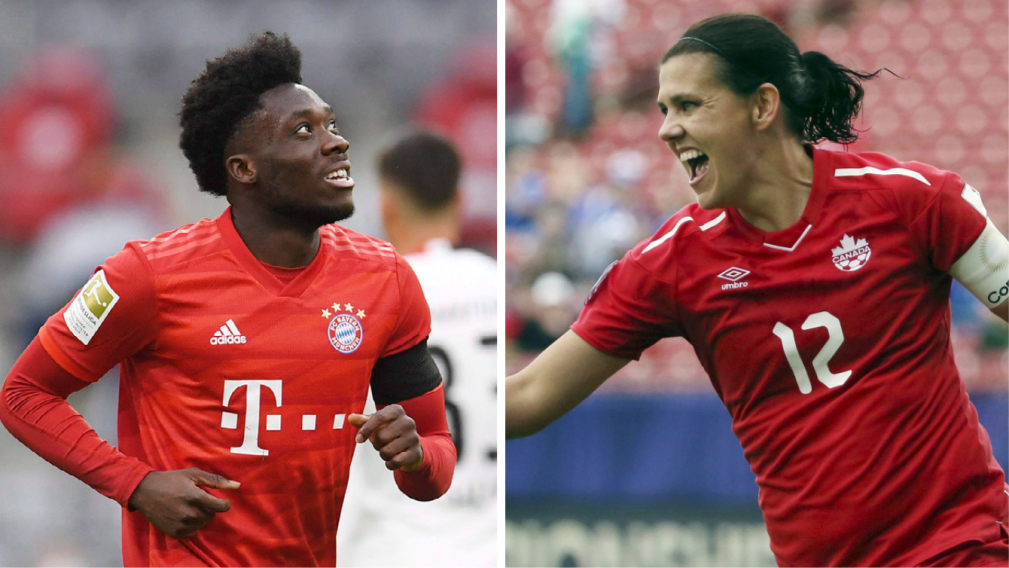 It’s been quite the year for Canadian soccer. Historic performances, Olympic qualifications and now, two athletes of the year.

Christine Sinclair and Alphonso Davies have been awarded the Bobbie Rosenfeld Award and Lionel Conacher Award, respectively, as the 2020 Canadian Press Female and Male Athletes of the Year.

Sinclair wrote her name in the history books after setting the record for all-time international goals by a man or woman when she scored her 185th back in January.

Christine Sinclair has won the Bobbie Rosenfeld Award as the 2020 @CdnPressSports Female Athlete of the Year#TheBestInCanada 🍁🏆 #CANWNT pic.twitter.com/46uKaeqehT

The B.C native’s record-breaking performance came at the Concacaf Women’s Olympic Qualifying Tournament in Edinberg, Texas where she scored two goals against St. Kitts and Nevis to reach the incredible feat. Her 184th tied American Abby Wambach’s record, while her 185th made her the highest-scoring international ever.

A few days later she added number 186 as Team Canada continued towards booking their ticket for Tokyo 2020.

Sinclair previously won the Rosenfeld Award after leading Canada to a bronze medal at London 2012.

At just 20-years-old, he became the first Canadian international man to ever win a UEFA Champions League trophy, was named Rookie of the Year in the Bundesliga and went on to be included in the Champions League’s squad of the season – becoming the first North American to make the men’s all-star roster.

Earlier this month, Davies was also named a co-winner of the prestigious Lou Marsh Award as Canada’s Athlete of the Year alongside Superbowl Champion Laurent Duvernay-Tardif.

He’s the first soccer player to claim the Lionel Conacher Award, joining the likes of Wayne Gretzky, Mario Lemieux, Gordie Howe and Donovan Bailey. He is also the first athlete from a European-based professional club to ever win the award.

Alphonso Davies and Christine Sinclair earn CP athlete of the year honours
Shuttlecock and balls: The fastest moving objects in sport
Getting vertical: The highest jumps in sport
Weekend Roundup: Team Canada athletes glide to the podium worldwide
Korea 101: Korean Customs and Traditions
What are the differences between baseball and softball?